The key to defeating Fast Track is the House of Representatives. That has been the message of groups like Citizen Trade Campaign for years and remains true today, where proponents of the bill report they are twenty votes short. 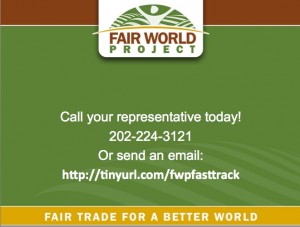 We’ve reported before that the growing opposition to Fast Track includes hundreds of labor rights, environmental, and sustainable agriculture advocates, but also businesses, food writers, and legislators as well (including 110 state legislators from 41 states who recently sent a letter to Congress).

After a roller coaster week, the Senate will begin debating Fast Track next week. It is expected to pass, but that vote will not mean defeat. What is important in the Senate is the momentum it brings to the House of Representatives. This is why the initial rejection of cloture, the procedure that brought the bill to the floor for debate, was a major victory. Proponents hoped to build momentum by bringing it to the floor and passing it quickly. When that did not happen, a strong signal was sent to the House that this is not a popular bill.

After gaining some concessions, enough Senators who initially voted against bringing Fast Track for full debate have now voted for it. Although it will eventually pass, opponents can still keep the victorious momentum. As Senator Sanders of Vermont explains: “Time is on our side. The longer we keep it on the floor, the more the American people understand what a disastrous agreement this is, the better it is for us.”