Small-scale farmers are vital in the agricultural infrastructure, producing most of our food on small pieces of land. Yet smallholders are under tremendous pressure and face many obstacles in keeping their land and continuing to produce food and fiber including unfair global trade agreements and lack of access to resources

We believe we need to advocate for fair global trade agreements that not only benefit farmers and workers, but give them a seat at the table in forming policies that affect them. We also believe that market initiatives intended to benefit farmers, like fair trade certification, must be meaningful, clear, and farmer led.

In this action center, you can take actions for fair trade policies and strong market initiatives. 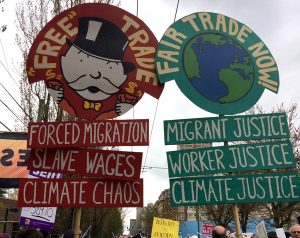 We stopped the TPP!

The Trans Pacific Partnership (TPP) would have been a disaster for farmers, workers, public health, and the environment. That’s why we joined with allies to fight against it. FWP’s network sent tens of thousands of letters to Congress opposing this unfair trade agreement. Thanks to grassroots momentum like this, the U.S. withdrew from the TPP. But we still have lots of work to do to fill the void and ensure fair trade agreements take hold. Read a description of civil society priorities for NAFTA, the principles of which can be applied more generally 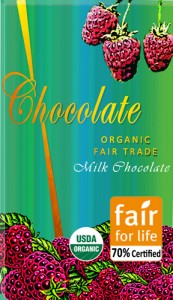 Fair For Life is one of the only fair trade certifiers to insist that at least half of the ingredients in a multi-ingredient product like a chocolate bar are actually certified fair trade. Major certifiers Fair Trade USA and the Fairtrade System only require 20% of ingredients to be certified. In 2016 Fair for Life threatened to change that but FWP, committed brands, and thousands of consumers spoke up. In response, Fair for Life committed to keep the requirement that the majority of ingredients in composite products be certified. Our reference guide gives a snapshot of the strength of various eco-social labels. 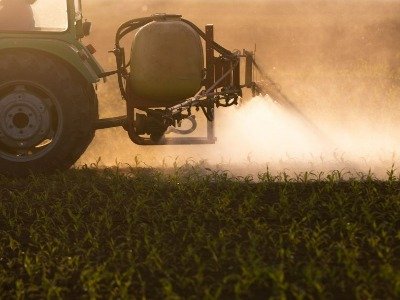 Every country should be able to set standards for safe food for its people. But when Mexico announced it would be banning GMO corn, newly leaked documents reveal that U.S. government officials colluded with the biotech industry to bully Mexico into reversing course. Take action and send a letter to the Office of the U.S. Trade Representative to demand that the U.S. government respect Mexico’s right to protect its citizens and environment. 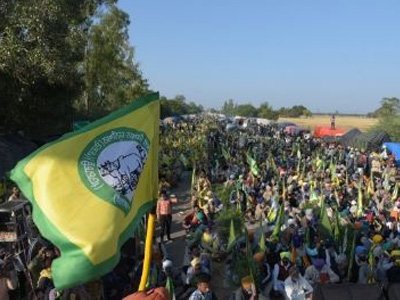 Join in Solidarity with India’s Farmers and Farmworkers

The protests in India may feel far away. But the farmers and farmworkers leading the demonstrations are calling for justice, for fair livelihoods, and a voice in their futures – values that are close to home for all of us. In September 2020, the Indian government undemocratically passed three new agricultural bills. Farmers have decried the bills as putting corporate profits above their own rights and livelihoods. Add your name along with individuals and organizations around the world who are joining in solidarity with India’s farmers and farmworkers. 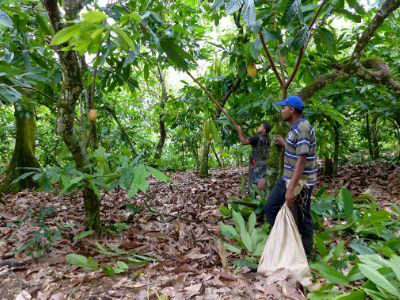 After 10 years of buying cocoa for the UK version of their KitKat bars on fair trade terms, Nestlé has backpedaled. They have announced that they are dropping Fairtrade certification and switching to Rainforest Alliance and their own proprietary Cocoa Plan. And the timing couldn’t be worse as they walk away from small-scale farmers in the midst of a global pandemic.

As the current COVID-19 pandemic spreads around the globe, it is hitting hardest those already lacking access to the basics. Before the pandemic, cocoa farmers in West Africa were already struggling on an average of just $0.78/day. That kind of extreme poverty is no accident. It’s how Hershey’s managed to extract $1.15 BILLION in profits in 2019. That’s more per share than an average farmer earned in a week. Those profits and the already dire conditions for cocoa farmers means that it is high time Hershey’s pay cocoa farmers fairly and commit to more emergency relief for cocoa farmers. 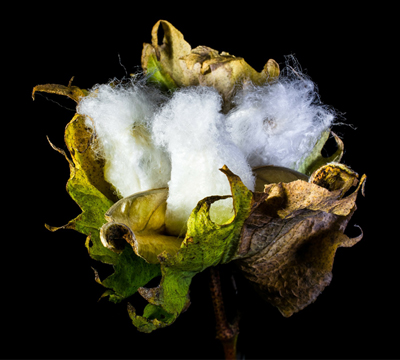 If you see an ad for “Fair Trade Denim Jeans,” you might assume it was made out of fair trade denim, using fair trade cotton. But Madewell and their parent company J. Crew are leading you on. The fair trade label they’re using just skims the surface of the complex fashion supply chain and only applies to the final stage of production.
Tell Madewell and J.Crew, drop the fairwashing and put your money where your marketing is. Commit to fair trade cotton and support small-scale farmers. 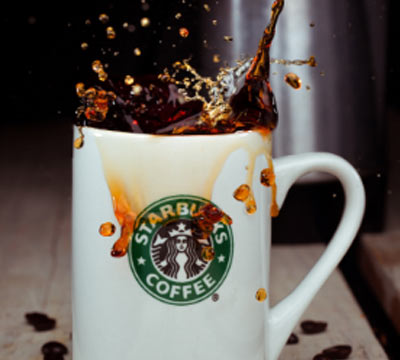 Workers have been found in slavery-like conditions on Brazilian plantations selling to Starbucks for the second time in nine months. Starbucks holds up their C.A.F.E. Practices standards as their commitment to source “99% ethical coffee.” But standards are glossing over a serious problem. Instead of making real change, Starbucks is trying to rebrand forced labor and slavery-like conditions as “ethical.” But we won’t let them get away with it.

It’s time for Starbucks to commit to real fair trade. 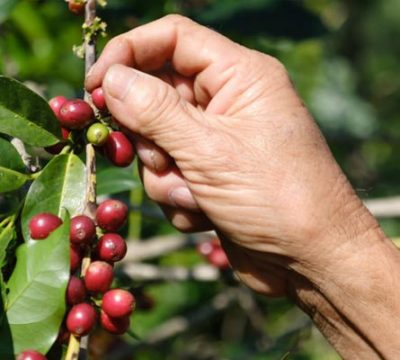 “With $0.90 per pound we cannot live.” That’s the message that the coffee farmers behind SPP Global sent to the global coffee industry in April. Coffee prices have hit historic lows over the past year and continue to stay there, well below the cost of production.

Add your name in solidarity with coffee farmers – no one should starve for coffee.

Climate change is not the only threat to cocoa farmers. Low and volatile prices are threatening farmers’ livelihoods in the short-term. Costco can have meaningful impact on the livelihoods of cocoa communities and the environment. 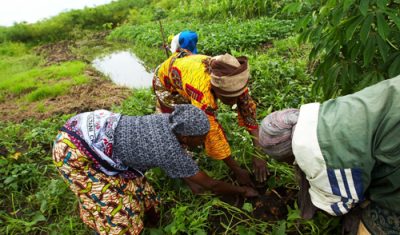 In 2017 the Small Producers Symbol issued a call to the fair trade movement to exclude those companies that reproduce traditional patterns of exploitation, abuse, and concentration of wealth and power and to keep fair trade a movement of democracy and solidarity centered around organized, small-scale producers. Sign the petition in solidarity with these fair trade farmers.

When you pick up a fair trade melon, or any fair trade product, you expect that it means the farmers or farmworkers who grew it were treated fairly. Unfortunately, that’s not currently the case. This spring, Fair Trade USA decided to certify multinational Fyffes’s Honduran melon plantation Suragroh despite ongoing human and labor rights violations. 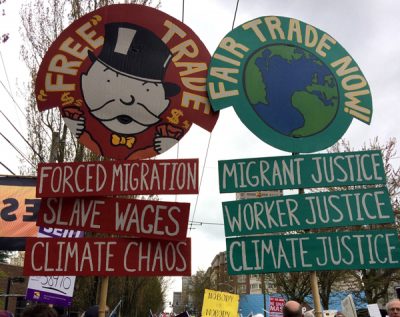 Leaders in all three participating countries are currently in talks to renegotiate NAFTA. Throughout the process, President Trump has periodically threatened to pull out all together. We do need strong international trade agreements, but we need them to be fair and fairly negotiated. Let Congress know you support a fair NAFTA.

Fair Trade is Movement, Not a Market Niche

As the fair trade market grows, more brands adopt fair trade labels without fully committing to the fair trade movement. Green Mountain Coffee Roasters, Honest Tea, and Starbucks are all major corporations that have advocating for unfair trade policies through membership in organizations like the Grocery Manufacturers Association or directly as members of corporate trade advisory committees. Unfair trade agreements harm small-scale farmers globally on a scale that is not mitigated by labeling a small amount of product fair trade. Over 10,000 consumers wrote to these companies asking them to end the hypocrisy and start advocating on behalf of farmers not against them. Unfortunately, none of these companies budged on their positions. FWP continues to advocate not only for fair trade policies, but for companies using fair trade labels to make a full commitment to small-scale farmers. 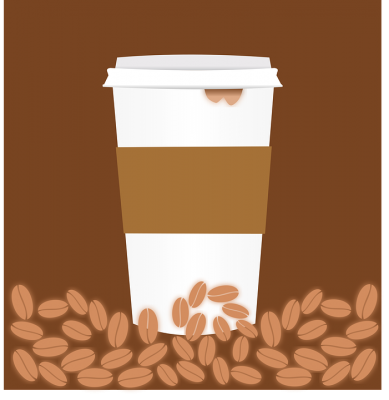 Tell Starbucks to Speak Out Against Fast Track

Over 5,000 people wrote to Starbucks in the spring and summer of 2015 asking them to speak out against Fast Track and the TPP and to use their influence to demand fair trade policies for farmers. After receiving unsatisfactory responses, many people also made follow up phone calls and Fair World Project wrote a letter to Starbucks CEO Howard Schulz. Starbucks has been unwilling to engage in this conversation and points only to their commitment to “ethical” purchases of coffee, apparently willfully ignorant of the fact that trade policies like the TPP have the potential to harm farmers beyond the point at which ethical purchasing can help. We hope that Starbucks will eventually take these concerns seriously. In the mean time, we continue to promote fair roasters who advocate for fair policies to supplement their fair buying relationships with farmers.

Fast Track is the nickname for Trade Promotion Authority, the power Congress grants the President to negotiate a trade agreement which can later be approved or denied but not amended. Fast Track makes it more likely that a bad trade deal is approved. FWP advocates for fair and transparent negotiation processes for trade deals and opposes Fast Track. We facilitated thousands of letters asking Congress to withhold Fast Track authority ahead of the pending Trans Pacific Partnership (TPP). Unfortunately, Fast Track passed, though there was not ultimately support for the TPP. 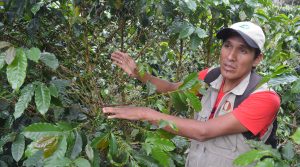 After Fair Trade USA (FTUSA) opened up certification to coffee plantations, FWP facilitated a letter-writing campaign asking Starbucks and Green Mountain Coffee Roasters, two of the largest roasters that are FTUSA licensees, to decline participation in this program. Thousands of concerned consumers sent letters to Starbucks and Green Mountain and directly to FTUSA. FTUSA continues to certify coffee plantations, creating unfair competition for the smallholders who lead the fair trade movement.

In the period of 2012-2016, the U.S. was in talks to negotiate two massive trade agreements, the Trans Pacific Partnership (TPP) and Trans Atlantic Trade and Investment Partnership (TTIP). FWP, along with a community of allies representing farm, labor, and environmental interests, continually expressed concerns about both the secret process by which these agreements were negotiated as well as the specific provisions that would harm farmers, workers, public health, and the environment. We facilitated letters to the President and Congress asking for transparency and fairness, participated in street actions and concerts, and published articles. We continue to advocate for all international trade agreements to be fair to all. You can learn more by watching our Free Trade vs. Fair Trade video.