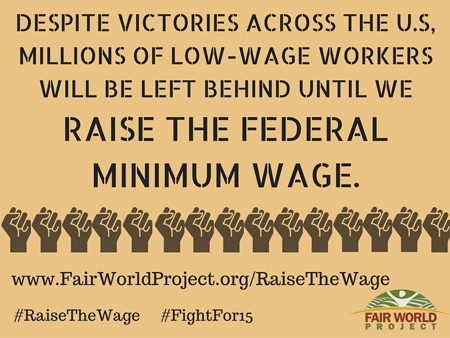 The Fight for $15 is sweeping the nation. Thousands of workers, notably in the fast food sector, have staged coordinated strikes. California recently passed legislation guaranteeing a minimum wage of $15/hour for all workers to be phased in over the next several years. New York followed close behind with legislation that will guarantee workers in the metropolitan area an eventual $15/hour raise and workers upstate at least $12.50 with a goal of $15.

Several states and cities are considering minimum wage increases this year. Some, notably Washington D.C. may go as high as $15.00/hour.

Millions of low-wage working families will benefit from local, sector, and corporate victories and this movement is inspiring to the broader just economy movement.

Yet these successes stand in stark contrast to the silence of the federal government.  Despite wide-spread support for raising the minimum wage, the federal minimum wage has been stuck at $7.25/hour since 2009. The last federal proposal to raise the wage (to only $10.10 an hour) never made it to a vote. Now two proposals to raise the minimum wage (one to $12.50/hour and the other to $15/hour) have been introduced, but Congress is making no progress bringing both of these forward either.

This is unacceptable. A full 21 states, where millions of low-wage workers live, match the federal minimum wage. (Five states have no minimum wage law and match it by default). As other states move quickly to raise the minimum wage, workers in these states are stuck with poverty wages.

It is especially egregious because in many of these states, workers have no option to increase the minimum wage at the local level. In early 2016, the city of Birmingham, Alabama announced an increase in the city’s minimum wage. State legislatures quickly worked to strike this increase down, through pre-emption, a tool by which states can invalidate local law and enforce statewide conformity. Alabama is not the only state to prevent its cities and towns from raising wages above the state minimum. Nearly 20 states have similar laws.

We need to raise the federal minimum wage to ensure that all workers are paid a fair wage. Leaders in states like California and cities like Seattle have proven it is possible to raise the minimum wage. Support has been strong enough to pass legislation with no negative impacts from early stages of implementation. Now is the time to raise wages for everyone.

Tell Congress you support raising the federal minimum wage for all workers, in all states, including wages for workers like farmworkers and tipped workers who are sometimes left out of minimum wage laws.