Five Lessons for Organizing Emerge from a Berry Farm

One of the most significant highlights of 2016, for me, was the phone call I received the night before Labor Day to inform me that Familias Unidas por la Justicia and Sakuma Brothers Farm had signed a legally binding agreement outlining how the two parties would settle a four-year-long labor dispute on Sakuma Brothers’ berry farm in Washington State. Sakuma Brothers is a major supplier to Driscoll’s, the largest distributor of berries in the world, and to Häagen-Daz ice cream brand, among others. Until this year, management at Sakuma had refused to recognize the farmworker union, denying them the right to collective bargaining and undermining the spirit of freedom of association.

In my capacity as campaign director at Fair World Project, I spent the summer facilitating dialogue between worker representatives of Familias Unidas and executives at Sakuma. Prior to the agreement in September, Familias Unidas had won concessions through a series of walkouts and lawsuits over the years. A landmark lawsuit in 2015 won paid breaks for farmworkers not only at Sakuma Brothers Farm, but throughout the state of Washington. Tensions were high. It had been several years since union representatives and management had come to the table to try to amicably work out their differences.

In May 2016, Fair World Project mobilized thousands of consumers and dozens of organizations to sign a letter in solidarity with Familias Unidas. Following this, Fair World Project was invited to play a role in facilitating the dialogue between Familias Unidas and Sakuma Brothers Farm. The September agreement was a historical moment and outlined a way forward for both organizations. It focused their attention away from historic tensions and differences and toward their shared interest in the viability of the farm. 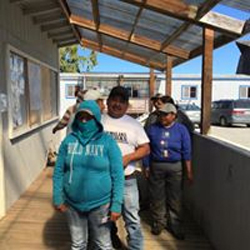 Included in the agreement were parameters for an election to verify Familias Unidas as the chosen representative of the berry pickers as well as terms for a subsequent contract negotiation. Because farmworkers are excluded from the National Labor Relations Act, which establishes the framework for unions and collective bargaining for most other workers, there are few farms where workers have organized and even fewer independent unions.

As I think ahead to 2017 and ponder the current divisive political climate, what I learned on my journey this year has given me hope and also provided some concrete lessons to inform my organizing going forward. These lessons may be useful to others concerned with food security, worker rights and economic justice, as well.