In June of 2017, as part of their annual general assembly, Símbolo de Pequeños Productores (SPP), known for their Small Producers’ Symbol certification program, issued a statement assessing the state of fair trade, as well as a call to action for all of us in the fair trade movement. For more historical analysis and the full text of the call to action, go to https://fairworldproject.org/blogs/small-scale-farmers-issue-urgent-call-to-save-fair-trade/. The following has been condensed and edited for clarity.

Currently, there are millions of small producers who, through their organizations, have attained greater value for their products and have generated considerable improvements in their living conditions. They have also built their capacities for generating processes for local development, well-being and political influence. There are numerous examples of small producer organizations that have built local processing plants, financial institutions, women’s and youth organizations, health clinics, and education and training centers.

Fair trade has shown itself to be a successful model for capacity building and an excellent path for marginalized producers to enter the market under more fair conditions. Fair trade has thus become an example and a source of inspiration for generating sustainable, inclusive development models.

From our perspective, the keys to the success of fair trade are, and have been from the beginning, the following basic mechanisms:

Under fair trade principles and values, these basic mechanisms generate well-being, through increased local management capacities to achieve multiple economies, as well as through social and environmental benefits.

For businesses and consumers, fair trade has become an opportunity to directly influence the economic, social and environmental sustainability of the products they trade or consume on a daily basis.

Not Just Another Commodity 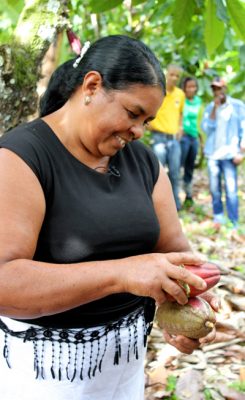 Unfortunately, we currently find practices and models under the “fair trade” banner that have little or nothing to do with trade that is genuinely equitable and fair – that is, inclusive and based on solidarity. This signifies a risk to the continuation and survival of the fair trade model.

To begin with, the inclusion of production models used by large producers has introduced unfair competition into fair trade. This is, first of all, because the structures of production costs and the organization of a large-scale private company are different than those of an organization of small producers. Thus, what can be considered a fair trade guaranteed price is different for each.

Secondly, another element of unfair competition is the incorporation of raw materials produced by non-organized individual producers, which are processed and/or traded by private companies into fair trade models. The reasoning is the same as in the case of large producers, given the different cost structures and diminished benefits and values.

Thirdly, and perhaps most importantly, fair trade has opened its doors to large transnational companies. Collaboration with transnational brands, such as Nestlé, Dole and Mondelez (which includes Cadbury, Nabisco, etc.), who have tarnished images and a long history of acting counter to fair trade values, has caused fair trade to be seriously questioned and even discredited.

Today’s fair trade is no longer what was historically promised, nor what it once was – an alternative model of solidarity trade. It has become one more product in the conventional free market trade system. This has led many companies that are genuinely committed to fair trade to abandon the most common schemes of fair trade certification and promotion, preferring instead to invest in their own image as a fair trade brand and leaving behind a commitment to the fundamental fair trade mechanisms for small producers.

Another reason that some companies and consumers have distanced themselves from fair trade is that they question the high costs of fair trade certification and labeling systems. For many organizations and companies, certification costs and the bureaucratic process involved exceed the benefits they might receive in terms of promotion and guarantees.

Rigid fair trade certification systems lead to the loss of the original role of fair trade as an instrument for development and ongoing improvement. Instead, the fair trade market has become exclusive, and companies and small producer organizations are left on the sidelines, obliged to turn to unregulated trade schemes, such as so-called “direct trade,” leaving producers and consumers without the necessary guarantees and transparency offered by fair trade.

Fair trade managed to create a boom by introducing solidarity trade to supermarkets. Now, we have the challenge of changing the rules with these supermarket chains, or needing to consolidate alternative channels of distribution with the capacity to reach the mass consumer market.

Join the Movement to Transform Trade!

Although fair trade currently represents a small percentage of world trade, the achievements realized have been significant for millions of families in thousands of communities and towns in the Global South.

We will continue to create local and international fair trade markets based on the values of horizontal and participative democratic organization, equality, equity, solidarity, economic justice, and environmental, social and ecological sustainability. We will continue to work for genuine, profound, inclusive and democratic fair trade that truly transforms the way in which markets and economies are established.

We must come together and bring new life into fair trade!

To read the full text of the SPP call to action and add your name, go to:

For us, fair trade was created to establish an alternative market that would operate differently, and not incorporate the actors, structures and practices of conventional markets, as many “fair trade” entities are currently seeking to do.

From our point of view, the “original” fair trade values and principles include the following:

Participatory Democracy, both for producer organizations and in other fair trade companies, networks and institutions.

Self-Management and the self-determination of grassroots solutions.

Collectivity as the path to reach common goals together.

Solidarity because shared problems require collective solutions for all.

Justice through clear, fair rules that are adapted to local contexts.

Equity to build an economy where all can be active participants, and the weakest become stronger.

Transparency as an essential component of democratic organizations.

Trust to grow relationships based on collaboration, open dialogue and negotiation.

Prospects for Children and Youth both to have opportunities for education and to share in their families’ work.

Promotion of Equality of Men and Women through opportunities for women, while acknowledging the diverse realities and cultural visions of communities.

Respect for Local Cultures whose languages, customs and key values may differ.

Small Scale which benefits local economies all along the supply chain.

Direct Trade which connects producers and consumers in the closest commercial relationships possible.

Quality in goods and products, wherein producers are compensated for the efforts it requires.

Sustainable Prices which cover all the costs of production.

Strong Local Economies which support dignified, sustainable livelihoods for marginalized communities and the generations to come.

Respect for the Environment as a basic requirement for fair trade organizations and society in general.

Respect for Health, wherein toxic substances or processing methods have no place in fair trade production.