United States farm incomes, following sinking crop prices, sharply declined in 2016 for the third year in a row. 1 Prices for wheat and corn are currently at ten-year lows, and in many cases U.S. farmers are paid below the cost of production for what they produce.2 While these low prices hurt U.S. farmers, when the crops are exported by global grain companies, the collateral damage is felt by farmers around the world.

There are strong signs that the harmful practice of agricultural dumping (exporting crops at below their cost of production) is already occurring. A new analysis by the Institute for Agriculture and Trade Policy (IATP) finds that export dumping by U.S.-based agribusiness onto international markets has increased dramatically in the last few years. The latest data indicates that in 2015 the dumping of wheat was at 33% below the cost of production, soybeans at 11%, corn at 14% and rice at 2%. Most government and industry projections show low prices continuing in 2017.

The effect of agricultural dumping on farmers outside the U.S., particularly those in developing countries, can be devastating. In our increasingly globalized world, farmers not only operate within their local market, but also within the international market. The U.S. exports around 20% of the agricultural commodities it produces, over $130 billion worth in 2015, to over 100 countries. When a surge of under-priced imported food hits, it can push farmers out of business — contributing to the long-term global trend of rural depopulation. Agricultural dumping undermines local production, infrastructure for local food systems, and local economies. While cheap imports may provide consumers with some benefits in the short-term, reliance on international markets also makes countries more vulnerable to the volatility of those markets. For example, when agricultural prices spiked in 2007–2008, countries dependent on imported food were hit the hardest.

The practice of agricultural dumping today can be traced back to three big policy decisions in the mid-1990s. The domino effect of those decisions helps to explain why the U.S. produces so much corn, soy, wheat and rice, often much more than what is needed, to the detriment of farmers in the U.S. and around the world.

First, in 1994, the North American Free Trade Agreement (NAFTA) between the U.S., Canada and Mexico came into effect. The agreement aggressively reduced agricultural tariffs in each country, seeking to build a North American market. The result was a wave of under-priced U.S. corn dumped into Mexico, pushing an estimated two million Mexican farmers off the land. NAFTA has served as the template for all ensuing U.S. free trade agreements.

Second, in 1995, the World Trade Organization (WTO) and its Agreement on Agriculture came into being. The WTO set overarching trade rules for more than 160 countries around the world, primarily through obligations to lower tariffs. While the WTO did establish arcane rules on the types of programs and subsidies countries use to support farmers, it notably did not address agricultural dumping and its threat to farmers and food security.

Third, in 1996, Congress passed what was known as the Freedom to Farm Bill, which provided the final nail in the coffin of long-standing farm programs that helped manage supply and ensure fair prices for farmers. Farm programs coming out of the New Deal era linked price floors to ensure farmers received a fair return, with the use of supply management tools, to help manage the volatile nature of farm production from year to year. But agribusiness did not like the government meddling in farm production or prices, and for decades it has steadily worked to erode those programs, urging farmers to produce more and “get big or get out.” The 1996 Farm Bill was the final step in a relentless push by agribusiness to get farmers to produce ever more to feed the companies’ hunger for global markets.

Low prices for farmers and agricultural dumping onto international markets are not acts of God.

The most recent Farm Bill (passed in 2014), despite undergoing a series of reforms, retains its focus on producing crops and meat for global markets. It places no limits on production, rewards farms of larger size, and incentivizes the production of commodity crops. While the type of farm subsidies in the Farm Bill has evolved over the last several decades, transitioning from direct subsidies based on acreage to now different forms of revenue insurance linked to farm income, the intent to provide farmers with a safety net when the market drops is largely the same. The recent collapse in crop prices, however, has exposed weaknesses in the current Farm Bill. Some farm groups have called for an early intervention because current farm policy fails to adequately protect farmers experiencing consecutive years of low prices. 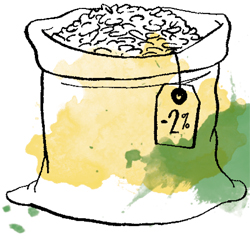 NAFTA, the formation of the WTO, and U.S. farm policy were all driven by the interests of global agribusiness, and it is those companies that have benefitted tremendously. Those companies, which operate in both developed and developing countries, include the four big commodity traders who have dominated international markets for decades (Cargill, ADM, Bunge and Louis Dreyfus) and the big meat companies (including JBS, Tyson’s and Smithfield) who depend on cheap animal feed.

Increasing disruptions of global agricultural supply chains linked to climate change should drive a new sense of urgency to fix agricultural and trade policy. Countries need to adapt their agricultural production to a changing climate, support farmers in the field, and strengthen their own food systems, including the use of food reserves (retaining food in times of plenty for times of scarcity). Low prices for farmers and agricultural dumping onto international markets are not acts of God. They reflect deliberate policy decisions, and we can make different decisions for the future.

First, President Trump promised to reform NAFTA. Based on the corporate and financial connections and backgrounds of his Cabinet members, though, it is unlikely that the impacts of agricultural dumping on farmers will be at the top of his administration’s NAFTA priorities. Civil society organizations in the U.S., Mexico and Canada are already organizing around positive reforms of NAFTA that would stop agricultural dumping, support fair wages and enable climate action. To support these efforts, connect with the Citizens Trade Campaign, a strong coalition of family farm, labor, environmental, health and faith organizations, by going to: www.CitizensTrade.org.

Second, we need to reform the Farm Bill to focus more on fair prices for farmers, while integrating environmental sustainability and climate resilience. The National Family Farm Coalition (NFFC) is an alliance of more than twenty organizations around the country working for substantial Farm Bill reform. To connect with the NFFC and their Farm Bill campaign, go to: www.nffc.net.

Farmers and eaters can benefit from more stable and resilient markets for agriculture in the future — but we will first have to undo the damaging policies of the past.

1 For more information, go to:
https://tinyurl.com/USFarmIncomes

2 For more information, go to:
https://tinyurl.com/10YearLows