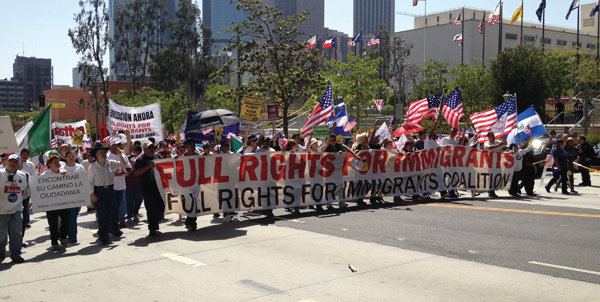 As we all know, fair trade and immigration are two interconnected issues. Unjust free trade agreements and international trade policies have forced family farmers off their lands and decimated domestic industries in other countries. Many people have few choices other than migrating in search of work, safety and a better life for themselves and their families. Many of these migrants cross the border to become farmworkers and other food system workers in the U.S.

Almost twenty million people in the U.S. work in the food system, and more than half of the workers in some food industries are undocumented immigrants. The Food Chain Workers Alliance 2012 report “The Hands That Feed Us” concludes that undocumented workers are often vulnerable to abuse and exploitation because of their immigration status. In fact, we found that undocumented workers were over two and a half times as likely to earn less than the legally-required minimum wage as compared to documented workers.

This past summer, the legislative agenda of Congress and the Obama Administration included a major immigration reform bill. While the attention to immigration reform was more than welcome, many of the specific provisions considered from the beginning were very problematic. For example:

Advocates worked to minimize the damage of immigration reform in this round, but what should we do then to advocate for fair trade and immigrant rights from the start? 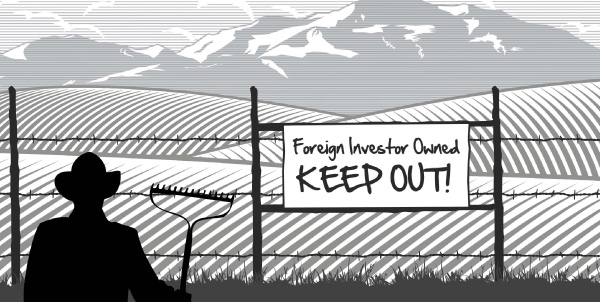 Conflicts between small-scale farmers or farmworkers and foreign investors have been raging for decades, if not centuries. The pace and scope of land grabs over the last few years, however, is new. In the decades leading up to the 2008 food and financial crisis, free trade and investment agreements created the legal conditions for land grabs, but low commodity prices depressed the demand for farmland in developing countries. When food prices spiked, there was a rush of new investments by corporations, financial investors and sovereign wealth funds, many of which were not directly involved in food production.

Millions of hectares have since been leased or sold, often without the knowledge or consent of the communities who will be most affected by those decisions. The Land Matrix (www.landmatrix.org), a new collaborative Web tool, has documented more than 1,000 cases involving nearly thirty-three million hectares. The site tracks deals (involving 200 or more hectares) made since 2000 that involve the conversion of land from smallholder production or community use in low- and middle-income countries. Other estimates have ranged as high as 100 million hectares.

There are several overlapping challenges here. First, land tenure laws are unclear in many countries. Under the customary laws prevalent in many African countries, for example, community elders might sign off on land deals without consulting the people farming those lands. Or, decisions can be made far up the chain in remote bureaucracies. In any case, the idea that these lands are somehow vacant blank slates just waiting for new investments is usually flat wrong, and expanding industrial agricultural production (often for export) in delicate ecosystems (where farmers may practice shifting cultivation) can have devastating social and environmental impacts.

Who are the land grabbers? Some are national governments lacking capacity for local production and feeling burned by recent failures in global markets. But much of the grabbing is being done by banks, sovereign wealth funds, pension funds and hedge funds looking for the next new target for innovative investments. The rising demand for biofuels also creates new incentives for investors interested in exploiting this huge new market. The investment fund TIAA-CREF, for example, launched a new fund for investments in farmland. In that case, and with similar investments by pension funds and hedge funds, the firm purchases land outright or leases it for decades into the future. They are assuming that land prices will continue to rise as demand for food production increases, and that assumption itself, along with the volume of new investments, puts upward pressure on land prices and therefore even greater pressure on farmers around the world.

In tracking land grabs, the Land Matrix came up with some surprising conclusions. It turns out the land grabbers often bite off more than they can chew, buying or leasing hundreds of thousands of hectares, when it turns out they can only cultivate about 5% of that amount. In many cases, the deals shrink or collapse, but in others the foreign investors simply hold on to the property rights, biding their time for a better deal down the road.

The solutions, like the problem, are complex. Campaigns to challenge specific land grabs are emerging every day, led by such groups as the Oakland Institute. Campaigns and stunts in Europe, led by the World Development Movement, convinced at least a few investment firms to divest from land. At the international level, efforts are underway to move the UN Voluntary Guidelines on the Responsible Governance of Land Tenure from an innovative tool of soft law to something real and enforceable. All of these efforts, along with others challenging free trade and investment agreements (like the Trans-Pacific Partnership) that are driving these bad deals, are needed to help keep land in the hands of farmers around the world.

For more information on the causes of land grabs, see Land Grabs and Fragile Food Systems: The Role of Globalization by Sophia Murphy.