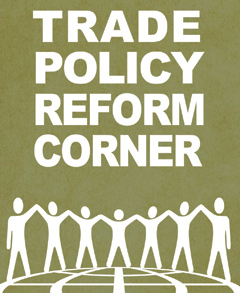 NAFTA has had negative and often unintended consequences for many people in North America, including farmers, workers and consumers. An example of some of these consequences can be seen in the infographic on the previous page.

Right now, there is a similar trade agreement being negotiated by twelve countries, including the U.S., Mexico and Canada, called the Trans-Pacific Partnership (TPP). The TPP threatens to have effects similar to NAFTA, but on a larger scale, threatening human rights, the environment and jobs.
Late in 2012, a group of labor leaders, trade justice advocates, family farmers, environmentalists, food sovereignty groups and others from the U.S., Canada and Mexico created a “North American Unity Statement Opposing NAFTA Expansion through the Trans-Pacific Partnership (TPP),” with the goal of uniting 1,000 organizations in opposition to the TPP.

The statement reads in part:

“The nearly two decades of economic, environmental and cultural damage wrought by the North American Free Trade Agreement (NAFTA), while by no means experienced equally, have been highly detrimental to the majority of people across the North American region. As a direct result of NAFTA, there are fewer good jobs, more struggling family farms, less stable food systems, and everyday consumer safety measures are weaker and social inequality grows. … It has degraded the earth and its ecosystems in numerous ways, including from mining and other resource extraction projects, and has had pronounced effects on indigenous peoples’ sovereignty. Subsequent trade agreements have similarly propelled a race to the bottom in wages, labor rights and environmental protection, as well as deregulation and privatization, contributing to the worldwide financial and climate crises.”

“Halting further damage should be a shared priority of our peoples. … The world cannot afford this NAFTA expansion package. Instead, we need policies that help build a more just and sustainable global economy, including those that respect and promote fundamental labor rights, including: equal rights for migrant workers; the creation of high-wage, high-benefit jobs; environmental protection; food sovereignty; financial market stability; food and product safety; access to quality healthcare; and local democracy. Together, we call on our sisters and brothers throughout North America and beyond to educate their communities about the TPP and to engage on it now, lest we all have even greater harms forced upon us and the people of many other countries.”

Fair World Project signed on early in support of this statement because we believe the expansion of detrimental “free trade” policies through the TPP can and should be stopped, if we all work together. You can learn more and read the full statement here:
http://tppxborder.org/.