NAFTA of the Pacific Around the Corner 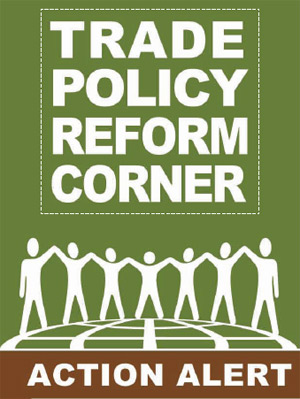 In April 2012, the United States’ “Free Trade Agreement” (FTA) with Colombia went into effect, despite tens of thousands of letters and calls from concerned citizens, including farmers, consumers, labor and environmental organizations objecting to the Agreement’s trade policies. The Colombia FTA continues the US’s failed trade policy that prioritizes corporate rule above local sovereignty, environmental and labor protections, and human rights. The Obama Administration is now promoting and negotiating the Trans-Pacific Partnership (TPP), also known as “NAFTA of the Pacific,” behind closed doors, with little civil society or even Congressional oversight.

18 years since the North American Free Trade Agreement (NAFTA) came into force, communities throughout the US, Mexico and Canada have witnessed the steady decline of quality of life and human rights. Proponents of FTAs have assured us that FTAs would create hundreds of thousands of jobs, raise living standards across the board, improve environmental conditions and elevate poor countries out of poverty.

Almost two decades after the “NAFTA experiment” the results are in: we’ve seen overall increases in Gross Domestic Product, but lower wages and greater income inequality; increased trade amongst member countries, but higher prices for basic items, like food and medicine; and a greater diversity of consumer products, but increased environmental degradation in participating countries. Overall, farmers in NAFTA countries, North and South, have borne the brunt of unfair trade policies, losing their land at a record pace, pushed out by industry consolidation and subsidies that prioritize corporate agriculture over family scale producers. Importantly, FTAs, like NAFTA, have created a binding legal framework where local and national laws can be challenged by corporations and overturned to accommodate new trading laws, with conflicts arbitrated by trade tribunals that are completely unaccountable to the citizenry. According to Public Citizen, since 1994 over $350 million public dollars have been paid to corporations under NAFTA for “compensation” for lost potential profits due to national and local environmental, zoning and labor policies, among others, restricting corporate operations. On the whole, FTAs have institutionalized supranational trade laws that have enriched local elites at the expense of people, the environment and community based economies.

Now, the United States Trade Representative (USTR) is negotiating an expansion of these policies as part of the TPP, to include not only Australia, Brunei Darussalam, Canada, Chile, Malaysia, Mexico, New Zealand, Peru, Singapore and Vietnam, but eventually other countries, like Japan, Korea, and China. It is poised to become the largest Free Trade Agreement in the world. The TPP is likely to impact jobs, wages, agriculture, migration, the environment, access to medicine, consumer safety, banking regulations, indigenous rights, internet freedom, government procurement and more. To date, the USTR has negotiated the TPP behind closed doors, without citizen or Congressional oversight, but with 600 corporate advisors. While economic globalization can work for farmers, workers consumers, and the environment, it must be responsive and accountable to people and the environment, not just business interests.