The Foodopoly, Trade and Democracy 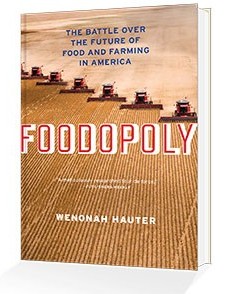 “OUR FOOD SYSTEM IS BROKEN!”

It is a rallying cry for foodies everywhere, but what does it mean? Sometimes, it is a plea to shop locally, or to buy organic. But none of these shopping choices alone gets to the heart of our broken food system — the very policies that got us here in the first place.

How did we end up with the food system we have today? Why are we as a nation obese and sick? Why can our farmers not survive growing the food we need? How did our environment become so polluted? In my book, Foodopoly: The Battle Over the Future of Food and Farming in America, I take a look at the policies that left us with a handful of companies controlling most of what we eat today. These are policies that led to the deregulation of food and farming. The result? Extreme consolidation that has helped Monsanto, Tyson, Nestlé, Kraft, Cargill, McDonalds and other giant food, agriculture and chemical companies to write our food policies.

To give you an idea of what consolidation of the food system means, only four companies process 80% of the beef we eat, and only four retailers sell 50% of the groceries we buy (with one out of every three dollars spent on groceries in the U.S. going to Wal-Mart alone). The top ten fast-food companies control 47% of all fast-food sales.

When these companies enjoy near monopolies in food production and distribution, they get to write all the rules, whether it is blocking attempts to limit the marketing of junk food to kids, halting popular efforts to label foods containing GMOs, or successfully fighting government regulation of unfair treatment of farmers by agribusiness.

What does consolidation look like specifically in the poultry industry? JBS, Tyson, Perdue and Sanderson slaughter and process more than 50% of the chickens consumed in the U.S. Because there are just a handful of players in the poultry market, these companies can call all the shots — and reap large profits. For every $19.00 twelve-piece chicken bucket from KFC, only $0.25 goes to the farmer who raised the poultry, while $3.00 to $5.00 goes to the chicken processor (and the rest goes to KFC).

This market power has detrimental impacts on the people who grow our chickens. These large companies use unfair contracts, require expensive equipment and building upgrades, and employ other aggressive tactics to squeeze poultry farmers, forcing them to produce more and more chickens for less and less money. The average contract poultry grower in the U.S. makes only about $15,000 per year.

The big poultry companies own everything, from the chicks and the feed to the trucks, the slaughter facilities and the brand. The farmer assumes all the debt associated with the operation, including the mortgages on the special buildings he has to construct in order to get a contract. The farmer also shoulders the utility expenses and the costs of removing waste and dead birds.

The environment suffers from this model as well. Concentrating poultry production means concentrating the amount of waste seeping off of factory farms into nearby waterways (like the Chesapeake Bay). What is worse, these big companies like Perdue leave the farmers to shoulder all the responsibility of dealing with the waste.
Consolidated market power effectively allows a handful of food, agriculture and chemical companies to contribute large sums of money to lobbyists in Washington, DC, and the disastrous Citizens United decision will just make corporate lobbying power even stronger. Not only do the largest corporations have the profits with which to lobby Washington, now they are able to do so unrestrained.

Today, we also have an international trade system that benefits the largest economic interests. Companies can sue governments over democratically enacted measures to protect consumers, communities and the environment. We have seen this with NAFTA which has opened the door for a natural gas company to sue Quebec for $250 million for lost profits because of its moratorium on the dangerous practice of hydraulic fracturing (or “fracking”) for natural gas. Under these expanded trade deals, corporations will similarly be able to sue state and local governments in the U.S. that have decided to ban fracking or to label foods containing GMOs, for example.

Accordingly, it is troubling that President Obama will attempt to fast-track two new “trade deals” — the Trans-Pacific Partnership (TPP) and the Trans-Atlantic Free Trade Agreement (TAFTA). These are much more than trade deals; they are permanent power grabs by corporations and their financiers. TPP and TAFTA will lead to increased natural gas exports (and thus more fracking) and increased food imports from countries whose farmworker and food safety standards are weaker than ours.

These trade deals will forever enshrine the very economic system that has led to an ever-greater imbalance in wealth and income, as well as to increasingly frequent economic crises. They will also be enforced by new international tribunals akin to the World Trade Organization (WTO), stripping communities and nations of their ability to live under their democratically enacted laws.

So, the next time you hear someone say that our food system is broken, think about all the things beyond food that this means — and about how we got here. We cannot just “buy local” or join a CSA. While it is indeed important to support our local food systems, we have so much more to do, because this is a problem we cannot shop ourselves out of. We need to be politically aware and active. If we do not take charge of our democracy by busting up our food monopolies, resisting corporate power grabs in the form of new “trade” agreements, and fighting the Citizens United decision, then our food system will only continue to get worse.

Fair World Project continues to track the status and potential impacts of international trade agreements like the Trans Pacific Partnership (TPP) and Trans Atlantic Free Trade Agreement (TAFTA). Click here to learn more and sign up for our newsletter for updates