Trade Aid has firmly established itself as the original and largest fair trade organization to operate in New Zealand. With New Zealand’s  population of only 4.3 million people, Trade Aid has had to evolve into a multi-category and multi-channel distributor in order to maintain consistent growth. Group annual sales now reach U.S. $15 million and continue to grow each year. The organization is comprised of thirty stores, packaged food wholesaling, green coffee brokering and, most recently, chocolate manufacturing.

Trade Aid was established in 1973 by Richard and Vi Cottrell, on their return from working with Tibetan refugees in India. In the early 1970s, New Zealand’s social justice movement was forming, and activists saw trading as a way to demonstrate new development theory. This new way of thinking about development was based on providing a means to earn money to people in developing countries and letting them decide what to do, rather than the accepted practice of imposing a donor “solution.”

The fair trade model that was evolving at this time, using trade as a vehicle for providing aid to those in need, provided a practical way to implement the theory. Inspired and motivated by this movement, Richard and Vi gathered a group together, forming a wholesale trading company owned by a non-profit incorporated society. Trade Aid’s journey had begun. As demanded by the various skills required to run the organization, it was an eclectic group, well described by one of the original directors as “on one side of the table, committed, respected, skilled city business people … on the other side, wide-eyed, idealistic, well-travelled revolutionaries, pumped full of liberation theology.”

“It was felt that those without land were poorer than those with land, therefore the focus would be on forming trading relationships with handcraft producers”

The wholesale operation grew rapidly with many “Third World” retail stores opening in towns and cities across New Zealand. The stores were completely independent from Trade Aid and each other, often with little knowledge of retail nor regard for financial outcomes. Within a short three years, a network of twenty stores had opened. The first flush of enthusiasm soon gave way to the practicality of maintaining and growing a business. These stores became known as “The Movement” and gradually began to function as a single entity, with stores operating under the Trade Aid name and with systems and financial controls in place.

Up until the early 2000s, the main focus was on handcrafts. The philosophy of Trade Aid has always been firmly on helping the “poorest of the poor.” It was felt that those without land were poorer than those with land, therefore the focus would be on forming trading relationships with handcraft producers. Handcrafts are a valuable proposition for economic development for a number of reasons. There is no, or low, capital cost required to set up; the work can be managed around other chores, especially important for women; the work can be done from home; and the work promotes solidarity and often maintains cultural and historical values. From a business perspective, though, trading primarily in handcrafts is difficult. It is a low-price, low-volume business, where making a profit is challenging, especially when you have retail stores in prime locations.

After thirty years of making very small surpluses, Trade Aid decided it needed to diversify into other categories that would meet its development criteria and  also bring much-needed profits to the business. The decision on with whom to form trading partnerships was determined first and foremost from a development perspective. Trade Aid has a unique structure where decisions on with whom to trade, and with whom not to trade, are made by a voluntary committee where the majority of members are non-staff and from a development background. By adopting this process, the company is able to maintain its mission to improve the lives of those with whom they trade without its own business needs determining the path followed.
In 2003, a decision was made to trade in green coffee beans, and eight tons (a half container) were purchased to wholesale to New Zealand roasters. At the time, it was seen as a huge risk, as there was only one customer who had expressed interest. Fortuitously, however, with risk comes reward. In a little under eight years, Trade Aid would be importing over 1,000 tons per year and supplying around 18% of the total New Zealand market for specialty coffee. 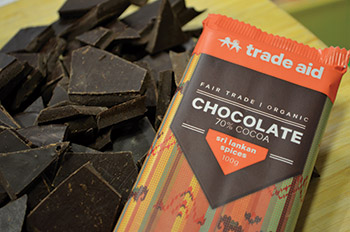 Trade Aid then decided that they needed to be able to offer double certification – fair trade and organic – and to offer various ways in which they could engage with the industry. This involved assorted options, from a basic wholesale service to full supply chain management. The move into the coffee industry was an outstanding success, providing another income stream with strong cash flow. At the same time, a mainly-organic packaged food range was launched, with sales expanding to supermarkets and organic stores.

Buoyed by the success with coffee, in 2013 a decision was made to move from importing fair trade chocolate from Europe to manufacturing chocolate locally. A chocolate factory in Sydney, Australia was purchased and moved to a newly-outfitted location in Christchurch, New Zealand in early 2014. Production began in September of 2014, and sales immediately rose by 300%.

The decision to become a manufacturer was not taken lightly. The business has always tried to push value down the supply chain, mainly through having some processing and all packaging done at the source. However, manufacturing chocolate requires a great deal of temperature control and reliable, low-cost power, which is not feasible in producer countries.

For us at Traid Aid, any new business venture is judged on the benefits it brings to the producer and whether or not it fits with the mission and charter of the organization. It must pass that hurdle before the business case is even considered. Traid Aid proves that marrying ethical production to smart business practices (cost and quality control), along with effective communication and the ethical treatment of consumers, can result in tremendous success.