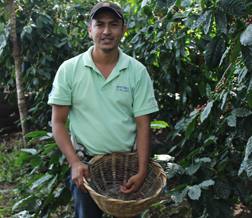 We leave Granada and drive a few hours through a beautiful lush landscape, horses and cows line the side of the roads, people selling honey and fruit as we make our way to Boaco, in the central part of Nicaragua. We are on our way to visit one of Equal Exchange’s coffee co-op partners to learn more about how small-scale coffee farmers are organizing in order to compete in a difficult global market that favors multi-national corporations working with large coffee estates that have access to capital, can take advantage of economies of scale and ultimately find it easier to reach the market shelves. We are visiting Tierra Nueva to learn why it is so important that small-scale farmers organize themselves so they can farm organically, stay on their land and feed their families.

Tired of going through middle men to sell their coffee that set the prices below cost of production and with the understanding of the importance of organic farming, in 1997 a coop was formed with 23 farmers. In 2000, they received their organic and Fair Trade certification (Fairtrade International – FLO-cert). The co-op quickly grew to 600 members and in 2004 smaller co-ops were formed. Today, Tierra Nueva is made up of 7 smaller co-ops; 6 organic coffee coops and 1 honey co-op with a total of 604 individual members throughout Nicaragua. Tierra Nueva is an umbrella co-op or secondary co-op that the members call the union, which provides services to the coop members. Secondary co-ops play an important role in fair trade and in creating an alternative economic system that puts people before profits. As many secondary coops Tierra Nueva works on policy transformation at the national level on issues ranging from gender equality to organic farming.

Tierra Nueva also trains their members on organic farming techniques and quality control and helps them reach international and domestic markets. Currently they only sell 50% of their coffee on fair trade terms the rest is sold into other markets. We were pleased to learn that they are registered with FUNDEPPO, the Small Producer Symbol, the producer-led certification system which Equal Exchange and other committed fair trade coffee brands in the US and Europe are working with to help differentiate small-scale producer products in the marketplace. Tierra Nueva also works with European committed fair trade brands such as GEPA in Germany and EZA in Austria. Tierra Nueva’s challenge today is finding more markets and one strategy is to deepen sales into the local market in Nicaragua. 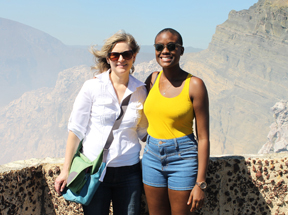 Our delegation is part of our World Fair Trade Day contest and with me are Olivia Morris and Wendy Silvuis, the winners from last year’s campaign. Olivia created an inspiring video on how she plans to bring back what she learned from going on a trip with Fair World Project to her community. Wendy is a high school teacher and implements fair trade curriculum into her AP geography courses. They are both showing much enthusiasm learning about the true intentions of fair trade and how we as consumers can play an active role in building a more just economy through supporting organized small-scale farming. As executive director of Fair World Project I am thrilled to participate in this journey with them to explore the ways we can be better citizens in this global economy and support organic small-scale farmers. Our next stop is Leon, where we will meet with founder and president of Maggie’s Organics, Bena Burda to visit their organic cotton farmers.

3 thoughts on “This is what authentic fair trade looks like: Visiting Tierra Nueva co-op in Nicaragua”