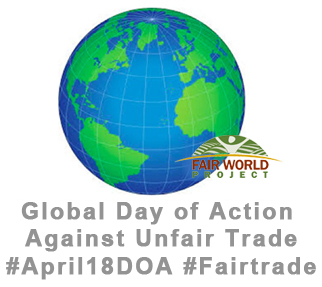 We’ve talked a lot about Fast Track over the last few years. Fast Track gives the President authority to negotiate and sign NAFTA-like “free” trade agreements without a full debate in Congress or constituent input. The two agreements in the pipeline are the Trans-Pacific Partnership (TPP), a massive trade agreement involving a dozen countries along the Pacific Rim collectively representing about 40% of global trade, and TTIP-the Transatlantic Trade and Investment Partnership, an agreement between the European Union and the United States with impacts far beyond those borders. NAFTA was a disaster for working families, small-scale farmers in all participating countries, and the environment, and these agreements are expected to be a repeat but on a much larger scale.

Because of the enormity of these agreements and their potential negative impact, there has been a tremendous amount of opposition to Fast Track in both the general public and within Congress. Previous attempts to introduce such legislation have been stalled. Yet Congress and lobbyist are gearing up to introduce Fast Track again.

But opponents are gearing up too. In November, Fair World Project participated in a week of action to Stop Fast Track and we facilitated sending 10,000 letters to Congress asking Senators and Representatives to oppose Fast Track. Combined with the thousands of letters facilitated by our allies, this sent a clear message to Congress.

Here’s how you can get involved.

Finally, help us spread the word by sharing this post and the action ideas and let’s hope the next day of action is a celebration of fair trade and not an opposition to unfair trade!