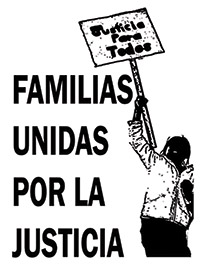 There are many problems plaguing the modern food system. With its reliance on chemical pesticides, practices leading to soil exhaustion, and the rampant exploitation of workers (particularly migrant workers), the U.S. industrial food system must be transformed into something more just, humane and sustainable. Dominated by the principle of private profit, and supported by all the coercive mechanisms of big capital, industrial agriculture is fundamentally organized around the commodification and exploitation of both land and people. In such situations, it is often the people who are working directly at the point of production who are in a position to wage truly transformative struggles right at the heart of the problem. The labor dispute at Sakuma Brothers berry farm in Burlington, WA shows just how powerful workers can be in driving movements for a fair and equitable economy.

The independent farmworker union Familias Unidas Por La Justicia (FUJ) formed out of a series of six strikes which began in July of 2013 at Sakuma Brothers, the largest berry farm in Washington’s Whatcom and Skagit counties, with over 1,500 acres of land, millions of dollars in annual revenue and customers like Häagen-Dazs and Driscoll’s. Every year, they hire hundreds of indigenous Triqui and Mixteco farmworkers from Oaxaca to pick their berries. For decades, the farmworkers have had to tolerate a wide range of abuses, including systematic wage theft (particularly from minors and women), racist and sexist abuse from supervisors, substandard housing, and continuous retaliation for their efforts to improve their working conditions.

Carmen Juarez Ventura, one of the farmworkers at Sakuma Brothers, described life on the farm in an interview with sociologist Seth Holmes: “One gains nothing here, nothing to survive. Besides that, I have a daughter here with me, and I don’t make anything to give her. Working and working. Nothing. … Sometimes [the checkers] steal pounds. Sometimes rotten berries make it into the bucket. ‘Eat that one!’ they say, throwing it into your face. … You don’t make enough even to eat. I have two children, and it is very ugly here, very ugly work in the field. That’s how it is.” 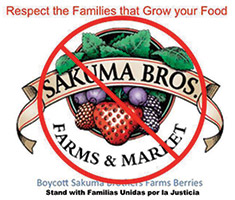 The first strike began when Sakuma Brothers fired farmworker Federico Lopez after he asked for a higher piece rate in July of 2013. “He had come all the way from California, so far away, and they wanted to fire him. The people then decided to support him,” explained Felimon Piñeda, who has been vice president of the union since the workers elected him in 2013. “They elected ten people to take the message … that if Federico was fired, then they had to fire all of us.” The company declined to fire them all. Felimon continued, “That’s when we started to organize our people.” The workers went on strike and issued a list of demands, including a collaborative piece rate-setting process involving workers and management, lunch and rest breaks per the law, overtime pay, an end to practices which violated federal and state laws against harassment, and respect for Triqui and Mixteco farmworkers (who were routinely called racist slurs and treated with disrespect), among other demands.

Initially, Sakuma Brothers negotiated an agreement which included a new piece rate-setting process, the reinstatement of Federico Lopez and the removal of a particularly abusive supervisor. However, after making this agreement, the company broke it by refusing to pay the new piece rate. The workers went back on strike and at that point called for a boycott of Sakuma Brothers products until the company resumed negotiations and signed a union contract with FUJ.

Since then, Sakuma Brothers has refused to meet with the union. During 2013, the farm used H-2A guest workers to break a strike, and they sent security guards to the fields and labor camps where the workers live, rather than meet with them. (A judge later ruled that sending guards to the workers’ homes violated state laws protecting their rights to organize.) In 2014, the farm applied for 463 guest workers under the H-2A program. They found ways to avoid hiring union members and local workers, even though the H-2A program is available only to employers who are experiencing a shortage of local labor, and it was clear there was a local workforce available. There is nothing in the H-2A program which allows an employer to use it simply to avoid hiring union workers, so the workers were able to alert the Department of Labor that Sakuma Brothers was deliberately using the program to displace the union, and the company’s application was ultimately declined.

The labor dispute and boycott continued through the entire 2014 growing season. While refusing to negotiate, Sakuma Brothers has spent untold thousands of dollars on PR firms and labor consultants to undermine the union. But the workers have received broad support; students and communities throughout Washington have organized committees to promote the boycott and have mobilized themselves to support FUJ as needed. Stores across the country have pulled the farm’s berries off the shelves — even the Häagen-Dazs store in Seattle pulled their strawberry ice cream, made with Sakuma Brothers berries.

The Washington State Central Labor Council has recognized FUJ as a union. In court, the farmworkers have won multiple victories over issues of workers’ rights, housing and hiring practices; they have won hundreds of thousands of dollars in back wages; and they have set many important legal precedents for future farmworker movements in Washington state. The efforts of FUJ to gain a contract have made tremendous strides in a very short period of time, but Sakuma Brothers continues to refuse negotiations and to retaliate against workers. The boycott remains in effect, and there is still much work to do before the company will negotiate a contract. Recently, they announced their intent to apply for H-2A guest workers in 2015, once again trying to abuse a government program to displace the union, rather than negotiating directly with organized domestic workers. So, FUJ’s struggle continues.

The principles of fair trade include fair prices and wages, workplace non-discrimination, gender equity, freedom of association, safe working conditions, reasonable work hours, environmental sustainability and transparency. The farmworkers of FUJ are organizing to bring exactly these principles to life in the U.S. food system, and they need all the support they can get. Movements such as this one have been incredibly successful in the past — including the Delano Grape strike and boycott under Cesar Chavez and the Chateau St. Michelle boycott, to name only two — but they have always needed the help of consumers to convince farmers to negotiate. “The most important way to provide support is to respect the boycott by not buying Sakuma Brothers or any product you know is made with their produce,” said Andrew Eckels, a student and activist who has been supporting the boycott. He added, “If there is already a boycott committee in your city, get in touch with them and ask about the best ways to get involved. If there is no committee in your city, then start one! Or at least organize pickets.”

Another important way to help is by donating money. FUJ’s struggle is a full union campaign embracing many fronts, and there are numerous expenses involved. The best way to contribute is by visiting their Web site (http://www.boycottsakumaberries.com/donate) or their Facebook page (https://www.facebook.com/FamiliasUnidas).

8 thoughts on “The Struggle for Fairness At Sakuma Brothers”