The Country of Original Labeling (COOL) law requires retailers to let consumers know where their beef, pork, and chicken was raised and slaughtered. As simple as this seems, it has become a center of controversy with big implications.

The House of Representatives, earlier this week, voted to repeal cool. (Fair World Project in the past has joined other organizations in asking Congress to protect COOL.) Senate will now have a chance to vote on the repeal of COOL. 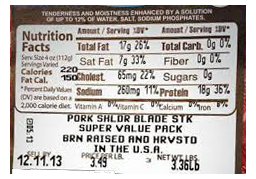 The reason Congress is even debating repealing COOL is to avoid trade sanctions. Canada and Mexico have argued that COOL favors domestic production and therefore is an unfair trade barrier and the World Trade Organization (WTO) agreed ruling in favor of Canada and the US. The US lost an appeal of the original ruling and now facing sanctions unless it is repealed.

If the Senate also votes to repeal, this will be a set-back for consumers, most of whom want more information about where their food comes from and how it is produced and will now be denied some of the most basic and simple information.

This also has big implications for the current debate about Fast Track and free trade agreements like the Trans Pacific Partnership. As Rep Rosa DeLauro (D-CT) stated, this situation clearly shows “trade agreements have a direct effect on our food sovereignty.”

If we care about food sovereignty, we need to change the rules of trade, not reinforce them with more of the same. Defeating Fast Track is essential not only for food sovereignty but also to protect us climate disaster, ensure decent jobs globally rather than fueling the race to the bottom, and to put medicine in the hands of people rather than profits in the hands of pharmaceutical companies. Labeling of meat may soon become the least of our problems.