At Dr. Bronner’s, the company I run with my family, we believe that we can only prosper in the long run if we contribute to the prosperity of society as a whole. It’s why we strive to compensate all our staff fairly, cap executive compensation at five times the lowest paid position, and dedicate profits to support and advance progressive causes.

This is also why we’ve joined the growing movement to raise the minimum wage. Dr. Bronner’s is on the Steering Committee of the DC for $15 campaign this cycle, and has pledged $500,000 to minimum wage battles around the country. We are excited to closely partner with The Fairness Project, which is bolstering state-based minimum wage ballot campaigns and driving a national narrative to elevate issues of economic fairness, as well as with Business for a Fair Minimum Wage, which has called for a federal increase in the minimum wage to at least $12 by 2020.

Together, we are coordinating with mission-aligned brands and retailers on a “Fair Pay Today” campaign this fall to raise awareness through special labeling, events and in-store messaging. We encourage all businesses to engage and be the “unusual allies” advocating an incremental and reasonable wage increase for hard-working Americans everywhere.

As my brother Mike Bronner, President of Dr. Bronner’s, says: “Investing in our workforce by ensuring every employee is paid a fair living wage has had a major positive impact on our company. Morale is high, turnover is low, and every employee gives a hundred and ten percent. Everyone who is working full time should receive a living wage, and be able to independently afford a basic standard for quality of life without relying on sub-par government support or second or third jobs.” 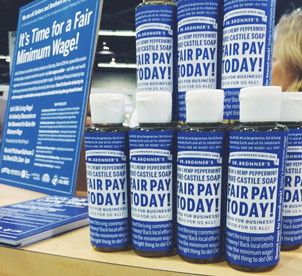 The fact is, volatile energy and food prices have much more routine cost impact on businesses and consumers than minimum wage increases. Consumers may pay a marginal amount more for certain goods and services, but the benefits of a fair wage floor far outweigh any needed pricing adjustments.

What type of workers are most affected? Doesn’t this just help teenagers?*
Most low-wage workers are adults. 89% of the workers who would be affected by raising the federal minimum wage to $12, for example, are at least 20 years old (Source: Economic Policy Institute).

But younger workers also deserve a higher minimum wage. Many workers younger than 20 are working to pay for necessities, afford higher education or are contributing to their family income. Everyone deserves a living wage.

What is the case for raising the minimum wage from the conservative standpoint?
Raising the minimum wage is about reducing inequality, but it is also about restoring the true value of work. Every American’s hard work should be rewarded. At Dr. Bronner’s, this has been one of the ideas at the heart of paying all our workers a fair wage.

To conclude, raising the minimum wage is good for business and good for us all. Paying workers fairly isn’t just the right thing to do, it’s what makes our communities and businesses thrive: happy employees mean lower turnover and higher productivity. Workers who make more spend more, putting money back into the economy, rather than being forced to rely on public assistance programs.

It’s past time to pay a fair share to the workers who make our collective wealth possible. We encourage all citizens and businesses to vote for a higher minimum wage at the ballot box this November. For more information, and to see how you can join the movement, visit: FairPayToday.org. Let’s raise the minimum wage now!

In our Spring 2016 issue, we asked you to weigh in on the question:
“What do you think the federal minimum wage should be and why?”

We received many passionate comments. Here are just a few of them:

“Of course it should be phased in gradually, but a firm target of $15 within a couple of years is a lot more reasonable than inching it up to $12 and then having to start the fight to raise it all over again.” Bonnie Jean, via Facebook

“Instead of a minimum wage, we need a proportional wage. The lowest paid employee must make at least, say, 5-10% of the highest paid (such as the CEO). This would help small businesses who are starting out, if they can get employees to work for small amount with the promise of making more as the business grows— and the big corporations would have to pay their employees well!” Debrah, via Facebook

“My husband and I own a small business on Long Island, NY. If we had to pay each of our workers a minimum wage of $15.00, we would have to close our store. That’s about the amount we make as owners of the business. I think a more realistic amount for a minimum hourly wage is between $10 and $12.” Claudia, via email

“I’m no expert, but I always thought they should go whole hog and demand $25/hour, with no incremental implementation.” Mike, via Twitter

“The minimum wage should depend on where you live. Here in the Bay Area, I would say it should be $30 an hour. In the middle of the country, I’ve heard it is much, much cheaper to live. So it needs to be regionally sensitive.” Laura, via email