Farmworkers at the Sakuma Brothers berry farm in Washington state have been in a years-long struggle for fair pay and rights protection with farm owners. Workers, under the banner of Familias Unidas por la Justicia (United Families for Justice) have been trying to obtain a legally binding contract that ensures a fair wage and decent working conditions.

Sakuma Brothers has refused to negotiate and not upheld promises, meanwhile attempting to underpay workers using a piece-rate system, allow basic abuses of rights on the field, and as attempted to bring in new workers through the H2A program when local workers started organizing. The situation is so bad that workers have called for a boycott of Sakuma Brothers berries. That is, they are asking buyers not to buy the very product that provides their livelihoods.

Driscoll’s is one of Sakuma’s main buyers. Driscoll’s is aware of the situation on Sakuma brother’s farms, but, despite a stated commitment to community and sustainability, workers report that Driscoll has actually increased purchases from Sakuma Brothers since the dispute began.

We are collecting signatures between now and March 9th when we will send a letter to Driscoll’s asking them to suspend their relationship with Sakuma Brothers until they negotiate a fair contract with farmworkers.

Sign the petition and tell Driscoll’s to stop purchasing from Sakuma Brother’s until they negotiate a fair contract with Familias Unidas por la Justicia!

A copy of the letter with all signatures will be delivered to the Driscoll CEO on March 9th, 2015.

We are deeply troubled by your partnership with Sakuma Brother’s Farm in Washington State. For several years Familias Unidas por la Justicia has been attempting to negotiate a fair and legally binding contract with Sakuma Brother’s that protects their basic rights and provides fair wages. Their situation is so dire they have been forced to call for a boycott and at the same time you have increased purchases from them.

The new growing season is coming up and we are writing to ask that you terminate your purchases from Sakuma Brothers until they in good faith negotiate a legally binding contract and Familias Unidas por la Justicia calls an end to the boycott. 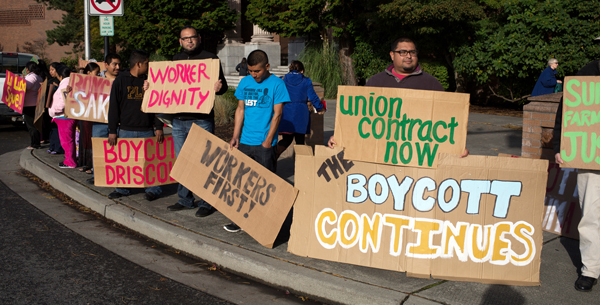