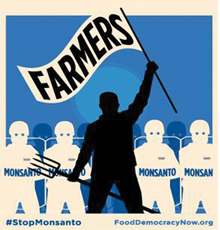 Stopping Monsanto is one of the most pressing issues of our time. As a single company, Monsanto is just the tip of the iceberg representing the threat that unchecked corporate power has in corrupting our democratic institutions, driving family farmers off the land, threatening human health and contaminating our environment.

The problem with Monsanto is not just their corrosive lobbying practices, but the fact that the products they produce, genetically engineered food crops made to resist high doses of the chemical weed killers they sell, are in more than 70% of the processed foods that we eat and feed our families every day.

In terms of corruption and consumption, Monsanto’s reach is global. Their toxic impact reaches far and wide, from farmers’ fields to our nation’s capital to leading universities to media editorial boards and even to the White House. Along the way, their patented genetically engineered pollen contaminates organic farmers’ fields, their poisonous chemicals infiltrate our waterways and our food, and their lobbying tactics undermine our basic rights.

After more than 100 years in business, Monsanto’s name has become synonymous with greed, arrogance, corruption and poison. In a stunning display of calculated callousness1 towards the impact that their products have on human health and the planet, Monsanto is responsible for some of the most lethal chemicals known to history, including Agent Orange,2 PCBs and DDT.3

In the 1980s, Monsanto made a strategic decision to combine their chemical company with the emerging science of biotechnology. Today, the same company that poisoned America’s veterans in Vietnam4 is responsible for producing the food that appears on our plates every day.

If you think that the same company who lied about the health impacts of Agent Orange to the U.S. government and our veterans is telling you the truth about the science behind genetic engineering and the food they are feeding us, then you are either uniformed, delusional or perhaps a member of Congress.

This past spring, Monsanto made the single largest strategic error in their 100-year history when they finally succeeded in sneaking a special corporate loophole protecting their genetically engineered crops from judicial review into a must-pass spending bill.

By successfully pushing for Section 735, now known as the infamous “Monsanto Protection Act,”5 Monsanto finally exposed the truth to millions of outraged citizens about how they operate as a lawless corporation, willing to manipulate our nation’s laws to protect their flawed GMO technology and able to get away with it because our elected officials at the highest levels have become accomplices in the ultimate corruption of our nation’s laws.

Now that Congress and the President have shown their true colors to the American people and free citizens around the world, it is our civic duty to expose and resist this descent into lawless tyranny that not only keeps the American people from having the basic right to know what’s in our food, but also prevents open and independent scientific studies from being conducted on patented GMO crops.

The fight over the “Monsanto Protection Act” has become the turning point6 in the debate on political lobbying and genetic engineering in the U.S. For the past twenty years, Monsanto has been able to get their laws written behind closed doors while no one was watching. Today, however, we’ve built a movement that is paying close attention to every lie they tell the media and our elected officials, watching for every time they try to corrupt our democracy.

At Food Democracy Now! we are greatly encouraged that activists and everyday citizens around the world are waking up to the toxic impact that corporations like Monsanto have on our planet and are willing to join the growing movement to take back our basic democratic rights.

For far too long, Monsanto has been allowed to operate under the cover of darkness, manipulating our elected officials, the media and scientific institutions, who would normally all serve as safeguards against their deeply flawed technology. Their unchecked power is corrosive to the health of our democracy, our well-being and our planet, and it must be stopped. As free citizens, it is our right and our duty to protest their unlawful encroachment into the most basic and fundamental aspects of our lives, the food that we eat and the laws that govern us.

What elected officials and Monsanto apologists need to know is that we will no longer be silent. Monsanto’s days are numbered, and the era of telling lies and getting away with it is over. Monsanto and our elected officials have one choice now: label GMOs in the U.S., or they will go the way of the dinosaur.

Thank you, Monsanto. Your corruption has become your own undoing.