In December, Nestle announced plans to build a massive $154-million-dollar coffee processing plant in the Mexican state of Veracruz. The plant would process Robusta coffee, a variety of coffee that commonly goes into instant coffee and cheaper blends (think Nescafe, for example). Much of the world’s supply of Robusta is grown in Brazil and Vietnam at lower elevations than the high mountain Arabica coffee that dominates Mexico’s coffee industry.  To support this plant, Nestle is asking the government to subsidize the planting of 80,000 hectares of Robusta, a volume that would make Mexico rival Brazil in coffee production.

Such an investment would dramatically change the face of Mexico’s coffee industry. For many years, Mexico was one of the top producers of organic and fair trade coffee and still the coffee industry there is dominated by small-scale coffee farmers whose families tend small diverse plots of land in the mountains. Robusta variety coffee, by contrast, is generally farmed on in large plantations where full sun and monoculture plantings mean heavy chemical fertilizer use. 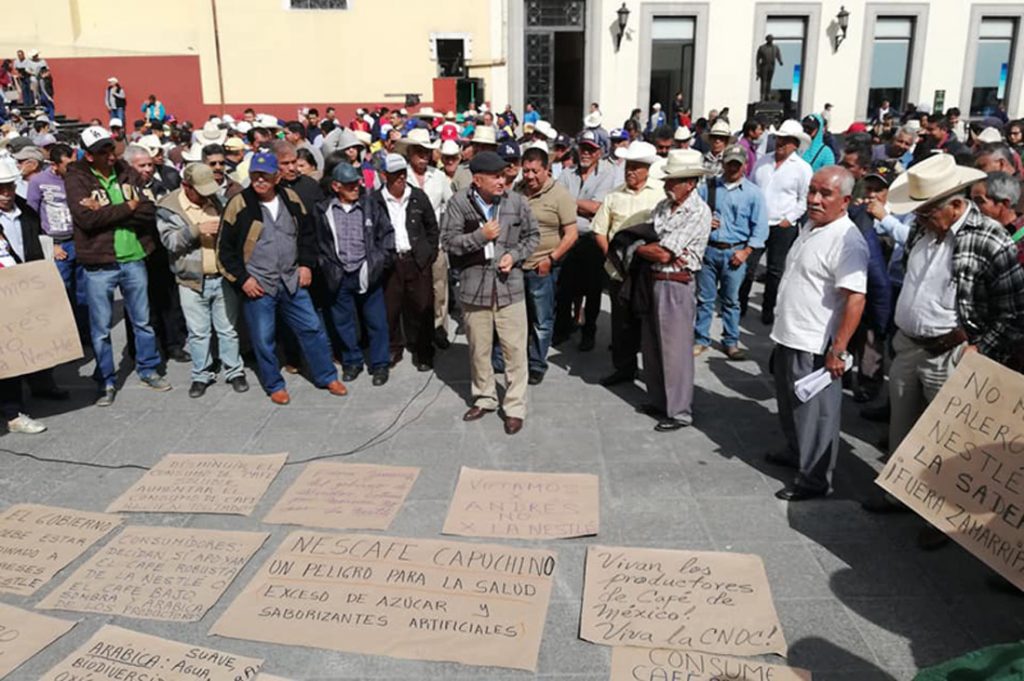 This proposal comes at a particularly bad time for coffee farmers around the globe. While Nestle reported $7.3 billion dollars in profit last year, coffee farmers are seeing prices hit historic lows, hovering around $1/pound on the commodity market for much of 2018. These low prices come as many farmers are already struggling with the impacts of climate change. Irregular weather patterns mean increased drought and unseasonable rain washing away hillsides or damaging blossoms, and making plants more susceptible to fungal diseases like la roya. All these pressures drive down yields and quality—and these pressures have been building over the past half-decade or more.

In Mexico, coffee farmers are facing all these challenges, and some additional ones too. While their new president, Andres Manuel Lopez-Obrador (often shortened to AMLO) was elected in part on a platform of standing up for small-scale farmers and rural people and speaking out against neoliberalism, so far his administration has not followed through. Instead, the latest budget slashes funding for the coffee sector, support that is vital for a sector that’s largely made up of small-scale, often indigenous farmers.

Pulling support from small-scale farmers and funneling it to corporate interests is a pattern that is, unfortunately, far too familiar. And the complaints that coffee producers raised as they took to the streets in Veracruz sound familiar as well.

While government officials promote the coffee processing plant as a potential source of jobs and growth for the region, farmer groups are skeptical. Nestle’s press release promises 250 new jobs and the potential to create up to 1200 jobs in the region. Yet this sort of investment only serves to further concentrate wealth and vertical integration in an industry that continues to consolidate.  According to the 2018 Coffee Barometer study, “Only 10% of the aggregate wealth of coffee stays in the producing countries,” and this extraction of wealth is noted as an obstacle to a sustainable coffee sector as well as economic development for coffee producers.

Invest in Agroforestry Not Industrial Farming

The Coordinadora Nacional de Organizaciones Cafetaleras (CNOC), the National Coalition of Coffee Organizations, has expressed concern that this will drive prices down for coffee farmers and push the market further towards low-quality instant coffee. Instead, they argue, the government should be supporting the growth of domestic coffee markets, allowing Mexican farmers to keep more of the value of their crop in the country.

Channeling this investment to Nestle is supporting the wrong kind of farming. An expansion of Robusta coffee planting has the potential to drive land grabs to build the massive plantations needed, fueling deforestation and squeezing out small-scale diverse farmers. There’s plenty of evidence that coffee farms, when planted with a diversity of trees and well-managed, can help sequester carbon and combat climate change. But that’s likely not what Nestle has in mind as such diverse agroforestry systems tend to require more investment of time and labor and yield diverse crops not the industrial stream of a single ingredient that they require.

No to Nestle, No to More Corporate Coffee

In a letter to the President and the Secretary of Agriculture and Rural Development, members of CNOC make a series of demands to make this proposal a better deal for small-scale coffee producers—and everyone aside from the very few who stand to benefit from making Nestles more money:

Let President AMLO know that the international community of coffee drinkers is concerned about small-scale farmers—sign the petition today.

Who Profits from Your Coffee?

Deals like this offer a concrete reminder of why we highlight the importance of knowing who owns the company you’re buying coffee from. While the marketing materials of some of Nestle’s more premium brands like Blue Bottle Coffee or Chameleon Cold Brew may highlight their farmer partners and sustainability initiatives, their parent company is investing far more resources in projects that are bad for coffee producers and the planet. (And this project is just one of many—Nestle routinely comes in near the top of lists of corporate abusers for human and labor rights, water rights, and environmental issues).

If you’re looking to support small-scale coffee farmers, our list of mission-driven brands collects companies who are committed to working ethically throughout all their supply chains. Companies like Equal Exchange have been committed to working with small-scale farmers for more than three decades and others like Higher Grounds Coffee, Just Coffee, and Peace Coffee grew out of solidarity projects with Mexican coffee farmers.

Small-scale farmers around the world struggle to earn a livelihood. Meanwhile, multinational corporations like Nestle rake in the profits (in their case, $7.3 billion dollars per year). Show your support for small-scale farmers and against yet another project to make the second biggest food company a little bigger

Take Action: Show Your Support and Sign the Petition