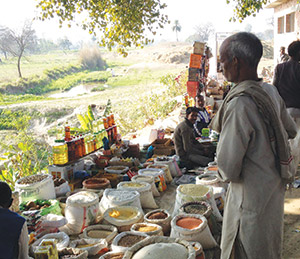 What follows is an excerpt from a longer open letter by Dr. Vandana Shiva to heads of state in both India and the U.S. outlining her case for seed sovereignty. The letter was written on the eve of a proposed agreement between the two countries that would threaten the rights of farmers to save seeds. It covers flaws in the logic behind countries offering seed patents, introduces the unequivocal concept that life is not an invention, and reviews several examples of companies attempting to claim and patent nature as their own invention. In many instances, civil society has fought back and won these “biopiracy” cases, but this open letter is a call for an end to the regulatory environment that allows patent applications and biopiracy in the first place, and for changes to restore the time-honored rights of farmers and home gardeners to save their seeds.

LIFE IS NOT AN INVENTION
BIOPIRACY IS NOT “INNOVATION”

Biopiracy is another example of false claims to “inventions.” Over the past decade, through new property rights, corporations have gained control over the diversity of life on earth and people’s indigenous knowledge. There is no innovation involved in these cases; they are instruments of monopoly control over life itself. Patents on living resources and indigenous knowledge are an enclosure of the biological and intellectual commons. Life forms have been redefined as “manufacture,” and “machines,” robbing life of its integrity and self-organization. Traditional knowledge is being pirated and patented, unleashing a new epidemic of biopiracy.

Corporations like Monsanto have taken 1,500 patents on climate-resilient crops. The climate resiliency traits will become increasingly important in times of climate instability. Along coastal areas, farmers have evolved flood-tolerant and salt-tolerant varieties of rice, such as “Bhundi,” “Kalambank,” “Lunabakada,” “Sankarchin,” “Nalidhulia,” “Ravana,” “Seulapuni” and “Dhosarakhuda.” Crops such as millets have been evolved for drought tolerance and provide food security in water-scarce regions and during water-scarce years.

To end this new epidemic and save the sovereignty rights of our farmers and citizens, it is required that our legal systems recognize the rights of communities, including their collective and cumulative innovation in breeding diversity, and not merely the rights of corporations. It is the need of the hour to evolve categories of community intellectual rights (CIRs) related to biodiversity to balance and set limits along with boundary conditions for protection. The intellectual property rights as evolved are, in effect, a denial of the collective innovation of our people and the seed sovereignty or seed rights of our farmers …

To join Vandana Shiva and democratic, concerned citizens of India and the U.S. in signing an open letter to Prime Minister Modi and President Obama, visit www.fairworldproject.org/sf.

To view the letter in its entirety and sign on, go to
https://fairworldproject.org/?p=6390