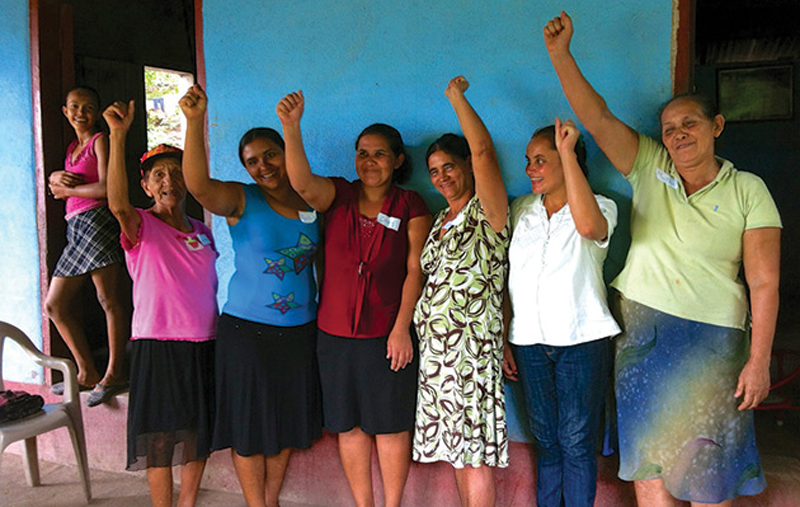 Nicaragua’s revolution triumphed on July 19, 1979. The Sandinistas came to power, having overthrown the Somoza dictatorship. The revolution won the hearts of the vast majority of Nicaraguans and caught the imagination of the world. In the initial years, there were huge and rapid advances in education and health and, importantly, extensive and successful land reform where valuable lands were given to campesinos organized into cooperatives.

In response to this novel and exciting revolutionary model in Central America, the newly elected U.S. government, presided over by Ronald Reagan, financed the contra war and imposed an economic blockade on Nicaragua.

Spontaneously, an international movement in solidarity with the Nicaraguan people developed. Thousands of volunteers headed to Nicaragua to build schools and houses and to pick coffee, often in communities in the war zone. Many successful expressions of fair trade can be traced to these humble beginnings where Europeans and North Americans made a tangible and effective stand against the U.S. blockade by purchasing bananas and coffee at fair prices in solidarity with the Nicaraguan people and their revolution.

I arrived in Nicaragua in 1988, as a nineteen-year-old volunteer, to live and work with campesinos in rural Achuapa, an isolated northern village. Our objective was solidarity, and we helped to build houses in land reform cooperatives that had been devastated by the contra attacks. Driven by the need to find creative solutions to the poverty the war had left behind, I soon found myself working with the campesinos to get better prices for their beans and corn, and starting a small store (Tienda Campesina) to provide access to basic goods at reasonable prices. I joined together with local farmers to found a cooperative that was later renamed “Cooperativa Multisectorial Juan Francisco Paz Silva.” The cooperative was already well-established when sesame prices plummeted in 1991. That year, I happened to be at home, so I contacted the cosmetics company “The Body Shop” which was just starting its Trade Not Aid department. They were willing to take a chance and buy sesame oil to support our cooperative initiative, and we ended up establishing the norms for the first community/fair trade sesame in the world. Building on our successes, we formed a second-level cooperative called “Del Campo R.L.” with other sesame cooperatives in the region.

Del Campo soon became the largest exporter of sesame in Nicaragua, selling to conventional markets, as well as the fair trade and organic markets we had previously established. We were not the only ones proving this viable model; all over the country, farmer cooperatives were building similar second-level cooperatives to process and sell their coffee, honey and dairy.

The initial idea came from a Californian coffee roaster, Paul Katzeff, who had also first visited Nicaragua in the 1980s. We soon discovered that we shared a love for the Nicaraguan revolution. He had just become the president of the Specialty Coffee Association of America and was visiting during the aftermath of Hurricane Mitch. His great insight, based on a lifetime of roasting coffee, was that the key missing link in the coffee supply chain was cupping laboratories for the small-scale farmers. Farmers needed to taste their own production to understand the quality they had to strive for. The laboratories would also be the perfect environments for farmers to meet with specialty roasters and sell them single-origin unique coffees at a high value.

We worked as a team with the empowered second-level cooperative leaders. Paul had secured the financing, and we set out to build nine beautiful cupping laboratories throughout the coffee-producing regions of Nicaragua. We trained the farmers’ family members to become cuppers, and very soon we had coffee tasters to match the best. When finished, the cupping labs were so beautiful and successful that in the first year twenty-seven containers of single-origin small-scale farmer cooperative coffee, mostly fair trade, were sold — along with wonderful stories — into the U.S. marketplace.

The idea spread fast throughout the specialty coffee industry. The norm was established that farmers should know the flavor profile of their coffees, and that coffee roasters should have long-term relationships with the very communities who produce the coffee they purchase. We succeeded in making the way coffee was traded fairer and more horizontal, while achieving added value for all due to the higher quality coffees that could be produced. The cupping labs indeed proved to be the perfect place for coffee roasters to relate to the small-scale farmers and discover the coffees they loved. The whole process brought much enjoyment and success in the spirit of the best principles of fair trade.

My belief is that this incredible achievement happened through people coming together from throughout the supply chain and working as a team. I also believe that the trust and shared vision that was established through the development of fair trade was the environment in which we thrived. On reflection, what was so exciting was that fair traders were spontaneously achieving equally innovative developments all over the world. Small-scale farmers and their families were benefitting, and the cooperatives were now impressive established businesses, often the largest in their communities. In the Global North, successful brands were established, and Alternative Trading Organizations (ATOs) became a buzzword for many people from the commercial sector who made life-changing decisions to switch and work for fair trade companies.

We had successfully created a new trading system based on ethics, dreams and trust. We were part of a global social movement.

As we should have expected, there were pains to success, and the reaction from the large traditional companies was quick in coming. After ridiculing fair trade from its inception, they suddenly wanted in. For those of us who had always been in fair trade for social change and revolution, it felt like betrayal. Despite considerable resistance, profound heart-searching and debate, larger companies and transnationals were included and authorized to sell fair trade-certified products.

The fair trade movement is no longer a united force, but in my opinion the incredible power of collaboration and cooperation is as true today as ever. We need to consciously build collaborations that span the entire supply chain. We should value and cherish the shared vision and trust that is possible. We should celebrate diversity and innovation and enjoy the positive unexpected results that often occur.

I am personally passionate about the principle of farmers moving up the supply chain and consumers moving down, creating transparent dealings based on the values of sustainability and fairness.
Our latest initiative is a company called Ético: The Ethical Trading Company. It is an extension of the small-scale farmer cooperatives, who are founder-shareholders. The principle is that 100% of company shares are owned by non-profits and cooperatives, which is a deliberate design to stave off the raw profit motive. Ético is currently striving for radical and exciting sustainable innovations in coffee and sesame. In both markets, we have teamed up with stakeholders who span the supply chain:  farmers, their first- and second-level cooperatives, ATOs, family-owned companies, ethical investors and non-profits. Trust and shared vision have been achieved, with all playing specific roles in a collaborative fashion.

In addition to being an opportunity for farmer cooperatives to be shareholders in the company that imports their products into Europe and the U.S., this new model facilitates a deeper level of collaboration between stakeholders within the supply chain.

One clear example of this is the Recognition of the Unpaid Work of Women Cooperative, pioneered by the Juan Francisco Paz Silva Cooperative, Ético and The Body Shop. In 2008, the cooperative proposed including the value of the unpaid work that rural women do to support family-based agriculture into the price structure of their sesame. The value was agreed upon after an initial time-use study, and the cooperative has used the funds collected to invest in a women’s empowerment initiative that is open to women from the whole municipality. Four years later, there are eighty women organized into groups, and they are successfully managing individual and group businesses, attending classes and participating in cooperative events. Two years after the initiative was founded, more women than men applied to become full members of the cooperative — for the first time in the cooperative’s history. A recent evaluation showed that 95% of the women surveyed feel that this initiative will help them reach their personal goals and has succeeded in publicly recognizing the value of women’s traditional work. The generous, open methodology of this initiative, and the trust and empowerment it grants to women in the community, flows from the trust and empowerment achieved between the Juan Francisco Paz Silva Cooperative, Ético, The Body Shop and other stakeholders throughout the development of their fair trade sesame relationships.

Our movement is at its best when we make the effort to come together across the supply chain to work towards common goals. Our successes result in ever-greater empowerment for all stakeholders, but most importantly our model empowers the small-scale farmers, their communities and their cooperatives, by giving them a dignified and protagonist place in global trade and the world economy. Our strength is our commitment to sustainability, equality and justice.

The time has come for us to rediscover the roots of fair trade: revolution.

2 thoughts on “Roots in Revolution”