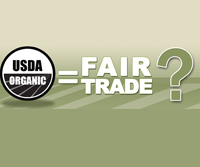 If you can remember back to the early days of organic agriculture in the 1970s, you may recall its history as a movement with a holistic approach to land and livelihood. The farmers who were attracted to organic practices and their loyal customers agreed that decent prices, fair treatment of workers and animals and care for Mother Earth all went together. Organic food enthusiasts were willing to pay a small premium for organic products to sustain the farms economically. They understood that the prices had to cover the true costs of production, and they trusted their farmers to charge fair prices. That all started to change as larger entities became involved and organic products began to enter the mainstream marketplace. The initial family-scale farms and small, independent processors faced overwhelming competition from an “organic industry” and large-scale farms that converted to organic purely as a marketing decision. The “American Organic Standards” developed by the Organic Trade Association (OTA) did not touch pricing or labor issues, and then the Organic Foods Production Act of 1990, which established the National Organic Program (NOP) under the USDA, followed suit. When commentators criticized the NOP for leaving out the social component, they responded that it was “not in our purview.”

This departure from the original principles of organic agriculture inspired the creation of what evolved into the Agricultural Justice Project (AJP). Michael Sligh of Rural Advancement Foundation International (RAFI-USA), Richard Mandelbaum of the Farmworker Support Committee (CATA), Marty Mesh of Florida Organic Growers (FOG) and I decided to “go beyond” the NOP definition of organic as a marketing label and develop standards for the fair and just treatment of the people who work in organic and sustainable agriculture. As a small-scale organic farmer, I feel strongly that it is not enough to treat earthworms with respect. For our farms to thrive, we need prices that cover our costs of production, including living wages for ourselves and everyone who works on our farms, plus a surplus to invest in the farm’s future. We need to make agricultural work a respected career with appropriate benefits.

The social justice thrust of AJP has deep roots in the movement for organic agriculture. Sometime in the 1980s, the Northeast Organic Farming Association (NOFA) endorsed the following principles that can be found in our program manual to this day:

The early versions of the principles of the International Federation of Organic Agriculture Movements (IFOAM), whose standards formed the basis for most of the organic standards around the world, included these comprehensive statements on social justice (from IFOAM Basic Standards list of Principle Aims):

The most recent version of IFOAM’s Principle of Fairness is even more explicit:

“Organic agriculture should build on relationships that ensure fairness with regard to the common environment and life opportunities. Fairness is characterized by equity, respect, justice and stewardship of the shared world, both among people and in their relations to other living beings.

This principle emphasizes that those involved in organic agriculture should conduct human relationships in a manner that ensures fairness at all levels and to all parties – farmers, workers, processors, distributors, traders and consumers. Organic agriculture should provide everyone involved with a good quality of life and contribute to food sovereignty and reduction of poverty. It aims to produce a sufficient supply of good quality food and other products. This principle insists that animals should be provided with the conditions and opportunities of life that accord with their physiology, natural behavior and well-being.

Natural and environmental resources that are used for production and consumption should be managed in a way that is socially and ecologically just and should be held in trust for future generations. Fairness requires systems of production, distribution and trade that are open and equitable and account for real environmental and social costs.” (IFOAM Principles 2005)

Bringing Fair Trade Home
Since 1999, AJP has been at work elaborating upon these principles. The success of international fair trade, with the steady climb in numbers of people willing to spend a little more money to support family farms in developing countries, has provided an encouraging model. The AJP standards were developed over four years of meetings with workers, small-scale farmers, fair trade companies and organizations, indigenous peoples, consumers and organic certifiers. Hundreds of people from over sixty countries participated. The standards address the following issues:

In August of 2010, AJP posted a revised and expanded version of these standards on our Web site (see http://www.agriculturaljusticeproject.org). Four years of pilot projects, where we tested the draft standards against the reality of actual farms and food businesses, followed by two years of experience with social justice certifying, shaped the revisions. During this time, AJP has also developed the policies that will govern our program, training modules for certifiers and auditors and materials to help farms and businesses comply with our standards.

In response to the rapidly growing market for socially responsible goods, the AJP steering committee joined with others to found the Domestic Fair Trade Association (DFTA) in 2007. The purpose of the DFTA is to organize food system stakeholders around the issue of justice in North America. It is a collaboration between farmers, farmworkers, food retailers, processors and distributors, non-profits and civil society organizations to bring the principles of international fair trade to bear on the challenges of local and regional food production at home.

The urgency of reuniting the principles of fairness and organic is underlined in the concluding report of the National Organic Action Plan, “From the Margins to the Mainstream – Advancing Organic Agriculture in the U.S.” (January, 2010). As Lynn Coody summarized in The Organic Standard June, 2010 issue, “At their beginning, organic regulations set a high bar for advancing cultural and social values in agricultural production. It is proposed that this foundation be restored by re-dedicating organic practice to an ethical food and agriculture system that honors the values of fairness and basic rights. Fairness includes fair trade, fair pricing (and contracts), fair access to land (and credit) and fair access to quality, organic food and seeds. These basic rights also encompass the rights of all people to follow their own cultural and traditional knowledge systems and the rights of farmers and farmworkers to have an empowered voice in the continued improvement of an ethical food system. This should apply directly to both domestic and foreign agricultural policies with the recognition of organic agriculture’s contributions to local food security and the alleviation of hunger both nationally and internationally.”