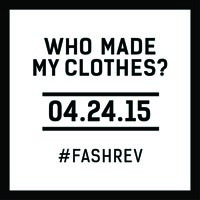 April 24th is the two year anniversary of the Rana Plaza disaster in Bangladesh in which over 1,000 people were killed in the collapse of a garment factory.

Victims of the disaster and their families still have not been fully compensated and, despite public outrage, the industry is still in need of transformation.

Some of the first steps in this transformation are accountability and transparency. As a coalition that calls itself the Fashion Revolution explains, “By asking consumers, designers, brands, and all those who care to ask a simple question, ‘Who made my clothes?’ we envisage a change in perspective that will lead to a deeper understanding.”

This year on April 24th join the Global Day of Action and call for a fashion revolution. Here are some ways you can get involved:

Together we can create an economy in which fashion does not mean exploitation!