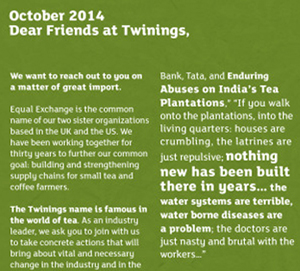 A joint investigation between Radio 4’s File and BBC News recently uncovered inhumane conditions on tea plantations in Assam, India. Crumbling housing and unhygienic conditions, child working in the fields, workers spraying pesticides without any protective equipment, and children unable to break cycles of disease and malnutrition were some of the concerns raised in the investigation. To make matters worse, all of the estates visited as part of the investigation had received the Rainforest Alliance seal of approval.

Rainforest Alliance has responded to the investigation, essentially reiterating that their standards and processes do not allow for these conditions and they are investigating on their own in addition to continually improving their own standards. Separately, Rainforest Alliance director Edward Miller told BBC, “Clearly an auditing process, because it rests on an annual inspection, is not going to be perfect.”

This is not the first time certified tea plantations in India have been called out. It was just about a year ago that fair trade pioneer Equal Exchange called upon Twinings and other major tea brands to stop marketing any tea from plantations in India fair trade due to the prevalence of the very conditions described in the more recent investigation.

Sarah Besky, who lived, worked, and researched on tea plantations in Darjeeling went so far as to say that fair trade certification undermined government regulations and attempts to improve laws and enforcement that would benefit all workers.

Rainforest Alliance should be commended for admitting that a once-a-year audit is not perfect and for taking these allegations seriously. However, nowhere in their response do they consider that maybe, as researchers like Besky, committed brands, like Equal Exchange, and activists like Stephen Ekka, a local activist quoted in the BBC story, have been saying certification in the context of Indian tea plantations is not the right tool for the job of empowering workers. Supporting the transition to small-scale tea co-ops (as Equal Exchange is doing) and supporting worker-led initiatives (as examples improving the Plantation Labor Act or forming unions or other worker associations) are more effective in this context. 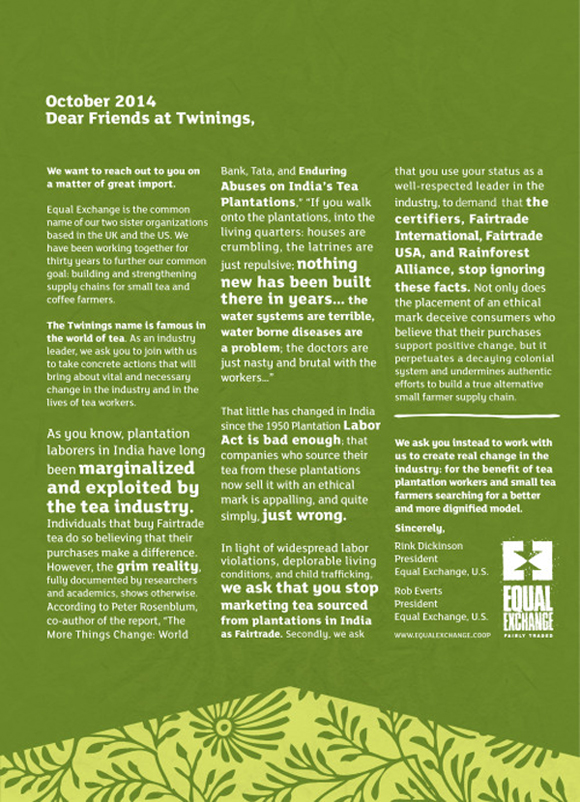