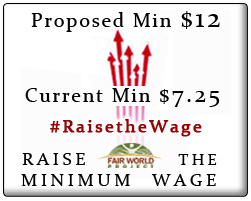 Momentum to raise the minimum wage for low-wage workers, many of them in the food sector, has been gaining in recent years. Fast Food workers in particular have been at the forefront of the fight, demanding $15/hour as fair compensation for the work they do.

It is not just workers themselves who support increased wages. Research has shown that employee turnover is lower when wages increase, therefore reducing training costs. Increasing wages also gives more purchasing power to consumers, increasing revenue for retail and food businesses in the low-wage sector. Because increasing wages is good for businesses, over 1,000 businesses, both large and small, have signed onto a Businesses for a Fair Minimum Wage statement.

Federal legislation introduced in 2012 (the Fair Minimum Wage Act) stalled in Congress in 2014. During those years, there were a number of successful fights to raise wages at the local and state levels, though only Seattle and San Francisco to date have passed bills to raise wages to the $15/hour level.

This bill is also more ambitious than the announcements made by large corporations like Walmart and McDonalds that say they will increase minimum wages for their own employees to $10/hour, which is still a poverty wage for most workers.

It would also increase base wages for tipped workers. The current federal minimum for tipped workers is $2.13/hour and tipped workers are especially vulnerable to unpredictable and low wages. Some restaurants are already experimenting with eliminating tips and opting instead to pay all workers a steady and fair wage.

Recent reports by the Economic Policy Institute and National Employment Law Project have shown that most minimum wage workers are adults, not teenagers as often imagined, many have at least some college education, and women and minorities are overrepresented in the low-wage workforce.

Take Action: Let your Senators and Representative know that you want them to support the Raise the Wage Act