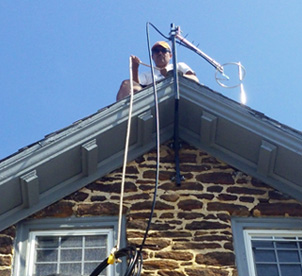 A Radio Station to Empower the Latino Community
By Meghan Hurley


In November of 2015, CATA, The Farmworkers Support Committee, officially launched Radio CATA, its own Spanish language non-commercial low-power FM radio station in Bridgeton, New Jersey. The radio station began as a way to reach out to the immigrant community and engage them in CATA’s mission of organizing to fight for the rights they deserve. CATA members see the radio station as a crucial communication tool to build unity among Latinos as they struggle for justice in their workplaces and communities.

CATA members worked hard for more than a year, planning and fundraising to get the station up and running this past November.  They participated in all aspects of the station construction, from soldering the cables to climbing the roof to install the antenna. The station plays on 102.5 FM in Bridgeton and is streaming online for the rest of the world to hear at www.radiocata.com.

Through the radio station, CATA provides news reports and information on issues concerning the migrant community— immigration, workers’ rights, food justice—as well as local community announcements of CATA’s meetings, trainings, workshops, and other activities. A space has been created to talk about questions and concerns that members have in their workplaces and communities. There is also music, live programming, a weekly hour-long program on current events and situations facing the community.

Since its first broadcast, Radio CATA has grown into a place of entertainment, education, and empowerment for its listeners.

CATA Mission: CATA, The Farmworker Support Committee, is a non-profit, member-based organization governed by and comprised of farmworkers and migrant workers who are actively engaged in the struggle for better working and living conditions. CATA’s mission is to empower and educate its members through leadership development and capacity building. Projects and campaigns are undertaken with the goal of achieving meaningful and lasting improvements, rather than mere reforms to a legal and economic system that is structurally biased against them. CATA currently works with the Latino migrant community in New Jersey, Pennsylvania, Delaware, and Maryland.