What do bees and butterflies have in common? 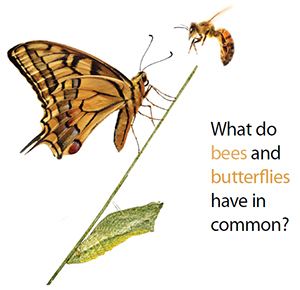 More than you would think; they are the “canaries in the coal mine” of an industrial food system that is out of control.  Their dwindling populations speak to the failures of a system heavily dependent upon genetically engineered (GE) seeds and chemical inputs that do not ultimately serve farmers, consumers or the vital pollinators we rely on for our food.

Since the 1940s, pesticide use (be they herbicides, insecticides, fungicides or something else) has increased dramatically, as a handful of pesticide corporations have grown and consolidated, swallowing up seed companies in the process.  And those on the front lines of exposure — pollinators and people — are showing just how harmful this heavily industrialized food and farming system can be.

Farmers who have adopted these chemicals got caught on a “pesticide treadmill,” forced to use more and more hazardous chemicals to control insects and weeds that developed resistance to previous chemicals.  The introduction of GE crops, designed to survive high doses of the pesticides that chemical companies sell, has supercharged this dynamic.  As “superbugs” and “superweeds” have developed, farmers have been forced to use more pesticides just to maintain crop losses at the same rates — thus stuck in high gear on the treadmill.  Today, more than sixty-one million acres of farmland are infested with weeds resistant to Monsanto’s Roundup, the most widely used GE seed and herbicide combination.

Farmers are now largely beholden to six pesticide corporations — the “Big Six,” including BASF, Bayer, Dow, DuPont Pioneer, Monsanto and Syngenta — for most of their seed and chemical inputs.  Since the 1990s, the Big Six have gone on a buying spree, gobbling up genetic engineering technologies, in addition to ever-increasing percentages of the pesticide and seed markets.  These corporations now control 76% of the global pesticide market and 60% of the global seed market.  And, increasingly, they are cross-licensing GE seeds and pesticides in order to maintain market control.

Evidence of this industry consolidation could not be more clear.  As resistance to Roundup continues to grow, farmers are scrambling to find a replacement, and companies are scrambling to sell them one — but there are no adequate solutions currently available on the market.

GE crops designed to withstand more and more pesticide use are the corporations’ perfect vehicle to boost their bottom lines, even if they are not long-term solutions for our food system.  And while Roundup-ready crops are proving to lead to unintended consequences, like massive increases in the use of Roundup and the creation of superweeds, these corporations are poised to bring more of the same flawed GE seeds into the market.

Dow, for instance, is promoting its 2,4-D-resistant seeds as the next generation “solution” with its Enlist products.  While these crops are still pending USDA approval, the agency has signaled that it will likely allow them into the marketplace.  Bad news.  2,4-D is an antiquated and drift-prone pesticide that is linked to cancer and reproductive harm — and children are especially susceptible to it.  Not only that, but it also poses significant harm to any other broadleaf crop nearby, since it can drift and damage those crops, threatening neighboring farmers’ livelihoods.

Margot McMillen, a farmer and leader with the Missouri Rural Crisis Center and National Family Farm Coalition, described the damage that she experienced with her grapes from 2,4-D drift this way: “When we first noticed the damage — the strangely cupped leaves, then the withering and the leaves that look like onion skin — I went into denial.”  As with Roundup, over-spraying 2,4-D will create resistant weeds in a short period of time, but not before Dow has made billions of dollars poisoning our food, water and bodies in the process.

A System Out of Balance

The impacts of the explosive growth of GE crops and pesticide use are evident, as populations of monarch butterflies are disappearing from across the American Midwest.  In the early 1990s, one billion monarch butterflies made the pilgrimage from the U.S. Great Plains to Mexico.  Now, only thirty-three million — less than 4% — are making that migration.  The growth in vast monocultures of pesticide-tolerant corn and soy has meant the destruction of milkweed, the butterflies’ traditional feeding source as they migrate across the country; there is simply not enough food now to support them.

Declining bee populations are also a symptom of a system out of balance, propelling the food system into even greater trouble. In 2006, beekeepers began reporting unprecedented, large die-offs of bees, and each year since, they have lost on average one-third of their bees. Not only are these vital pollinators responsible for one in three bites of food we eat, but the estimated value of their pollination services in the U.S. farm economy is $19 billion.

Bee population losses are linked to a new type of “systemic pesticide” that now coats the seeds of a majority of U.S. commodity crops, including most of our corn and much of our soy and cotton. Systemic pesticides are absorbed through a plant’s vascular system and expressed through every plant part possible — including in the pollen and nectar where bees encounter them. On top of the problems caused by disease and the lack of healthy food sources (similar to butterflies), bees are also dying from both outright pesticide exposure and from consistent, low-dose exposure which compromises their immune systems — the straw that breaks their backs.

Our food system also relies heavily on a labor force of talented farmworkers for harvest. The continued use of pesticides in specialty agriculture ensures that these workers are being routinely exposed to harmful chemicals. Workers encounter pesticides all over the place: in the fields where they work, often near their homes and communities, in the air they breathe and the water they drink, on the food they eat, and on their clothes and shoes.

The widespread use of antiquated insecticides like chlorpyrifos is increasingly linked to impacts on worker health and learning disabilities, and these chemicals are in use from the corn fields of Iowa to the citrus groves of Florida to the Salad Bowl of California. When one is taken off the market, another one is simply introduced, and the threat to workers does not change.

The good news is that there is a better path forward, and it is already working around the globe. We do not have to beat the Big Six directly — we just need to demonstrate and support the better alternatives. Agroecological methods that support healthy soils, pollinator habitats, public health and local economies remain the most successful, sustainable and resilient in the end.

Study after study demonstrates that small-scale and organic farmers can provide enough food to feed the world. The United Nations- and World Bank-sponsored International Assessment of Agricultural Knowledge, Science and Technology for Development (IAASTD), with over 400 scientists, including a Pesticide Action Network (PAN) senior scientist, found that knowledge-intensive agroecological practices are much better at actually feeding the world than chemical-intensive industrial monocropping.

Along the way, programs like the Agricultural Justice Project and Equitable Farming Initiative will help us get there, giving retailers and consumers the standards needed to purchase food that is fair and healthy — so that, in the end, we can all live in a sustainable, healthy, socially just world where such labels are unnecessary.