N’nobua is a community tradition among cocoa farmers in Ghana. N’nobua means “if you help me, I will help you.” Cocoa farming is hot, tedious work performed from the early morning hours in the rainforest. In addition to a cutlass, a farmer’s most treasured item is a pair of rubber boots to protect against scorpions and other bugs crawling around on the forest floor. It’s more than one can do alone so friends and neighbors help one another gather the cocoa pods and break them open for fermentation. It’s a great opportunity to share information about what works and what doesn’t to address the many challenges farmers face with their cocoa crops. It’s also a time to do what friends and neighbors do when they get together – share stories, gossip, laugh, talk about their children and their lives.

Organizing, both formally and informally like n’nobua, is one of the most important opportunities that membership in a cooperative provides to family farmers such as the 60,000 cocoa farmers who belong to Kuapa Kokoo Farmers Union in Ghana. Being organized is a way of having power, a way of not being alone, and a way of having a greater pool of resources to create solutions to problems. Kuapa is one of the most well established and respected Fair Trade farmers organizations because it has formalized farmer participation and grassroots democracy at a significant scale. But Kuapa has also prioritized the role of women in democracy and this makes them unique. 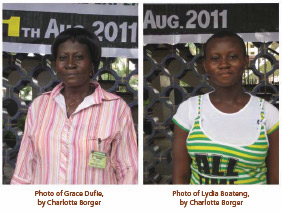 To join Kuapa, farmers must organize themselves into a village society, a local cooperative organization, with an elected board of farmers where women must hold at least two of the elected positions. The requirement of women’s formal representation is consistent at every level of the organization. For nearly two decades Kuapa farmers have trained and encouraged women to participate, stand for election, and become leaders. Women like Grace Dufie, an elected recorder or buying clerk for Kuapa in the village of Gambia 2, Kasapin District, reflects ” Life would be hard if I had not joined Kuapa Kokoo – in Kuapa we are one, all together.” For many women, membership in Kuapa Kokoo is the first time in their lives they have been afforded the opportunity to have a say in a room full of men and be heard.

Why the focus on women? Kuapa recognized that women have a significant role in cocoa farming but because they were not engaged in the selling of cocoa to the buying clerks that collect cocoa in Ghana, they had little access to the economic benefits of cocoa production. In a Fair Trade farmer’s organization that invests in its communities, women also had an important role to play in ensuring that benefits were directed to the whole of a community, including its children. By creating a formal way for women to participate, Kuapa could ensure that women could access money from the sale of cocoa, use that money to feed children, send them to school, and they could also have a say in how Kuapa’s Fair Trade premium is spent. Women’s influence can be seen in the significant investment Kuapa has made in building schools, creating scholarships and creating additional income generation opportunities for women. The first woman president of Kuapa Kokoo was elected two years ago and is a testament to the success of their leadership training and the widespread acceptance of women’s leadership throughout the organization.

Cocoa is seasonal and when the money from cocoa is gone, farmers enter into the ‘lean season’. Families may not have enough to buy food staples, buy school books or pay for uniforms required to attend school, or pay for other emergencies that arise. Kuapa Kokoo started their Women’s Projects to fill this need. Women organize into groups in village societies. The groups then apply to Kuapa’s Credit Union for training and ultimately micro credit loans to help women embark on income generation activities such as soap making, batik, and raising of small animals such as snails and food crops for sale in the local market. Women train together, plan together, and all along the way, learn what it means to be respected in their family and community for their accomplishments. It also changes what women think is possible for the future and that influences what their children believe is possible for themselves. Lydia Boateng, Grace Dufie’s 17 year old daughter says of her mother, “Being in Kuapa has helped her be a good mother to me; she has been able to pay my school fees and I am very happy to go to school. I would like to be a nurse so I can help my neighbors when they are sick.”

When we buy fair trade chocolate we are connected and cooperating with family farmers like Grace and her daughter in the global food system. What we choose to buy and what we choose to eat shapes the opportunities for women and their families the world over. Our job is to strive to be well-informed and deliberate consumers of foods that make it possible for farmers to be treated with dignity and respect. Fair Trade that focuses on family farmer cooperatives enables farmers to collectively invest in healthier communities, better agricultural practices, and democratic empowerment so that the most marginalized, including women and children, enjoy fair and decent treatment.