The past 25 years of NAFTA, or the North American Free Trade Agreement, have been a disaster for working people, farmers, eaters—basically all of us, except a few multinational corporations. Trump campaigned on a promise to fix NAFTA, and, in the fall of 2018, delivered a “New NAFTA,” dubbed the United States-Mexico-Canada Agreement (USMCA). Crafted behind closed doors with corporate lobbyists, that deal was roundly criticized, especially for the giveaways to Big Pharma companies and the lack of labor and environmental protections. Now, after over a year of campaigning and hard work by labor and environmental groups (as well as corporate lobbyists), there is a newly released version of the deal.

New NAFTA has some hard-won changes

As the dust settles and the deal rushes to a vote in the House, it’s a scramble to find out what is in the text of NAFTA 2.0 and what its consequences could be. Some of the big changes in the NAFTA deal that’s making its way towards a House vote:

Corporations Shouldn’t Be Above the Law

Corporations shouldn’t be above the law. But that’s basically what the Investor-State Dispute Settlement (ISDS) provisions of NAFTA (and other trade deals) allows for. Under ISDS, corporations have the ability to sue in private tribunals—and have won hundreds of millions of tax payer dollars as compensation for lost profits due to health and environmental regulations. In NAFTA 2.0, the chapter (11-B) that includes ISDS provisions has been cut. That’s mostly good news, except for the one massive loophole that remains: Oil and gas companies operating in Mexico. Companies like Exxon and Chevron will still have access to that private, corporate-friendly system of tribunals, although there are a few additional requirements in place.

One of the huge failings of NAFTA and other similar free trade agreements like the Central America Free Trade Agreement (CAFTA) is that they drive a race to the bottom with companies flocking to the places with the least regulation and the lowest costs. Thanks to strong advocacy and involvement from unions, NAFTA 2.0 has some promising improvements for workers’ rights, although it remains far from a template for future agreements.

Previously, the system for filing labor disputes was slow and included a standard that labor violations must be proven to be “trade-related,” in a narrow way that has been proven impossible to meet as the systemic outsourcing of jobs to lower cost, lower regulatory locations does not count as evidence. Under NAFTA 2.0, the presumption is that labor rights violations are trade related, and the burden of proof is no longer on the ones filing the complaint.

The enforcement mechanisms include a hotline for workers and unions to report violations. There is also a timeline built in to move industry in Mexico away from company unions to more independent unions, granting workers more power in their representation. The standards also include some timelines to prevent reported violations from dragging on endlessly, as has been the case under previous agreements. Finally, in one of the big victories for workers’ groups, there are now provisions for company-specific enforcement of labor rights violations. Companies can now be fined or have tariffs imposed for violations, with the penalties becoming increasingly harsh for repeat violators—up to having goods blocked at the border. On paper, these standards are an improvement, although it remains to be seen how the inspections and reporting process will take place.

Those are a few of the key improvements in NAFTA 2.0—while they are far from ideal, they are improvements to the existing deal. But NAFTA 2.0 still upholds the fundamental model of its predecessor and is far from what should be considered a decent trade deal, or a template for future deals.

The original NAFTA has put agribusiness ahead of small-scale and family farmers in the U.S., Canada, and Mexico. Each has seen farm families driven off their land. In Mexico, more than 2 million farm families were forced out; Canada lost one-third of its family farms. The U.S. has seen 1/10 of family farms get driven out of business and food imports rise. Across borders, farmers, eaters, and workers have lost income and control of their food system. What they’ve gained: A growing public health crisis. Under NAFTA, corn prices in Mexico plunged 66%, undercut by big agribusiness. Yet the price of staple corn tortillas soared up 279%.

But NAFTA 2.0 fails to address any of these issues. Trump may tout the benefits of the new deal for farmers struggling under the ongoing trade war with China, but the reality is that the tiny increases in market access to Canada for some U.S. dairy farmers is a drop in the bucket. Nothing in this new deal addresses the huge losses that farmers have faced since the passage of NAFTA. Instead, NAFTA 2.0 locks in the favors to Big Food companies, including ignoring calls for country of origin labeling for meats.  Once again, the winners are the big global agribusiness firms and the losers are all the rest of us harmed by the get-big-or-get-out mentality of our current food system. 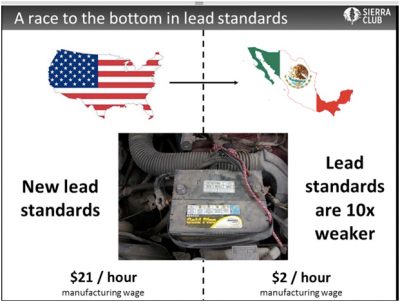 While it’s difficult to assign precise causes to jobs lost over a quarter of a century, economists estimate that the U.S. lost nearly 1 million jobs directly due to NAFTA. Greedy for the profits they could earn off of low wages in Mexico, corporations have moved manufacturing jobs south (and now continue to move on to the next low-cost destination). President Trump has talked about this plenty throughout his campaign for the White House and for a “New NAFTA.” But his proposed revisions to NAFTA do nothing to bring those jobs back. And while the requirements around boosted wages for autoworkers in Mexico talk of a $16 average wage, it’s mostly a trick of arithmetic. Those averages are not minimums. Instead, they count some higher paid manager paychecks as well—another case where the soundbite is much better than the substance. Those lack of wage and outsourcing protections have lead the Machinists Union to be one of the dissenting voices taking a stand against NAFTA 2.0. Even as the new NAFTA is announced, big automakers have announced further plans to shutter plants in the U.S. and move to Mexico.

In the 25 years since NAFTA went into effect, wages have gone down while the wealthiest 1%’s share of national income has shot up 55%. Nothing in NAFTA 2.0 addresses the structural changes to our economy and livelihoods.

We Can’t Afford to Ignore the Climate Crisis

NAFTA 2.0 is stuck in the ‘90s when it comes to the climate crisis. Earlier in 2019 the United Nations issued a dire report: the consensus of global climate scientists is that we have just eleven years to make the massive changes needed to halt climate catastrophe.  “We are the last generation that can prevent irreparable damage to our planet,” warned General Assembly President María Fernanda Espinosa Garcés of Ecuador. Yet NAFTA 2.0 does not even mention climate change, nor does it include the kind of binding clean water, air, or land standards that are needed. Instead, it locks in damaging rules that benefit corporations seeking low, cheap standards at the expense of all of us hoping for a habitable planet. The Sierra Club cites the example of lead battery processing—NAFTA has helped companies take advantage of lower wage and environmental standards in Mexico, shifting jobs and pollution across the border.

While so many of us are talking about the need to transition away from our collective dependence on fossil fuel, NAFTA 2.0 moves in the opposite direction, making it cheaper to produce dirty, dangerous tar oil and fracked gas and writing in big loopholes for oil and gas companies. At the moment when we need to take urgent action on climate, NAFTA 2.0 locks us in to a path forward that is recklessly, willfully ignorant of the solutions at hand.

The updated NAFTA 2.0, or USMCA, deal makes some improvements to the current NAFTA. But those improvements are small compared to the scope of the deal—and the billions of dollars of trade that it will shape. Multinational corporations continue to pursue their profit-driven agenda. Yet theirs is not the only narrative.

When the revised NAFTA was issued in the Fall of 2018, President Trump spoke of it as a done deal. But through the hard work of labor unions, environmental groups, and others across borders in North America, that “done deal” was undone and negotiators were forced to consider the needs of others besides corporate lobbyists. This isn’t the first time that massive collective organizing changed the course of a trade deal (for example, the now defunct Trans-Pacific Partnership or TPP). Those are the victories we will be keeping in mind as this deal moves forward—and indeed, that organizing has made substantive changes in the text of NAFTA 2.0, especially the elimination of the ISDS provisions in most cases.

Yet we continue to keep our eyes on the vision of trade that benefits people instead of harming them a little less. NAFTA 2.0 is not a template for future deals, it’s a floor that deals shouldn’t sink below. But what we really need are new visions for trade that, in the words of Alyshia Galvez in the current issue of our For a Better World magazine, “take into consideration the well-being of communities and the sustainability of the environment.” Let’s keep envisioning that and working for that goal.

Photo by Roderico Y. Díaz on Unsplash: A family in Guatemala indigenous dry part of its corn harvest to ensure native seeds for planting the following year.
“All Ears” by jeffbalke is licensed under CC BY-NC-ND 2.0 – Corn from one of Iowa’s many corn fields.