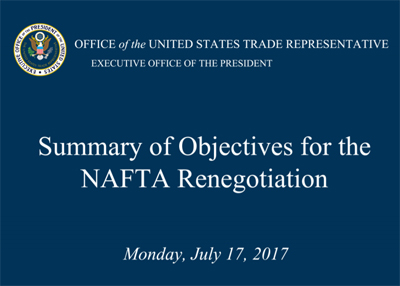 Rather than accounting for the calls from public health, labor, and sustainable agriculture groups to make NAFTA a truly fair agreement, the goals reflect elements of recent poorly crafted trade agreements like the Trans-Pacific Partnership.

Specifically, they lack objectives to conduct negotiations through an inclusive and transparent process, which is the only way to ensure farmers, working families, environment, and public health benefit from the trade agreement, rather than large corporations out to protect the bottom line.

The objectives also indicate that Investor State Dispute Settlement (ISDS) will be expanded, rather than ended. This is the mechanism that allows corporations to sue governments if regulations interfere with profits, undermining environmental, health, and labor regulations local or national governments attempt to set and enforce.

Renegotiating NAFTA can be an opportunity to mitigate and reverse the damage done to millions of farmers and working families in all three countries over the last two decades. Unfortunately, the recently-released objectives indicate the Trump Administration instead intends to double down on provisions that keep working families and small-scale farmers marginalized and instead use NAFTA to boost the profits of the wealthiest individuals and corporations.

Top objectives for any new or revised trade policies should be inclusion of all stakeholders, transparency of negotiations, building sustainable agriculture systems, ensuring dignified livelihoods for all, and meaningfully addressing the climate crisis. Unfortunately the new trade objectives include none of these priorities.

It is urgent and essential that Congress and the President hear from all of us demanding truly fair trade through the NAFTA negotiation!