May Day, or International Workers’ Day this year comes as the U.S. passes a tragic milestone: 1 million infected with COVID-19. The greatest tragedy of all: it does not have to be this way. Too many of the biggest employers in the country have been too slow to respond and have put their own profits ahead of workers’ health. May Day originated in demonstrations in the late 19th century as workers organized around then-radical demands such as an 8-hour work day and against the early industrialists they called Robber Barons getting rich off their exploitation. History calls that time the Gilded Age, calling to mind the riches those wealthy industrialists earned on the backs of those workers. But out of that era also came a broad, international labor movement that shaped the way we work today.

This year, we see a new growth of worker organizing. On May 1st, “an unprecedented coalition of workers from some of America’s largest companies will strike.” Workers from Amazon, Instacart, Whole Foods, Walmart, Target, and FedEx are slated to walk out. Organizers cite these companies’ focus on profits at the expense of workers’ health and safety as the reason for the massive collective action. This moment is historic—most of these workers do not have formal union representation, and many of these companies have successfully squelched union organizing before. But, following a series of successful walkouts over the past few months, workers are building power.  Against the backdrop of this historic movement, long-time food industry analyst Errol Schweizer reflects on Amazon and offers a call to action.

Welcome to the new Gilded Age. In the last couple of months, tech billionaires with names like Gates and Musk have seen their net worth increase by over $305 Billion, while over 26 million people in the U.S. have lost their jobs. At the top of the silicon heap is Jeff Bezos, CEO and founder of Amazon, who’s seen his 11% stake balloon by over $25 billion between mid-March and mid-April, while Amazon’s stock value rose by over $140 billion to $1.4 trillion dollars. How is this even possible?

Well, Jeff Bezos, makes his money the old fashioned way, by exploiting his workers, avoiding taxes, bullying his suppliers and creating monopoly conditions to dominate his competitors. For many online shoppers, Amazon is irresistible due to their “consumer welfare” policy: serving their customers faster and cheaper than anyone else. But that pace and price has resulted in working conditions that are not far removed from what 19th Century Gilded Age exploitation looked like.

Amazon warehouse staff are expected to pick and load hundreds of packages per shift, running back and forth in facilities larger than several football fields. As they dodge forklifts, automated pallet jacks, robots, and each other, they are electronically monitored for how fast and accurately they pick and pack your orders. Breaks are minimal and barely give workers time to walk the massive warehouses for a bathroom break or to stay hydrated. These conditions are exhausting and backbreaking on any normal day. When you compound this with thousands of workers on the floor per shift, lacking essential benefits like paid sick leave and childcare, it is no wonder that Amazon facilities have become hotbeds of COVID-19 infections. Amazon workers in dozens of their facilities have gotten sick and at least one has died from coronavirus related symptoms.

Amazon has had outbreaks in many U.S. facilities, including in warehouses serving New York City, Chicago, Minnesota, and Michigan. They have been slow to respond for calls to deep clean affected facilities and have been vague and circumspect when informing warehouse staff when co-workers have been infected. With viral residue able to survive on packages for over 24 hours, plus working conditions that prevent social distancing, and warehouses not always having adequate stock of gloves, masks and hand sanitizer, many Amazon workers across the country have taken matters into their own hands. Many Amazon workers are recent immigrants and Black and Latino people—the same demographics who are disproportionately represented in Coronavirus death counts. That is not a coincidence. Instead, it is a call to action. Instead of watching the death toll climb among frontline workers, and the communities of color that they disproportionately come from, Amazon needs to put the safety and wellbeing of their workforce first. It’s not like they don’t have enough money to do it.

In New York and Minnesota, Amazon workers have organized protests and walk-outs to call attention to these conditions. They have demanded paid sick leave and a shutdown of facilities with infections, as well as enforcement of social distancing rules.  Some of their leaders have been fired for speaking out and organizing, with one of them, Chris Smalls, even being slandered as “not smart or articulate” by company executives. It’s a tactic that goes way back in history—instead of listening to workers’ demands, Amazon management focused on building a smear campaign to discredit the messenger. Another fired protest leader, a Somali immigrant named Bashir Mohamed, had publicly criticized Amazon’s safety protocols and had gathered petitions from his co-workers. Amazon’s willingness to identify and punish outspoken employees speaks volumes about its true business philosophy and practices

These grassroots actions have gotten the attention of New York State’s Attorney General, Letitia James, whose office is investigating Amazon because the company’s “health and safety measures taken in response to the COVID-19 pandemic are so inadequate that they may violate several provisions of the Occupational Safety and Health Act.” Her office also stated that the firings “raise serious concern that Amazon may have discharged [Smalls] in order to silence his complaints and send a threatening message to other employees that they should also keep quiet about any health and safety concerns.” The letter also called on Amazon to temporarily close such warehouses for “adequate sanitization and disinfection,” citing guidance and recommendations from the Centers for Disease Control and Prevention.

Amazon has used this pandemic to profit off of the many of us who are required to stay at home and minimize our shopping trips. It is time that Amazon does better, instead of driving workers into the ground. A coalition of community groups called Athena, that grew out of the Queens, NYC Amazon HQ2 struggle, has articulated a list of demands, including:

And on May 1st, act in solidarity with Amazon employees who will be walking off their jobs to protest their employers’ failure to provide basic protections. Christian Smalls, who was fired from the Amazon NY facility, is among the courageous organizers of this action, believes “we all have one common goal which is to save the lives of workers and communities. Right now isn’t the time to open up the economy. Amazon is a breeding ground [for this virus].” Don’t order from Amazon on May 1—or its Whole Foods subsidiary.

Even as thousands of small businesses are shutting down or going bankrupt due to the quarantine, Amazon is hiring hundreds of thousands more workers, and is poised to take over vast new swathes of an economy devastated by the pandemic. You can bet that once the economy is “open” again, Jeff Bezos’ relentless opportunism will push Amazon to new extremes of online retail domination. Whether or not you’re a customer or a critic, now is the time to push Amazon to do right by its workers, contractors and their communities. 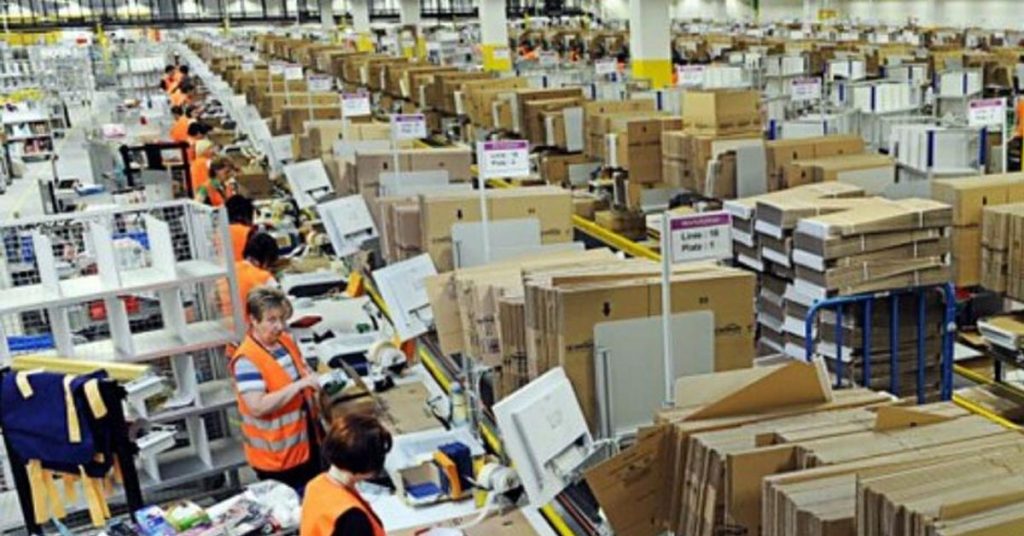