Knowing that was true, I asked Miguel why he’d gone.

Miguel first went to Maine in 2009. There were eight indigenous men chosen from the Lake Atitlán area. One determining factor was that all of them could afford to make the four-hour trip to Guatemala City and pay the required $200 to arrange for an H-2 visa. The H-2 Visa is designed for short-term “unskilled” workers. It so happens that Miguel is quite a skilled gardener, but for his job in Maine he would need no expertise.

There is a great deal of controversy surrounding the H-2 program. Aside from the general complaint that it suppresses opportunities and wages for willing U.S. workers, human rights activists have documented numerous cases of abuse. Federal regulations do provide some protection, but only on paper. Actual enforcement is notoriously weak. The fact is, foreign workers are at the mercy of their employers.

Still, the foreign workers go. In droves. In 2015 there were approximately 140,000 H-2 visas issued to U.S. companies. Miguel went again. Yes, he missed his family, but did what was necessary to improve their lives. He went with the same company, whose name he did not remember. At least that was what he said, perhaps choosing not to incriminate himself should he someday want to be re-hired.

The company bought Miguel’s roundtrip plane ticket. That cost would be subtracted from his paycheck. Upon arrival, he was taken in a van to the grocery store nearest his housing unit. He was given $100 for food and supplies, a sum also taken from his salary.

Work began at dawn the following day. He was paid twelve dollars an hour, and was promised a forty-hour week. From each of his monthly checks there were other routine deductions: the cost of his apartment (he and seven others sharing two small bedrooms, a small living room, a small kitchen), plus whatever electricity and water they consumed. About half of his earnings paid his share of the bills.He told me that the company owned the apartments, which meant that they controlled the costs. “I met illegals,” he said, “with places of their own. Nicer places than ours for cheaper rent.”

He and his housemates worked at hotels, office complexes, and private mansions. They pruned trees, mowed lawns, whipped weeds, and maintained flowerbeds. Miguel did not mind the work. In fact, he wanted more of it. His main complaint was that he never got the promised forty hours.

The thirty or so hours he was given each week were not enough to justify his coming.

“Bad organization,” was the way he explained it. “Too many bosses.” 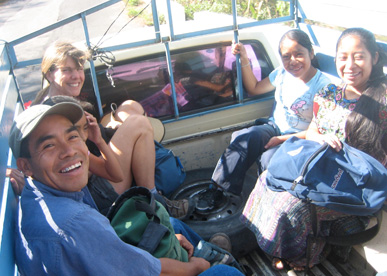 “Every morning we went off with a different boss. He gave orders and we did what he said. Then he drove off in his truck. Later, a different boss might come and tell us to stop. Sometimes we were taken back to the office to wait for other orders. Sometimes we did nothing for half the day.”

“You didn’t get paid for waiting?”

“They didn’t speak Spanish. The only one was the main boss, the man who hired me. He helped when he could, but most of the time he was gone.”

Miguel kicked at the dirt and said that none of his bosses (including “the main one”) understood how much he’d counted on a full week of work. “They didn’t care,” he grumbled. “They did what was best for themselves.”

“Did you feel cheated?”

“Not really cheated, just ignored. There wasn’t any respect for us.”

“Overall,” I said, “it sounds like a bad experience.”

Though Miguel is normally a very happy guy, full of smiles and jokes, his remembered sadness was now visible. I saw that he wanted to forget what had happened and return to his Guatemalan life. Still, it seemed that one more question was necessary.

“In the future, if they ask again, will you go?”

“Probably,” he said. He looked embarrassed to admit it. “They do want me back, and will save a place, but not for long. If I go within three years I won’t have to pay the visa fee. I am lucky to be on their list. Not many of us get this chance.”