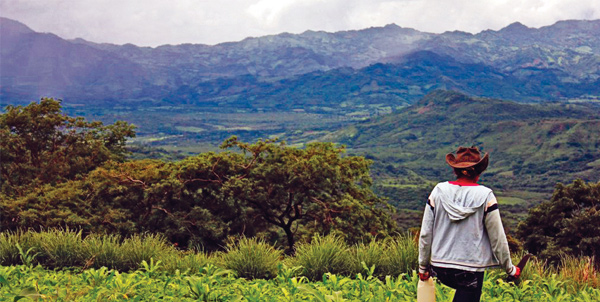 Faced with the challenge imposed by climate change and the use of indiscriminate agrochemicals that degrade our natural resources, 260 women farmers in the north of Nicaragua, organized in cooperatives and backed by La FEM, have started a series of initiatives that are environmentally friendly. La FEM is a cooperative of women farmers, organized with the Foundation of Women from the north of Nicaragua, that promotes the production of native seeds and the use of methods to help address climate change as forms of resistance to the use of seeds and technological packages offered by multinationals like Monsanto.

In Nicaragua, multinational companies continue to promote the use of indiscriminate agrochemicals through enormous public relations campaigns that try to manipulate peoples’ consciences while hiding the negative consequences. 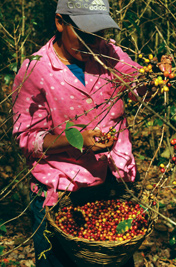 Nicaraguan soils have been continuously degraded as the result of poor agricultural practices in the past, combined with the effects of climate change and the emergence of chemical-resistant diseases. This presents a serious threat to the production levels of many different crops that not only provide food for rural communities, but also supply local and foreign markets. In response, the women farmers have taken huge steps in the production of organic crops.

These multinationals offer “terminator seeds” that don’t germinate after a single season, technological packages that only generate further dependencies and are a threat to the continued use of our native seeds. When confronting this type of dictatorship, Nicaraguan farmers’ life plans become entrapped in a struggle for their own existence.

These efforts focus on the organization of groups of women who specialize in the production of organic and foliar fertilizers whose cost of production, when combined with resources found within their communities, are very beneficial. With actions like these, we are also confronting the effects and damages created by “coffee leaf rust” that have devastated coffee farms in Nicaragua.

In spite of their adversities, cooperative members managed to export over 60,000 pounds of organic, fair trade coffee to the United States and Denmark, with special allies, such as Just Coffee, whose support and solidarity has been critical, not only economically but also emotionally.

In the north of Nicaragua, there is a popular saying: “Big problems, big solutions.” In the face of climate change, La FEM and the farmer cooperatives are showing their ability to move forward with adaptation efforts in order to strengthen organizationally and improve the quality, productivity and yields on every farm.

Included in these laudable initiatives is the effort to establish an organic fertilizer plant to produce more than 350,000 pounds of organic fertilizer per year. The fertilizer would be applied to the fields with the purpose of achieving organic agriculture in every production cycle.

In the same way, La FEM has been working for over ten years to promote and articulate different tasks meant to rescue distinct varieties of native seeds. Each year, farmers harvest between 450,000 and 500,000 pounds of beans, one of the main staples in the Nicaraguan diet. The women of La FEM have become empowered in validating native seeds that are resistant to droughts and pests, which is precisely relevant now given ongoing climate change.

In the area of agricultural production, La FEM works with new strategies to strengthen varieties of native crops that are adaptable to the region. The women farmer cooperatives rely on four seed banks in order to guarantee quality and plant the seeds at opportune times in each growing cycle. These crops are produced in the rainy season, as well as year-round in areas with irrigation. 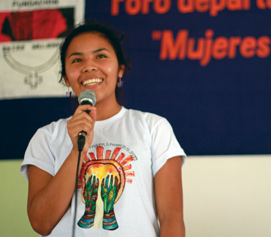 These and other actions have only been possible thanks to the level of consciousness and integrated empowerment reached on behalf of farmers, driven by La FEM. These actions emphasize the defense of women’s rights as a fundamental focus of the struggle against gender violence.

It is important to point out that last year, during a forum sponsored by La FEM and the Spanish NGO Paz con Dignidad, a study was presented to women farmers by the Multinational Observatory on Latin America (OMAL) about the negative impacts that businesses like Unión Fenosa, Repsol, Telefónica or Banco Santader have on Nicaragua. The forum helped raise awareness about how to avoid acculturation and preserve the national culture.

Stand with La FEM and support the rights of women, farmers and citizens as they care for their people, their land and the food that supports us all.