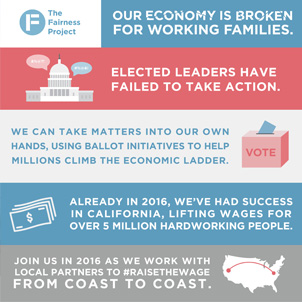 Quietly, hidden behind the headlines that feature presidential candidates bemoaning the state of our country and our economy, voters in several states are no longer waiting on politicians. They’re taking matters into their own hands and launching minimum wage ballot initiatives to create the economic change people sorely need. The impetus for these campaigns is simple and stark: Economic inequality is one of the top issues of our time.

While fully correcting our economic ills that have steadily gotten worse over the last three decades won’t happen overnight, the most immediate and available step forward is raising the minimum wage. Bolstered by the power of ballot initiatives and encouraged by millions of grassroots supporters who have made their voice heard through years of protest, these campaigns are turning talk into action, and seem destined to deliver raises to millions of hardworking Americans this November.

Since the early 1990s, stagnant income has left behind millions of working families in an economy that is fundamentally stacked against them. In the richest country in the world, in the 21st century, millions of Americans go to work every day and yet still live in poverty. We are living within a broken system that needs to be fixed.

As it stands, we currently use government programs like food stamps, the earned income tax credit, and Medicaid to subsidize employers who systematically and purposely pay low wages. Recently dubbed the “parasite economy,” it’s a dynamic in which businesses cling to broken and damaging lowwage models that send workers home with a paycheck that simply can’t cover the bills, and leave the rest of us to pick up the tab. This approach is destroying the American dream. What are we saying about the value and dignity of work when a full time job can’t even come close to supporting a family? What message are we sending about personal responsibility when we accept that working hard is no longer enough to meet basic needs?

We know from polling and conversations that a significant majority of business owners recognize we have a problem with inequality in America and agree that we should raise the wage. But there is a significant difference between acknowledging a problem and acting.

Too many employers still behave as if improving the wellbeing of workers and families is someone else’s job. But that mindset is a mistake. Business owners decide every day how to run their businesses, and they can just as easily decide to make real change by investing in their workforce as they can shy away from paying and treating their employees fairly. Just as businesses and customers of organic product companies have led the change by embracing fair trade, organics, and sustainability, businesses now have the opportunity to support fair pay for all workers here at home.

The momentum for raising the minimum wage is palpable across the country. Hardly a week goes by without workers taking to the streets, in protests demanding that their hard work be fairly compensated. What started as a small movement in coastal cities like Seattle and San Francisco is beginning to spread throughout the country.

Sadly, our federal minimum wage continues to stagnate at $7.25/hour (just $15,080/year) and has far less buying power than it had in the 1960s. Despite the best efforts of advocates and allies, the outlook for federal progress on the issue is dim.

The wide dissatisfaction with political leadership that we see in every state, city, and town in America is based on a common and well-founded belief that elected leaders will not enact the changes needed to reduce economic inequality and help working people make progress toward achieving the American dream. However, in many parts of the country there is a solution – direct democracy – and more and more voters are seizing the opportunity to do on their own what politicians cannot or will not.

Our organization, The Fairness Project, encourages and backs state- and city-based ballot initiative campaigns and raises national awareness of the need to bring economic fairness to tens of millions of people. The Fairness Project helps put political power directly into the hands of voters to enact the economic improvements they want and need, and no issue is riper for this type of direct action than raising the minimum wage.

In 2014, four initiatives to raise the minimum wage were successful, even though they were in conservative states – Alaska, Arkansas, Nebraska, and South Dakota. More recently, ballot initiatives catalyzed action at the state level. In California, the Governor and Legislature enacted a $15 minimum wage law just one week after a popular $15 minimum wage initiative qualified for the ballot. Oregon’s legislature also passed a significant minimum wage increase in response to a ballot initiative and after deliberation with business owners, advocates, and workers. And, in Washington, D.C., a $15 minimum wage looks almost certain after Mayor Muriel Bowser switched her position and announced her support in response to a ballot measure that was sure to qualify for November.

Voters in four other states are putting minimum wage on the ballot this year – Arizona, Colorado, Maine, and Washington – states that span the political spectrum and offer millions of Americans a raise in November. In Maine, the campaign Mainers for Fair Wages has qualified the measure for the ballot and voters will have the opportunity to vote on a $12 an hour minimum wage to be gradually phased in by 2020. Following in the footsteps of states like California, the policy will also eliminate the tipped penalty, meaning all workers, including those who earn tips, will be paid one fair wage. In Colorado, Colorado Families for a Fair Wage is pushing to place on the ballot a $12 an hour minimum wage to be gradually phased in by 2020. Raise Up Washington and Arizonans for Fair Wages and Healthy Families are also including earned sick time in their policy proposals, which aim for a $13.50 an hour minimum wage by 2020 (Washington) and a $12 an hour minimum wage by 2020 (Arizona). All of these campaigns enjoy significant support from voters and are presenting policy choices that are reasonable, transparent and fair.

Coalition partners in these states have worked diligently with economists, policy experts, local businesses and workers to think through why their communities will benefit from a raise to the levels they propose. The result is reasonable policy that will raise the floor in these states and spur economic growth for local businesses.

Furthermore, in each area the wage is phased in over a number of years, making the increases predictable and transparent. These campaigns are not proposing radical shifts overnight that will disrupt markets, but rather, long-term horizons that ensure businesses and communities can adapt and thrive.

Finally, these campaigns aim to reach a minimum wage that gives all individuals who put in an honest day’s work a shot at escaping poverty. These aren’t handouts; they are efforts to restore the value of work, a cornerstone of the American promise.

The challenges that face working families are not insurmountable. In fact, we know how to fix them. Simple and reasonable steps like raising the minimum wage, providing earned sick days, and easing the burden of student debt would provide immediate benefit to millions of lowwage workers and middle class families. If our elected officials refuse to act, then voters across the country are clearly saying they will find another way to move forward. The campaigns in Washington, Colorado, Arizona, and Maine have the opportunity to not only deliver much-needed raises to working families, but also to pave a road forward in which the people take collective action to restore balance and shared prosperity in our economy.

All graphics credit: The Fairness Project