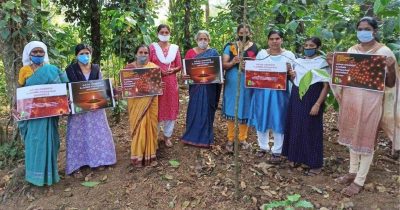 Photo Credit: Tomy Mathew Vadakkancheril
About: Farmers of Fair Trade Alliance Kerala assembled in 20 locations across the Malabar hill tracts paying homage to the brave hearts who lost their lives as they laid siege to the national capital in defence of peasant rights.

The protests by Indian farmers who have laid siege to the nation’s capital, Delhi, is, in its essence, a uniquely Fair Trade moment. For while the immediate provocation for the present agitation are the three new farm bills introduced by the Central government under cover of the COVID restrictions, the most articulate demand from the farmers cannot be missed: Minimum Support Price for their produce. Minimum Support Price is near akin to the Fair Trade Minimum Price in trade justice parlance.