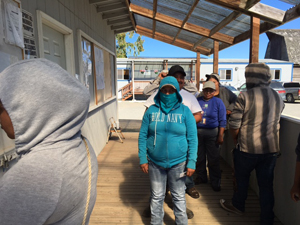 Several years ago we heard about a labor dispute in Washington. A group of farmworkers organized as Familias Unidas por la Justicia had coordinated a series of walkouts and lawsuits to demand changes at the farm, including paid breaks, better housing, higher pay, among other improvements.

By the time we heard about their struggles, they had already won several victories, including a court case that set a precedent for the entire state of Washington, requiring all farms that paid piece rate to pay farmworkers for rest breaks at their average rate.

However, the farmworkers were asking to negotiate a fair contract and management would not sit down to negotiate.

The farmworkers were so frustrated that they were calling for a boycott of the farm, Sakuma, as well as major buyers Driscoll’s and Haagen-Daaz ice cream.

As an organization that advocates for fairness throughout the food and agriculture system, we offered our support to FUJ’s cause. We saw this as a way to advocate in a very real way for a group of workers who were not protected by laws that protect other workers and who were choosing to organize and negotiate a fair contract, while at the same time raising broad awareness for the reality that most farmworkers face.

We are thrilled to report on the success of this campaign. We rallied consumers to show support for farmworkers and we met with both Driscoll’s and Sakuma to talk about their needs and challenges. These efforts not only engaged broad stakeholders, they culminated in a meaningful agreement between Sakuma and FUJ that can now serve as a model for other organized farmworkers and farms throughout the country.

Here is the thank you letter to those that showed support for farmworkers through our campaign.

We hope that you have heard the news by now that Sakuma Brothers Farm and independent union Familias Unidas por la Justicia (FUJ) sat down together this summer for two meetings, leading to an agreement on how to move forward together, ending a four-year long labor dispute and boycott. Both the farm and the union, with this agreement, have committed to a path forward that benefits both the farm and the farmworkers.

This is great news and we wanted to thank you for your support. Through your support of our petitions and letters to Sakuma and one of their major buyers, Driscoll’s, you signaled that there was broad support for such an agreement to benefit both farm and farmworkers. Your voice was heard. Your support appreciated.

Because farmworkers are not covered by the National Labor Relations Act, there is no legal framework to guide farms on which farmworkers choose to organize. Sakuma approached Fair World Project with a proposal for moving forward in the absence of a legal framework. We were happy to pass along the initial proposal to FUJ and play a supportive role facilitating communications and meetings until a final agreement was reached. This final agreement can now serve as a model for other farms and farmworker organizations across the country.

And there’s more. Part of the agreement was to hold an election to give all farmworkers on the farm a voice in how they wanted to be represented on the farm. This election would ensure a fair process and voice for all workers.

This historic election was held on September 12th. FUJ was elected to represent the hand harvesters of Sakuma Brothers Farm. A contract negotiation will begin soon, with the expected outcome of a contract that formalizes policies and practices that benefit both the farmworkers and the farm business.

This is an exciting moment for all advocates who wish to see both social justice and financial viability on farms.

Thank you again for your support!

1 thought on “Historic Farmworker Agreement Is Model for Farms”