COVID-19 is revealing the ways in which our food and farming systems are designed to extract the maximum from people and the planet in the interest of corporate profits. We talk often about how corporate consolidation gives just a few big companies the ability to push low prices and lousy terms downstream onto cocoa and coffee farmers. But that’s just one piece of the Big Food playbook. This week, food industry analyst Errol Schweizer looks at the meatpacking industry, where Big Food companies have been using their massive, consolidated power to drive down wages and drive up the danger at work for years.

Coronavirus has pulled back the curtain on many of the worst contradictions in our food system. Since March, headlines have been non-stop about food waste, inefficient supply chains, and empty grocery shelves. Food workers face daily exposure to COVID-19 and are risking their lives for their jobs. The epicenter of both these food system woes and skyrocketing infection rates is our highly consolidated meat industry, particularly the Tyson, JBS, Smithfield and Cargill monopolies in beef, pork and poultry. Meatpacking workers are getting sick by the thousands.  It is time for the regulators tasked with protecting their health to issue clear, mandatory guidance for workers on the frontlines of the COVID-19 pandemic.

The meat and poultry industry has experienced massive consolidation in the last 40 years, while relocating production facilities in rural areas out of the public eye. These processing facilities are massive, employing thousands of people on a daily basis and processing millions of animal per year. Working conditions are abysmal and safety enforcement is lax, according to Human Rights Watch, with chronic illness and serious injury the norm among workers. Processing lines run at breakneck speeds to turn dead carcasses into consumer-friendly portions, resulting in repetitive motion injuries for many workers. Restrictive personnel policies don’t allow adequate bathroom breaks, and cavalier approaches to CDC and OSHA guidelines do little to protect worker health and safety. Nearly two-thirds of meat and poultry plant workers are immigrants and people of color, with many refugees and formerly incarcerated individuals as well. After decades of corporate consolidation and relocation to rural areas, meat industry wages have plummeted, with current wages averaging $14 per hour, a drop of 50% since the 1970’s. Workers rarely have paid sick leave and benefits are minimal, and many of them can only afford to live in substandard housing with many roommates and family members. Upton Sinclair, who wrote “The Jungle” over one hundred years ago would recognize this new normal in the meat industry: find the most vulnerable people in society, give them the most dangerous jobs at the lowest pay, and rake in the profits off of their misery. Meatpacking was already a dangerous job. Then Coronavirus hit.

The pandemic has had a horrifying and tragic impact on meat plant workers. According to data collected by FERN, over 204 meatpacking and processed food plants have confirmed cases of COVID-19, as of May 12th. Over 14,600 workers have become ill, and close to 60 have died. The rural communities that host meatpacking plants are now nationally significant coronavirus hotspots, outpacing densely-packed cities for infection rates.

Against this backdrop, the chairman of Tyson Foods, John Tyson, took out a full page ad in the New York Times in late April to warn the public that “the food supply is breaking.” Tyson warned of food shortages in grocery stores and huge food waste on farms, with millions of animals being euthanized and composted. Tyson Foods is no stranger to the halls of power and their self-serving attempt at a public service announcement found the right audience. Within 24 hours, President Donald Trump issued an Executive Order invoking the Defense Production Act to compel meat plants to remain open, while avoiding liability for the deaths and illnesses to come, as long as they follow weakly enforced guidelines from CDC and OSHA. Since this announcement, confirmed COVID-19 cases jumped 40% in counties with beef and pork packing plants, compared to a 19% rise nationally during that time period.

The uproar that followed Trump’s Order has brought the plight of meat plant workers into the light of day. AFL-CIO President Richard Trumka blasted the decision, pointing out that, while the President has been slow to act to ensure the production of life-saving protective equipment, he has stepped up quickly, “favoring executives over working people, and the stock market over human lives. He is forcing workers to choose between a paycheck and their health.”

Stuart Applebaum, head of RWDSU (Retail, Wholesale and Department Store Union), which represents thousands of meat plant workers in the Southeast, summed up the situation, saying “It’s the wrong decision because the best way to protect the food chain is to protect the safety of the workers.”

Organizers from Venceremos, an Arkansas-based group organizing poultry workers, have launched an online campaign to support the 30,000 Tyson workers in Arkansas. They are demanding that Tyson provide paid sick leave for workers who need to be quarantined, as well as hazard pay for working on the processing line during a pandemic. Rural Community Workers Alliance (RWCA) has filed a lawsuit against Smithfield in order to force the company to protect worker health and safety. And LULAC, a Latino civil rights group, called for a Meatless May, a boycott of chicken, beef and pork, calling on communities to stand with meat plant workers for safer conditions.

The United Food and Commercial Workers (UFCW), the union for over one hundred thousand meatpacking workers nationwide, has issued five demands for meat conglomerates to protect their employees from sickness: prioritize testing for essential workers, ensure access to personal protective equipment (PPE), reduce line speeds, mandate social distancing in plants, and allow infected workers to quarantine at home with pay.

The HEAL Food Alliance (Health, Environment, Agriculture, Labor) and Food Chain Workers Alliance have penned an open letter to the Department of Labor and Congress. This letter echoes the themes raised by the frontline food workers who make up much of their membership and calls for urgent, mandatory regulatory action to protect them.  Specifically, they call for:

As the organizers from HEAL note, “food workers are not disposable.” It is clear that the meat industry is not going to police themselves, and voluntary standards leave workers vulnerable. Take action now to support frontline workers’ calls for clear rules to protect them in the workplace—and keep more communities from getting sick. 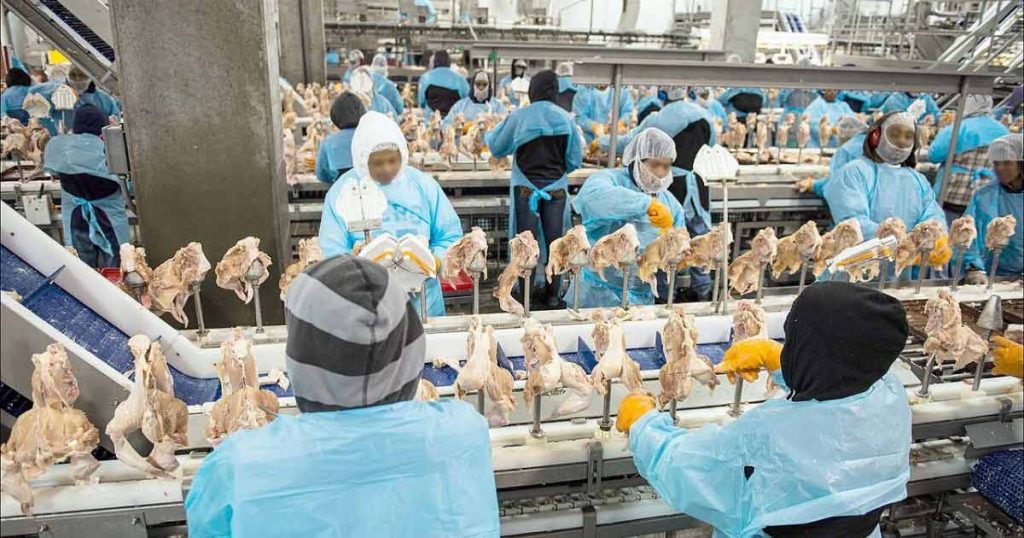