You may have heard about yerba mate, and perhaps even experienced its “feel-good effect,” a combination of the caffeine boost of coffee, the health benefits of tea and the euphoria of chocolate. In South America, however, mate is more than just a beverage. For centuries, indigenous people have shared a gourd filled with mate to symbolize community — and to join together in a vision.

As the first company to bring fair trade and organic yerba mate to the U.S., Guayaki hopes that, by “sharing the gourd,” they can inspire the rest of the world to be part of a vision to empower indigenous communities and protect South America’s rapidly diminishing rainforests. 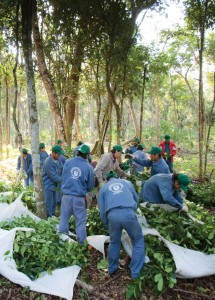 During the junta period in the 1970s, native tribes were chased down nearly to extinction, as their home, the rainforest, was ravaged by industry. Forced onto reservations, the indigenous people lost much of their cultural identity. Although many tribes returned to the rainforest in the 1990s, they lacked a way to earn income and were forced to rely on aid. Prejudice made it challenging for natives to create business partnerships and ate away at their self-worth, leading to in-fighting and alarming rates of youth suicide.

Then, in 1996, David Karr and Alex Pryor came up with an idea — one that could provide jobs and a sense of pride for indigenous communities, while simultaneously creating market value for the rainforest, making it worth more standing than cut down. Yerba mate was the seed from which this dream would grow. The vision was to create a demand for this beverage in the U.S. and partner with indigenous communities to grow mate and other native plants within the rainforest. The more mate they sold, the more jobs they would create and the more acres of rainforest they would rescue.

A Model for Indigenous Communities

In 2002, Guayaki signed a ten-year contract with their namesake, the Ache Guayaki in Paraguay, forming their first partnership and providing the tribe with a long-term source of steady income. Instead of growing mate on plantations, where most of it is produced, Guayaki’s agro-forestry sage helped the Ache learn how to organically cultivate mate within the rainforest, where its nutrients are shaded from the sun. Harvesters learned how to hand-pick the mate for optimum quality, while protecting the health of the tree for future harvests. Others mastered the art of drying mate at low temperatures and aging it to lock in antioxidants and flavor. “Ten years later, the Ache are thriving and have what they need to be self-sufficient, including a knowledge of agro-forestry and biodiversity — and that is being passed on to their children,” says Pryor.

As a real-life success story, members of the Ache tribe and Guayaki have been asked to teach other tribes, as well as governmental and non-profit groups, how to replicate the model. One of the most exciting results of the partnership, though, was in July of 2012 when the government voted to award the Ache with legal title to their land. “Thanks to the work we did with Guayaki, we could prove to the Paraguayan authorities that we are capable as an indigenous community of developing and running a model project and making good use of the forest,” says Emiliano Mbejyvagi, a young Ache leader. “We are proud to be a role model that protects the environment.”

Guayaki now works with six tribes, including the Marrecas in Brazil, a project that is part of the Clinton Global Initiative. “So far, Guayaki has created jobs for over 225 indigenous people and has restored more than 40,000 acres of rainforest,” says Karr. “By 2020, our mission is to restore 200,000 acres and create 1,000 jobs.”

In South America, sharing the gourd is similar to passing around a microphone. Whoever holds the mate has the opportunity to share their point of view. “It is about building relationships that make us all feel alive. We share mate to celebrate culture and to create a spirit of hospitality and dialogue,” says Pryor. “The relationships we have built provide equal opportunity for everyone to freely express themselves, creating a healthy democratic community.”

To ensure that all voices are heard, Guayaki organizes annual workshops that bring together indigenous community leaders, government officials, NGOs, local business leaders and even the mayor from the closest town. “We talk about our dreams, challenges and what we want to create together. It shifts the dynamic. People communicate in a different way, and the indigenous people are celebrated and respected,” says Chris Mann, CEO. “It’s about being partners, sharing what each of us knows, and growing and benefiting together.”

Women are also empowered through this model. In fact, the Ache’s chief, Margarita, was recently named Paraguay’s “Woman of the Year.” “We do not see each other as business partners,” she says. “We see each other as brothers and sisters. Everyone is equal.”

In addition to paying 50% over market prices, Guayaki’s 10% fair trade premium helps fund schools, clean water, healthcare and shelter. The Marrecas also voted to use their premium to host an annual cultural celebration. At first, the certifiers denied it, but Guayaki and the community convinced them that it was not just a party — it was a reclamation of their cultural identity. “The most common challenge indigenous communities face is cultural value,” says Pryor. “When cultural value is attained, indigenous communities feel empowered, and economic growth comes naturally.”

Furthermore, to ensure economic stability, Guayaki has helped the community establish other sources of income, so that only half is now derived directly from the company. The Ache’s partnership with Guayaki has proven that they are reliable partners, and they now work with several other businesses growing organic crops. They earn additional income by teaching other tribes how to grow mate and by selling native plants. Guayaki provided a zero-interest loan for an air dryer that can be used for other needs as well, and even pays the Ache a royalty for the use of their name.

To educate future generations about organic, fair trade and agroecology principles, Guayaki, in conjunction with the Patagonia and Forecastle foundations, funds an afterschool program for more than 400 students. Over 3,700 native trees will be planted through this program.

At meetings in the U.S., Guayaki employees also share the gourd, as well as their dreams and concerns. Repeatedly named WorldBlu’s “Most Democratic Workplace,” the company offers stock options after two years, and, because it is a certified B-Corp, its democratic, social mission is legally protected. Guayaki is committed to a vision that not only cares for the rainforests but also the people who live there. When you drink Guayaki, you become part of this vision, too.

“Everyone is a part of this mission, from our farmers and employees to our investors and customers,” says Pryor. “This shared vision is the soul of Guayaki.”