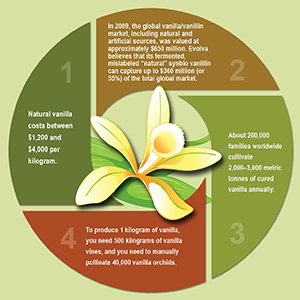 A new generation of flavors, fragrances and oils are entering many of our favorite foods, cosmetics and staple household products, produced via a new, extreme form of genetic engineering known as “synthetic biology” or “synbio.” Similar to GMOs, these ingredients stray far from fair trade principles. They are being falsely marketed as “natural” and “sustainable,” but are neither, and they pose threats to the livelihoods of small-scale farmers across the world.

So, what is synthetic biology? It is a term that refers to a set of genetic engineering approaches to artificially construct genetic material such as DNA in order to create entirely new forms of life or attempt to “reprogram” existing organisms, such as yeast and algae.

Synbio vanilla, the first major synbio ingredient to enter our food supply, is made in a lab with synthetic DNA and reprogrammed, synbio yeast that feed on sugar. It could be in your ice cream, yogurt and other foods by the end of this year. Synbio vanilla, like all synbio products, is virtually unregulated and is not required to be labeled or undergo independent health or environmental assessment.

The misleading “natural” label will make it hard for consumers to know if they are supporting small-scale, sustainable vanilla farmers or synbio companies. It also means that companies that previously sourced vanilla from small-scale farmers may choose to source the less expensive synbio vanilla, reducing demand and the price farmers receive for truly natural vanilla.

Vanilla is the second-most expensive flavor and fragrance in the world, after saffron. Its high price is due to extremely labor intensive cultivation and harvesting practices. The harvesting of the seedpods, which are found in tropical rainforests, requires specialized knowledge of the vanilla plant, knowledge that is passed down between generations of farmers. Currently, more than 200,000 small-scale family farmers in rainforests across the Global South produce natural vanilla beans.

Alejandrino Garcia Castaño, age 23, comes from a lineage of vanilla farmers. He is a graduate of the Intercultural University of Veracruz in Mexico and works at the Center for Indigenous Arts in Veracruz. He lives in his indigenous hometown, Totonacapan, which, according to his cultural history, is said to be the origin of vanilla.

“300 years ago, the communities of Totonacapan were amongst the first to establish a relationship with the vanilla orchid,” explains Alejandrino. Natural vanilla is now produced and harvested by farmers in rainforests in Madagascar, Mexico and across Southeast Asia. “Everything in our region relates to vanilla. Its cultivation symbolizes many things: the history of our indigenous community, our ancient knowledge and traditions, the protection of biodiversity, and the use of low-impact technologies to harvest the delicate plant,” he adds.

The process of vanilla cultivation is complicated and unique. Natural vanilla comes from the cured seedpod of the vanilla orchid. “The vanilla orchid flowers only one day of the year. When it opens, the communities in Totonacapan work together to pollinate the flowers completely by hand. It is an ancient tradition; the children learn, the elders teach.”

For Alejandrino, vanilla cultivation and forest preservation are intrinsically linked. Without the natural vanilla market adding economic value to the rainforest, it may be displaced by competing agricultural markets such as soy, palm oil, corn and sugar. “The caretakers of vanilla are the caretakers of the forests. If your economies and cultures (of technology) destroy vanilla, the forests will suffer the consequences, too,” explains Alejandrino.

Synbio vanilla is also a threat to biodiversity because of its dependence on sugar for production. Whereas natural vanilla is grown with few, if any, chemical inputs by a diversity of small-scale farmers, sugarcane plantations are renowned for slave labor-like working conditions, heavy pesticide use, water-intensive cultivation and a dependency on fossil fuels. The increased demand for sugar could result in the destruction of biodiversity hotspots for more sugarcane production, including Brazil’s fragile and biodiverse Cerrado, as well as tropical forests in Latin America, Africa and Southeast Asia.

These problems will be exacerbated as this and other synbio applications scale up to meet increasing demand and replace current production of truly natural flavors, fragrances and oils. Other products in the pipeline include synbio coconut oil substitute, stevia, saffron and ginseng.

Earlier this year, Ecover, Method’s parent company and a leader in green cleaning, announced that it had introduced a synbio algal oil into its detergents, making it the first “eco-friendly” company to admit its use of synbio ingredients. This new ingredient is made by synbio algae that exist nowhere in nature, but Method and Ecover will continue to label their products as “natural” and “sustainable.”

Ecover claims that synbio algal oil will be an “environmentally-friendly, renewable alternative” to palm kernel oil. But while palm oil is a leading cause of deforestation, there is too little knowledge about synbio for it to be rubberstamped as a sustainable alternative. We cannot afford false solutions to real ecological problems.

What do we know? Solazyme, the company producing the synbio algal oil, raises its engineered algae on glucose from sugarcane and dextrose from corn, two of the world’s major biofuel commodities primarily produced via chemical-intensive industrial agriculture. The algal oil is synthetically engineered to maximize its concentration of lauric acid, a compound naturally found in palm and coconut oils. But rather than replace the palm oil industry, which can respond to market changes, this algal oil will likely replace higher-value commodities like coconut oil, impacting approximately 3.5 million small-scale coconut farmers in the Philippines, the world’s leading producer of coconuts. Two-thirds of the Philippines’ coconut farms are owner-operated, providing farmers with sustainable incomes and livelihoods. Coconut trees, known as the “trees of life,” are not only economically important, they are integral parts of Filipino culture and traditions.

Ecover’s actions could open the door for other experimental synbio ingredients to sneak into our foods and consumer products, despite being virtually unregulated, unassessed and unsustainably dependent on incalculable amounts of sugar. “To put a ‘natural’ label on synbio products is a dishonest act which will unleash devastation on small-scale farmers who cultivate the real plants, caring for real people and real forests,” warns Alejandrino. “We have fought to maintain our dignity as producers in a competitive market. We want to continue in a way that will not sacrifice the world’s forests, soils, identities and traditions.”

Until there is strong regulatory oversight, precautionary independent environmental and health assessment, and full transparency concerning the impacts of these synbio ingredients and their required feedstocks, they should not be allowed on the market. We do not have enough information to know that, once scaled up, synbio ingredients will not exacerbate the current unsustainable exploitation of land, labor and life. We need choices which support — not displace — hundreds of thousands of farmers and their diversity of real crops.

This is a critical moment for the fair trade movement to strengthen its support of small-scale farmers, their local products, and a diversity of traditions and cultures. “We know that vanilla is just one of many crops that are under attack by (synthetic biology) technology,” says Alejandrino. “We need help; just like the vanilla orchid needs the whole community’s hands in order to multiply, so do we in order to preserve a healthy future.”

To learn more about synthetic biology, or to get involved, visit
www.nosynbio.org and www.synbiowatch.org.

6 thoughts on “GMOs 2.0: Synthetic Biology and its Threats to Small-Scale Farmers and Fair Trade”