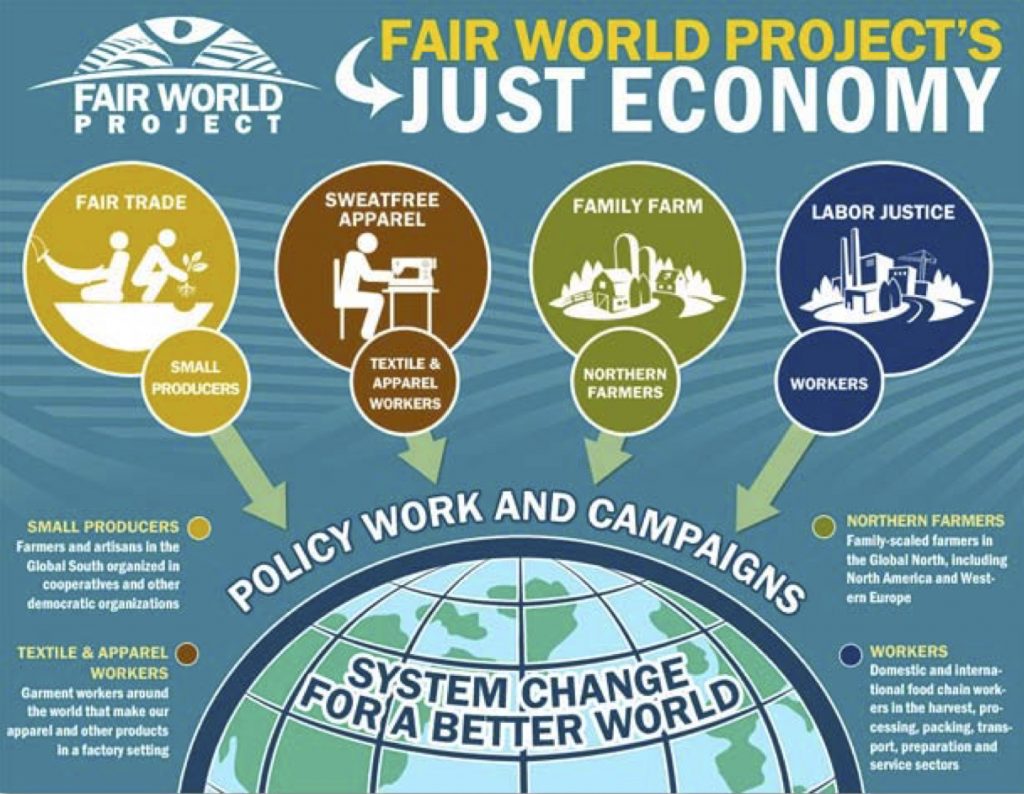 The Global Economic System is rife with abuse and injustice. Most of the people that grow, process and produce our food and apparel suffer poverty wages, unsafe work conditions and other rights violations. The Fair World Project (FWP) supports diverse mechanisms and pathways to justice in the marketplace. While not a panacea, these mechanisms provide concrete opportunities for consumers to support products that reflect their values, educate others, and provide a lifeline to farmers, workers and artisans, while we simultaneously work in conjunction to improve the global system that impacts us all.

The food and apparel economies are extremely varied and often complex, and reforming and transforming them requires different approaches. One size does not fit all, but solutions involve the following principles :

Four programs — Fair Trade, SweatFree Apparel, Family Farm, and Labor Justice — support broader movements for systemic change in our food and apparel systems, which aim to transform an unjust economic system. Together, they drive a larger movement for justice and sustainability.

Small-scale farmers in the Global South not only form the backbone of our global food system, but according to the United Nations Special Rapporteur on the Right to Food, small farmers hold the key to doubling food production while mitigating climate change and alleviating rural poverty. Fair trade provides an important tool to keeping small farmers on their family?s land by providing access to ethical markets, that ensure fair prices without child or otherwise exploitative labor conditions.

Artisans in the Global South have been designing and crafting products for over 60 years to financially support their families and create a pathway to people centered development in their communities.  Fair trade artisans and farmers are often part of the same families and communities, mutually supporting each other. Unlike agriculture products, fair trade crafts are not certified by 3rd party agencies, but are traded based upon fair trade principles and long-term trading relationships.  Organizations trading in the Global North become members of the World Fair Trade Organization (WFTO) or the Fair Trade Federation (FTF) to show their commitment to building fair trade relationships with artisan groups in the Global South.

The apparel industry has a long history of widespread abuses from top to bottom. Sweatfree Communities defines a sweatshop as a “workplace where workers face very poor conditions, including poverty wages, exceedingly long hours, unsafe and unsanitary environments, harassment and discrimination. Sweatshops offer employees few benefits, and frequently fire workers for involvement in unions and in the event of pregnancy or injury.” Years of organizing by apparel workers, students and other allies have propelled the plight of apparel workers to the forefront of ethical consumer awareness, and provided such consumers, universities and government institutions sweatfree apparel alternatives.

The Worker Rights Consortium (WRC) is an independent labor rights? monitoring organization that investigates working conditions in factories around the globe to combat sweatshops and protect the rights of workers who make apparel and other products. The WRC also issues public reports on factories producing for major brands, and aids workers at these factories in their efforts to end labor abuses and defend their workplace rights.

The Agriculture Justice Project (AJP) is a non-profit initiative to create fairness and equity in our food system through the development of social justice standards. The AJP “Food Justice Certified” seal represents a high bar standard for justice and is the most rigorous third party verification process in North America. AJP’s standards were developed over four years of stakeholder input?involving farmers, farmworkers, and indigenous, retail, and consumer groups?and are an attempt to codify in concrete terms what making a legitimate claim of “social justice” in organic and sustainable agriculture means.

According to the Food Chain Workers Alliance, over 20 million people work in the food system in the U.S., and millions more around the world toil in the food sector. These workers are among the most exploited and poorest in the world, planting, harvesting, processing, packing, transporting, preparing, serving, and selling food. Labor justice efforts include supporting farmworkers both at home and abroad and strengthens food workers’ ability to organize by transforming both institutions and markets to provide livable wages and safe and equitable workplaces. A number of initiatives are emerging to advance the rights of workers in the food chain.

FLO has launched an initiative that looks promising, known as the Advisory Committee on Workers’ Rights and Empowerment (WRAC), to advance worker empowerment on fair trade farms. [JY – WRAC link is broken]

Labor unions, like the Teamsters, have taken proactive steps towards bridging the divide between organized workers and other fair and green movements, including offering solid recommendations for improving standards on fair trade farms as well as advancing green jobs and sustainable supply chains. [JY – Improving Standards link is broken]

FWP is an advocacy organization focused on advancing a Global Just Economy by educating and activating consumers in partnership and support of small farmers, artisans and workers, at home and abroad. Through marketplace campaigns and policy advocacy, FWP aims to transform the global economic system in favor of disadvantaged and vulnerable communities.

System Change For A Better World

Our vision is of a just global economy in where humans are treated justly and with dignity, where the environment is respected and nourished, where commerce fosters sustainable communities and a global society based upon cooperation and solidarity. We envision an economic culture in which values, defends and supports the contributions of farmers, workers and artisans. To achieve this, FWP educates, advocates and agitates at home and abroad.