A coffin if you join the management-controlled union. That’s the offer being made to workers on Fyffes Honduran melon plantations. That coffin is a grim symbol of just how Fyffes treats their workers. Working unprotected with toxic chemicals, without the prospect of retirement or adequate healthcare, and with the ongoing threat of violence, death does not seem like an abstract possibility. Treated as expendable, they are trapped working for Fyffes, the main employer in the region, until they are too sick or injured to work anymore, or until they die.

Those conditions, plus the efforts of workers organizing to combat them, are detailed in a new report, Fyffes Farms Exposed: The Fight for Justice in the Honduran Melon Fields, released by Fair World Project, International Labor Rights Forum, and the International Union of Food Workers Latin America Regional Secretariat, with support from 3F International. The report calls on Fyffes to take responsibility to remedy injustices on their Honduran melon plantations and to commit to a legally-binding, enforceable agreement to uphold workers’ rights. 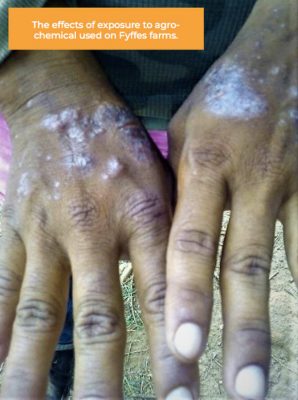 “They use chemicals, we can smell them,” said one worker. “They put poison on the plants. We aren’t given masks. Once, I was fumigating with Random. It spilled. It felt like a bomb in my lungs. I didn’t report it. I didn’t receive any training before fumigating.” Other workers tell stories of fainting in the fields from chemicals and of being hospitalized, yet fearing for their jobs if they reported their injuries. Women report that despite the fact that it’s against Honduran law, they are forced to take a pregnancy test before getting hired and those who are pregnant don’t get hired, while those who conceive while working are reassigned.

Not only are conditions dangerous, workers are frequently not paid for hours worked and denied overtime pay for long days. Fyffes has also withheld the benefits owed under Honduran law, a sum that counts for a calculated annual wage theft of $5,087,590 across Fyffes’ seasonal workforce of 6,500 people. That theft from workers adds up: Honduras is the second poorest country in Central America and in the region where Fyffes operates, one in three people experience malnutrition.

Fyffes Has a Long History of Exploiting Workers

Workers on Fyffes’ plantations in Honduras have been stuck in a years-long struggle for basics: protection when handling toxic chemicals, payment for hours worked and benefits earned, and freedom from discrimination if they get pregnant.

To defend their basic workplace rights, the people, mostly women, who harvest and work on the melon farms came together and organized with the independent union El Sindicato de Trabajadores de la Agroindustria y Similares (STAS). Instead of sitting down with union leaders, however, Fyffes’ farm management took the opposite approach, refusing to recognize the union and beginning a campaign of threatening and harassing workers.

The report details Fyffes’ long history of trying to cover up the abuses on their farms, trusting that out of sight and offshore from their biggest market means out of mind. They even enlisted Fair Trade USA to help rebrand their model with a shiny veneer of fairness. But the workers’ voices have been heard and, thanks in part to the outpouring of nearly 10,000 messages from around the globe, Fair Trade USA revoked the certification of their Honduran plantation. The Ethical Trading Initiative (ETI) also kicked Fyffes out, recognizing that the way they treat people who work on their farms was not fit for the word “ethical.”

But exploitation on Fyffes Honduran plantations continues. And, instead of sitting down to address the workers’ long-standing concerns, Fyffes has instead turned up the disinformation. 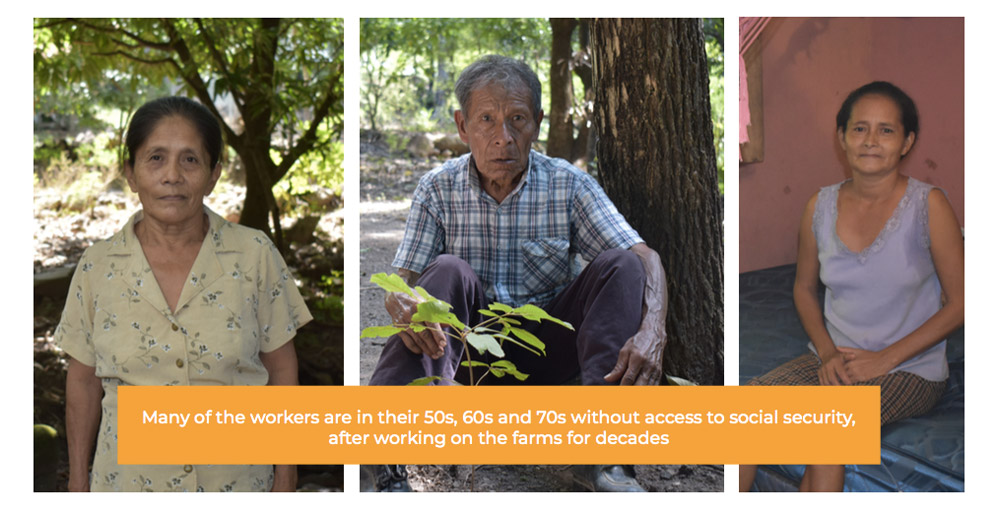 Usually, unions are formed by workers organizing and coming together to agree on their needs and build power. Those independent, worker-led unions then negotiate with management for better wages, safe working conditions, and other concrete needs they have identified. But on Fyffes melon plantations, management has backed the formation of two organizations, posing as farmworker unions, SITRAMELEXA and SITRASURAGROH, led by salaried workers and other members of management.

It’s a common tactic to combat workers’ organizing—instead of recognizing the workers’ own independent union, management puts forward another union and confuses the situation. It may not be uncommon, but it is against the principles of international labor law. Fyffes’ company-controlled unions continue to muddy the water, trying to mire the workers’ legitimate concerns in an alphabet soup of different names and claims. But the bottom line remains: Workers continue to be exposed to toxic chemicals, lack proper protective equipment, and Fyffes continues to deny them legally mandated benefits.

Instead of negotiating with workers, Fyffes representatives have gone in the opposite direction. They illegally fired workers who tried to organize back in 2016 and have continued to blacklist those workers, preventing them from earning a living, as well as harassing some to the point where they fear for their lives. The report chronicles a machete attack, kidnapping, and locking union leaders in company offices to coerce them into quitting their organizing.

That kind of retaliation is forbidden by international labor law – and by the codes of conduct of the U.S.-based supermarkets, many of whom continue to buy from Fyffes.

Organized Workers Are the Best Defenders of Their Rights

For decades, these workers have grown fruit for supermarkets in the U.S. in dangerous conditions for poverty wages. Fyffes’ corporate social responsibility initiatives have delivered some public relations material, but no substantial changes in the lives of their workers. Instead, generation after generation of workers have given their entire lives to these plantations until they are too physically sick or injured to work, or until they die. That promise of a coffin is grounded in a reality that Fyffes’ management understands too well.

The report concludes, “Fyffes must stop denying the truth about the ongoing violations on the plantations, fully respect trade union rights to freedom of association and collective bargaining, and proceed with genuine, good faith negotiations with STAS to reach a legally-binding and enforceable agreement that will address and remedy all workers’ longstanding and ongoing concerns with the poor working conditions.”

Under ongoing pressure, in 2019 Costco and Whole Foods Market ceased their orders of Fyffes Honduran melons. In Europe, Salling Group (formerly Sansk Supermarked) and Tesco reduced other Fyffes fruit orders due to the violations. By following their lead, other grocery stores would apply pressure to Fyffes, making a strong statement that they stand behind their codes of conduct—and for basic human decency.

While corporate-driven initiatives have failed to defend workers, around the globe, organized workers are making strides for safer workplaces and livable wages. Even in the face of violent union-busting, workers have continued to advocate for protective equipment and conditions to make a better life for their families. Now it’s high time for Fyffes to join them at the bargaining table.