Last week in Paris, nearly 200 countries came to an agreement on how to address climate change by reducing emissions to slow the rising global temperature.

On Saturday, advocates for climate justice took to the streets, to have “the last word.” As it happened, negotiators missed their Friday night deadline over last minute disagreements, with the US threatening to pull out over funding mechanisms, so the agreement was not in fact signed until Saturday night. Though not the last word, the demonstration was a powerful reminder of the work ahead and the commitment of thousands of grassroots activists to do it. The energy was palpable and was echoed by solidarity events taking place around the globe.

Over 10,000 people showed up, mostly dressed in red, signifying the red lines that should not be crossed, and carrying signs demanding real solutions and climate justice. Phrases heard throughout the weeks before were again used here.  Phrases like, “system change, not climate change,” and “leave it in the ground,” referring to the need to stop extracting fossil fuels. This includes an end to fracking, a dangerous, dirty, and inefficient way to extract natural gas, and the anti-fracking movement was loud and clear throughout the two weeks in Paris. 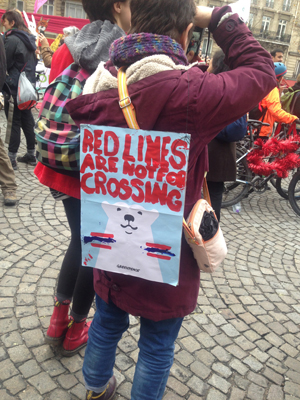 Fair World Project went to Paris with two main messages. First, not only do we need to leave fossil fuels in the ground, we can start drawing carbon out of the atmosphere with better farming. Putting carbon back in the soil will in turn create healthier soil on which to farm. The industrial agriculture system that is based on fossil fuels and monocultures leads to fossil fuel extraction from the ground. Small-scale farmers have been some of the first to feel the devastating effects of changing weather patterns that follow. We need to move toward a system based on agro-ecology and biodiversity that instead puts carbon back in the ground. 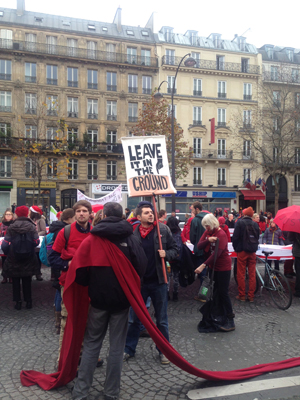 Trade policy and climate change reinforce each other, further marginalizing the same people over and over while concentrating power at the top.

So what is next? The good news is that the Paris agreement is not a disaster. But it is just a start. More is needed to close the gap between what is covered in the agreement and what communities, especially those on the frontline of climate change, need to be assured a good quality life on a livable planet.

What can an individual do? This answer came up at one of the panels held at the Climate Action Zone in Paris, and the best answer was simply, “get organized.” Find a group in your community working to oppose free trade agreements like the TPP, to democratize your community’s energy system, or to fight for a more just, sustainable, and healthy food and agriculture system. We have seen what the world’s governments are currently willing to do, now it is time for the people to step in and do the rest. 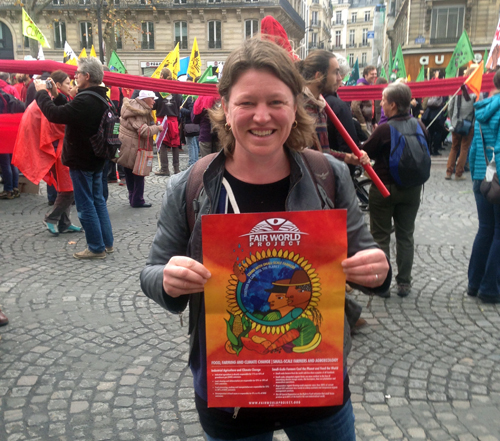