Fair Trade Denim. It sounds good, right? The press certainly thought so when J. Crew and Madewell launched their collections earlier this year. But, behind the buzz, what does it mean? Unfortunately, not as much as you think. 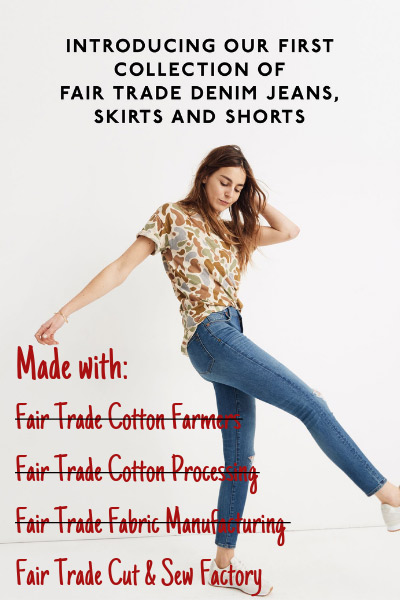 When you see this Madewell ad, it’s likely that you assume that the phrase “Fair Trade Denim Jeans” means that those jeans are made out of denim that meets some sort of fair trade standard, right? But Madewell and their parent company J. Crew are leading you on. The fair trade label they’re using just skims the surface of the complex fashion supply chain and only applies to the final stage of production. In an industry known for low prices and struggles for cotton farmers and deadly conditions for the workers who process the fibers into thread, Fair Trade USA has chosen to focus on just the factory where the items are cut and sewn into finished garments. That hardly seems fair.

For years, advocates have complained that their “Fair Trade Factory” label is confusing. And it seems that J. Crew and Madewell are more than willing to lean into that confusion.

Madewell calls it a “feel-good bonus,” but it’s really a bogus feel-good. That’s why we are calling on J.Crew and Madewell to put their money where their marketing is and commit to sourcing actual fair trade cotton for their so-called “fair trade denim.”

Madewell and their parent company J. Crew are certainly not the only ones in the fashion industry to hide their supply chains behind some pretty pictures. Indeed, the industry is so opaque that a few years ago when Fashion Revolution started posing the question #WhoMadeMyClothes, it truly was revolutionary. Their annual Fashion Transparency Index ranks top fashion brands on how much they disclose about their social and environmental policies, practices, and impact. J.Crew’s score? Just 12 points out of 250 possible. As Fashion Revolution notes in the Executive Summary to their Index, “Major fashion brands have the moral imperative and ability to effect change on a global scale for large numbers of people and that puts them in a really powerful position.”

But so far it looks like J.Crew and Madewell are dodging that responsibility. Good on You, the ethical fashion rating site and app has this to say:
“Overall we rated J.Crew ‘Not Good Enough’ as the brand has very few robust and tangible environmental and labour policies. Even though J.Crew’s website has extensive descriptions about steps to improve its impact on the environment, they mostly concern energy efficiency and don’t communicate sufficient information about the brand’s policies, which is why some people could consider that J.Crew is greenwashing.”

And, in the case of their denim, fairwashing.

Not Fair for Farmers or Workers

When it comes to sourcing raw materials, J. Crew has aligned itself with the Better Cotton initiative (BCI), an industry group that’s been widely rebuffed. A recent report concludes, “The BCI is failing to promote cotton that is truly better for the environment and to protect the health of cotton growers. Serious reform would be required for it to deliver on its promise; in its current state, it appears unreformable and should be scrapped.” While some product descriptions mention factories in Turkey, Japan, and Italy, where the materials come from remains unclear.

Instead of vague, weak corporate commitments, we’re calling on J.Crew and Madewell to do better. Plenty of fair trade cotton farmers exist; in fact, 57% of their crops don’t find fair trade buyers. J. Crew and Madewell could use their market power for more than marketing and build supply chains to bring those farmers’ crops to market.  Indeed, when big mainstream companies like this cash in on the movement built by and for small-scale farmers, supporting their supply chains should be the bare minimum—not just using their movement for some feel-good marketing.

Light wash, stone wash, acid wash, fair wash: regardless of your fashion preferences, one of these does not belong on your denim.

Send a letter to J.Crew and Madewell’s Director of Corporate Social Responsibility letting him know that you expect your fair trade denim to actually contain fair trade cotton. Enough with the fair washing!

“Drying Up” by Ricardo Gomez Angel @ripato on Unsplash
“Cotton boll maturing on Bobby Byrd’s cotton plant in Hale County near Plainview, Texas” by USDA NRCS Texas, is licensed under CC BY 2.0