Skip to content
FWP’s Fall 2015 Newsletter is available in print and online – View all our currnet campaigns and news in our Fall Newsletter: Trade for the benefit of the people, Raise the Minimum Wage, Climate, food and farm Justice, For a Better World Issue 11, Wal-Mart Excels at Greenwashing, Brewing for Justice…
Click Here to Download or Print
Trade For the Benefit of People

Fast Track is the bill needed to give the President authority to move forward with negotiating free trade policies such as the Trans Pacific Partnership (TPP). It is the way Congress says, “we trust your judgment and don’t need to see the details first.” But we do need to see the details first! Previous trade agreements like NAFTA—the North American Free Trade Agreement have had devastating effects on farmers, working families, and the environment. Congress has already granted the President Fast Track Authority. Now the only way to prevent another NAFTA disaster is to convince Congress to oppose TPP itself. Because they’ve granted Fast Track, Congress now only gets to vote yes or no on TPP after the text is finalized. They cannot vote to change or reject specific provisions. October 10-17 has been designated as International Days of Action for democracy, social justice, and public services. This is an excellent time to be visible about opposition of TPP and demands for fair trade that benefits people not corporations.
Lean more on our blog:
Momentum Gains to Raise Minimum Wage

July 24th marked the six-year anniversary of the last time the federal minimum wage was raised. In the meantime, many cities have had big victories in raising local wages, notably Seattle and Los Angeles will both raise wages to $15/hour. But six years is long enough for the rest of the nation’s low-wage workers to wait for a raise. Fortunately, new legislation has been introduced that would change that and raise the federal minimum wage to $12/hour by 2020 while gradually bringing the tipped minimum wage in line with the regular minimum wage.

Each year World Food Day – October 16th – brings today millions of people to address hunger, poverty, and malnutrition. This year FWP seeks to put the role of small-scale farmers and agroecology at the forefront of the global agenda to address the climate crisis as well as poverty. Industrial agriculture leads to malnutrition, inequality, and climate change, while small-scale farmers play a critical role in feeding the world while cooling the planet. World Food Day 2015 is our moment to firmly place the agroecology small-scale farmer solution at the forefront and grow a movement together.

Learn more and endorse the campaign at www.October16.org
FWP Fall 2015 Edition of For a Better World Available 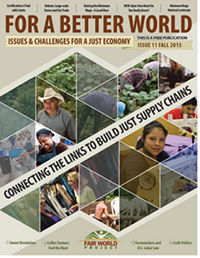 Like what you are learning here? Look for our free semi-annual publication For a Better World in your local fair trade store or natural grocer or co-op. In each edition we tackle issues and challenges of creating a more just economy. The Fall 2015 publication focuses on the worker issues like raising the minimum wage and how fair trade should addressed hired labor on large-scale plantations. We also hear the inspirational story of the creation of first farmer-owned organic sugar mill in Paraguay and Executive Director Dana Geffner talks about her own roots in fair trade and why fair trade crafts are so important in engaging in global political struggles.
Read For a Better World…
New Report Confirms Wal-Mart Fails Farmers and Workers; Excels at Greenwashing 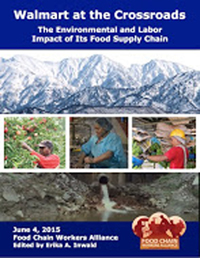 A new report from Food Chain Workers Alliance (FCWA) exams how well Wal-Mart upholds its own commitments and finds, despite big promises, Walmart’s claims amount to a lot of greenwashing while farmers and workers in the supply chain struggle. Despite a written policy that suppliers must comply with all national and local laws, the report found suppliers in violation of labor and environmental laws. One of its large seafood suppliers was exposed for ties to slave labor. Walmart made a 2005 commitment to 100% renewable energy for all stores. Ten years later its renewable energy in the US stands at just 16%. The report also finds small-scale farmers in the Global South are especially vulnerable to Wal-Mart’s practices and may struggle to keep their farms if Wal-Mart cancels a contract.
Visit FCWA’s website for full report
International Guide to Fair Trade Labels Now Available 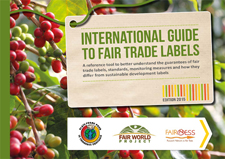 The International Guide to Fair Trade Labels, a joint project of the French Fair Trade Platform, Fair World Project, and FAIRNESS, provides detailed information on prominent global fair trade labels, reviews what the research says about the impact of fair trade, and details how eco-social labels like Rainforest Alliance are significantly different from fair trade labels.

Daniel Jaffee’s Brewing Justice: Fair Trade Coffee, Sustainability, and Survival has long been required reading for anyone serious about fair trade. It is now updated to include a new chapter analyzing the evolution of fair trade and the movement’s politics.
Want more frequent updates on issues like this? Sign up for our mailing list
Click Here to Download or Print this Newsletter [.pdf]
Share
Tweet
Pin
Email