And although this policy change is still listed as being in draft form and open for feedback, it appears Fair Trade USA has always had this policy, at least unofficially, as in these chocolate chips with fair trade cocoa but not fair trade sugar or vanilla, and using the older Fair Trade USA logo.

It is not just chocolate. In this iced tea example, tea is the very last ingredient, even though there is a fair trade label on the front.

Fair Trade USA argues that their new policy of allowing companies to use only certified cocoa, tea, or coffee allows brands who currently use no fair trade to have an entry point and to benefit farmers by opening up new markets. In our most recent publication, Nasser Abufarha writes that there is room in the movement for companies that are not fully committed to fair trade, but they should not be allowed to dictate the movement. Though Nasser is an independent contributor, his articulation in this case does reflect the view of Fair World Project also. Opening up markets for fair trade producers is important, as they are the core of the movement and the most important recipients of the benefits of fair trade. However, multinational companies who open new markets for a limited segment of producers should not be allowed to dictate the terms, especially at the expense of those committed brands like Equal Exchange and Alter Eco cited above who have made a full commitment to transforming trade and are leaders in the movement. If they need to compete against less expensive “fair trade” products, they face unfair competition. And if too many unknowing consumers choose the bars with fewer fair trade ingredients, that could in turn impact the farmers who supply them, including farmers of ingredients like fair trade quinoa and vanilla that are not included in the bars with only fair trade cocoa.

Fair World Project has made several recommendations for how Fair Trade USA can change its labeling policy to allow for the entry of new companies without creating unfair competition and consumer confusion in the market. 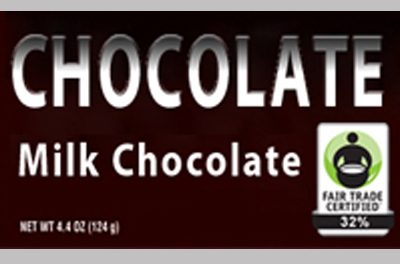 Another recommendation is to increase the threshold from 20% to 50% total fair trade ingredients before the fair trade seal can appear on the front panel. If they did this, fair trade cocoa in a chocolate bar such as in the example above would be designated as fair trade in the ingredient list, giving credit to brands who use fair trade cocoa, but the seal would not appear on the front of the packaging where it is likely to confuse or even deceive consumers and create a disadvantage for truly committed brands. Ideally the total percentage of fair trade ingredients would still be disclosed, but raising the threshold requirement even alone would go a long way to improving clarity while allowing an entry point for brands new to fair trade, and would be more in line with the policy requirements of IMO’s Fair for Life.

So far Fair Trade USA has not taken these recommendations. The current proposed change would drop the requirement that all ingredients that are available as fair trade be certified as fair trade in a multi-ingredient product. The proposal does not include mitigating changes like raising the threshold to at least 50% for the use of a fair trade seal on the front panel and requiring disclosure of the percentage of total fair trade ingredients. Therefore this change undermines the movement for transformative trade and caters to companies who want to receive an advantage in the marketplace while making a minimum investment in fair trade supply chains and in producers.