Fair Trade USA claims the decertification move was spurred by, “new evidence from trusted sources in Honduras which alleged recent violations of Fair Trade standards at the Suragroh farm.” While Fair Trade USA only saw fit to revoke the certification now, the Ethical Trading Initiative suspended Fyffes in May 2017 for violations in their supply chain.

In addition to Fyffes’ long legacy of documented violations spanning over a decade, ILRF, The International Union of Food and Agriculture Workers (IUF) and Honduran unions had provided ongoing evidence of labor rights violations to Fair Trade USA. Yet the certifier only took action after dozens of farmworker, union, advocacy and ethical organizations sent an open letter calling on Fair Trade USA to decertify Suragroh. Over 6,000 individuals also urged FTUSA to decertify Suragroh since December 1st.

Organized Workers are the Best Defenders of their Own Rights

Fair Trade USA’s certification of Suragroh was problematic from the start. This case underscores the folly of certifying plantations without the existence of a democratic farmworker union.

Human and labor rights are only as strong as they are enforceable. Farmworker unions can do critical things that Fair Trade USA, or any other voluntary certification, cannot. Workers are the best defenders of their own rights, and farmworker unions are democratically elected by the workers in order to represent the workers.  Farmworker unions negotiate legally binding collective bargaining agreements with local management which concretely hold bosses accountable.  This act of organizing is the only real way to bring justice for people into the workplace.

Fair Trade USA may aim to work with businesses “in good faith” to improve workplace conditions, but that does not replace the internationally recognized right to freedom of association. When workers’ right to organize is respected, labor rights can prevail. Without farmworker union representation and a collective bargaining agreement in place, any company is able to avoid accountability, no matter how many certifications they have or how many Corporate Social Responsibility (CSR) initiatives they tout.

In fact, what certifications and CSR can do is cover up workers’ organizing through union-busting and empower local management to continue abuse in impunity. This case highlights how an annual audit, in absence of farmworker union representation, is inadequate to enforce workers’ rights, especially in situations where historic conflict exists between workers and management. Our analysis and our partners’ findings on the ground suggest that their current systems are not adequate.

Our report, “Justice in the Fields” lays out the limitations and risks of Fair Trade USA’s hired labor standards. Over the past few weeks, partners at ILRF have confirmed that Fair Trade USA’s standards lack the requirement of having a democratically-elected farmworker union present – a real life important detail. For example, not requiring unions or worker representation to exist or be present in auditor interviews means that it is much harder for workers to trust or speak freely with auditors. Considering the evidence, the Suragroh case must be viewed not only as a victory against fairwashing, but an indictment against transforming a tool for organized small-scale farmers into a weak fair trade standard with poor enforcement.

In the end, Fair Trade USA made the right decision and revoked Suragroh’s fair trade certification. However, the fact that it took international outcry to call attention to problems when a simple Google search revealed Fyffes’ history of exploitation shows that there are serious flaws in their model. 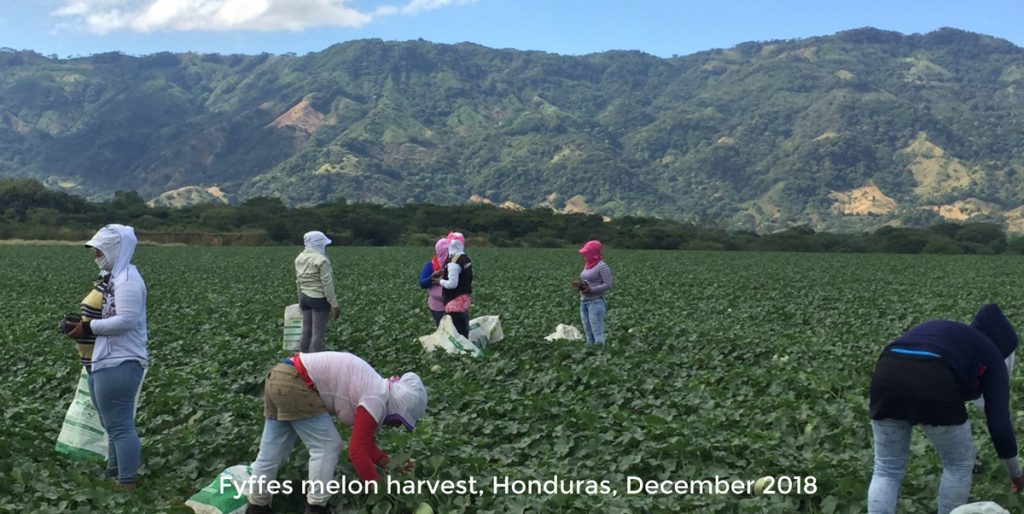 Moving forward, Fyffes must negotiate in good faith with STAS in accordance with Honduran law and ILO standards before recertification can even be considered. Despite the international condemnation, Fyffes’ refuses to take responsibility for the abuses in their supply chain. Considering their long legacy of abuse, all Fyffes’ supply chains, including those other supply chains certified by Fair Trade USA, must be reviewed with increased scrutiny. Supermarkets, like Costco and Kroger, must revisit their respective supplier codes of conducts to ensure that the melons, bananas, pineapple or other fruit that they offer to customers are not violating human rights.

There’s a long history of big fruit companies exploiting the workers in their supply chains. Despite supplier codes of conduct, international agreements, and voluntary certifications, human rights abuses continue. There are models that have made change in the conditions of marginalized workers. Yet just putting a label on a melon does nothing for the workers who grew it. Instead, it undermines support for workers’ campaigns and puts at risk the integrity of the term “fair trade,” undermining the movement built by small-scale farmers and their partners around the globe.

We can do better.