As of this spring, you can buy fair trade melons in the U.S. Good news? Unfortunately, no. Those melons come from multinational Fyffes’ Suragroh plantation in Honduras, the site of ongoing, unresolved labor disputes for more than a decade. Despite this ongoing, internationally reported situation, Fair Trade USA (FTUSA) went ahead and applied their label—and considerable marketing clout—to melons grown by workers suffering systematic human and labor rights abuses.

When labor rights groups brought the situation to their attention, Fair Trade USA didn’t admit to an error or take action to protect workers. And unfortunately, for those of us who have been in the fair trade movement for a while, that wasn’t a surprise. Instead, it’s consistent with a long-held pattern of putting market growth and corporate partnerships ahead of farmers and workers, the very people fair trade is supposed to benefit.

Since 2000, the fair trade marketplace has exploded with growth, with the emergence of many fair trade standards and certifiers, to say nothing of the multitude of phony claims in the marketplace. The organic certified market has thrived, in part, due to a vibrant community of farmers, consumers, researchers, and watchdogs that fight for the integrity of organic standards and products.  Though imperfect, organic standards and process incorporate public commentary and transparent process. As the fair trade market is private and unregulated, anyone can make any claim they like, and terms like “fair trade,” “direct trade,” “fairly traded,” etc., have proliferated. As a result, the fair trade market has become increasingly fractured, diluting the positive impact for producer groups.

In a controversial move, Fair Trade USA broke away from the international system in 2011. FWP opposed Fair Trade USA’s unilateral moves, including plans to certify large-scale plantations, while small-scale family farmers continue to remain without a fair marketplace.

Since 2012, Fair Trade USA has successfully eroded fair trade principles and practices with weak standards, a complete lack of transparency and zero accountability to producer organizations and networks.

Though the fair trade movement originally grew to support small-scale producer organizations, fair trade standards have evolved to include “hired labor” operations, such as the fair trade melon plantation at the heart of the current dispute. FWP’s report, “Justice in the Fields” examined the social and fair trade standards for farmworkers in the U.S. and globally. Fair Trade USA’s standards scored poorly in FWP’s analysis. Specifically, Fair Trade USA’s process and standard, “does not significantly involve workers in monitoring or enforcement or require higher than minimum or average wages.” Nonetheless, Fair Trade USA certified produce from plantations is entering the marketplace at an increasingly fast rate.

A second FWP report, “Fairness for Farmers” examines fair trade standards for small-scale farmers and details Fair Trade USA’s failings vis-à-vis other fair trade and social welfare standards. While Fair Trade USA includes some strong standards held over from the international Fairtrade system, “Fair Trade USA is neither owned nor governed by producers, which makes these weaknesses even more concerning. Other notable gaps in standards include a lack of required long-term commitment by buyers, no guaranteed producer input into pricing, no requirement for democratically-organized entities, and no safeguards to protect markets for smallholders.”

Both reports underscore both the limitations to Fair Trade USA’s standards, and the lack of accountability to stakeholders and the fair trade movement at large.

Growing the Market at a Cost to the Movement

Fair Trade USA has further eroded the spirit of fair trade by certifying a myriad of supply chains without concrete expertise, nor a commitment to true stakeholder accountability. For example, Fair Trade USA has entered the apparel certification marketplace, despite strong opposition from apparel unions and labor experts. FWP highlighted these concerns in 2014, noting, “rather than being a step in the right direction, this type of program misleads consumers, while stunting real progress — and in that way, it is worse than having no fair trade apparel at all.”

Fair Trade USA certified Fyffes’ Honduran melon subsidiary (Suragroh) in April 2018, despite a long list of serious human and labor rights violations. Those include failure to pay minimum wages, exposure of workers to hazardous agrochemicals, illegal firings of pregnant workers, blacklisting, harassment and illegal dismissal of union members. Workers report the company fails to provide them with statutorily mandated benefits, including denial of healthcare, social security, maternity leave, education vouchers, overtime pay, sick leave, and vacation. These violations have been documented in international press coverage and represent a labor dispute between the company and its workers that go back over a decade.

FWP and others in the fair trade movement have long argued that plantations have no place in the fair trade model. And labor rights organizations agree that the best way to protect workers’ rights is by organizing—the very sort of union campaigns that are currently being undermined at the Suragroh plantation. FWP’s open letter to Fair Trade USA highlights the standard’s shortcoming and the organization’s lack of commitment to farmworkers.

Consumer demand for ethical products is growing. But slapping a Fair Trade Certified label on human rights abuses is not the way to meet that growth. Indeed, as global inequality grows and climate change renders our food system evermore precarious, it’s clear that real change is needed. Millions of small-scale farmers around the globe are building strong, resilient organizations to tackle poverty and climate resilience in their communities. And committed fair trade companies are collaborating with them to build supply chains based on transparency, fair prices, human rights, and empowerment. Buyers should be able to trust that these basic values are what stands behind a fair trade label.

Instead, Fair Trade USA has prioritized market share and public relations over substance and accountability. While there may be a short-term feel-good moment in picking up a fair trade certified melon, it won’t last. By certifying these human rights abuses, Fair Trade USA is ignoring the very people whose livelihoods it claims to benefit. They are also risking the integrity of the word “fair trade,” rendering it meaningless and undermining the decades invested by small-scale farmers and their allies in building a movement.

Transparency and integrity are important, especially in a world dominated by the words “fake news.” That’s why we’re asking you to sign onto our letter to Fair Trade USA asking them to drop their Fair Trade Certified label from Fyffes’ melons immediately.

Your favorite grocery store probably also has a way to leave comment cards. That’s why we’re also asking you to share this message with them. Let them know that you’re concerned about fair trade melons, and that you are concerned about the use of the Fair Trade Certified label on produce from plantations in general. 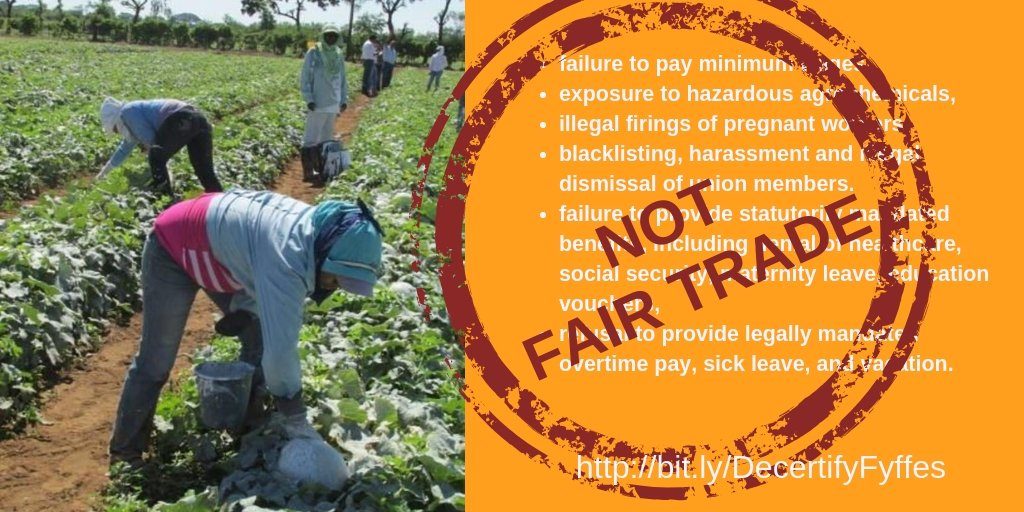