The climate is changing, and our industrial food and farming system plays a big role in that. Over the past few years, the movement for a food system that sustains people and planet has been growing. As conversations around topics like carbon sequestration that were previously just for academics and practitioners move into the mainstream, we cannot forget the people at the heart of it all: small-scale farmers and the movements that they have built.

What is Regenerative Agriculture?

Regenerative agriculture is often characterized as a holistic approach to agriculture that emphasizes the restoration of soil health. It builds upon the experiences and traditions of the organic practices and movements that preceded it. Those practices include conservation tillage, mulching, composting, cover cropping, crop rotation and restorative livestock integration – techniques drawn from the experiences and traditional knowledge of small-scale farmers.

The benefits of regenerative agricultural practices are multifold, including carbon sequestration, increased resiliency in the face of drought and extreme climate events, and improved production. While approaches and experiences will vary depending on a given agricultural scenario (row crops, agroforestry, livestock, etc.), regenerative practices in general are low-tech, often inexpensive and relatively easy to implement.

Regenerative agriculture prioritizes the utilization of on-farm fertility and resources. The traditional techniques that regenerative farmers utilize greatly reduce the need to purchase off-farm fertilizers, pesticides and fuel. These practices not only reduce costs for farmers, but build up soil and support farm resiliency. One simple way to understand regenerative agriculture at the farm level is to think of the farm and soil as a bank account. Industrial agriculture depletes the account by extracting nutrients, water and human dignity, leaving the farm worse off each year. Regenerative agriculture, on the other hand, adds to the account by gradually improving soil, increasing the farm’s capacity to produce safe and healthy food, and generating real value for farmers over the long term.

Given all this, why are more farmers not practicing regenerative agriculture today? The barriers are the same as those that have plagued farmers, including certified organic farmers, for decades: corporate consolidation of supply chains, including seed supplies, vanishing access to land, and unfair pricing and trade policies.

From Broken to Regenerative: Transforming our Food System

Regenerative agricultural techniques have the potential to feed the world and cool the planet, as increasing soil organic matter through proper regenerative management at a global scale can sequester multiple gigatons of carbon. But soil health is just one piece of the food system puzzle. To successfully transition from our broken industrial food system, rife with exploitation and fueled by destructive chemicals and fossil fuels, we need to transform that system into one which can bear the true costs of growing food.

To ensure that regenerative agriculture’s impacts and benefits are far-reaching and swift, we need to focus on several key economic aspects of the food chain: building solidarity with small-scale producers, supporting fair prices and practices for producers and workers in the supply chain, and raising the minimum wage. Furthermore, small-scale farmers must be afforded key protections as stewards of natural resources and the primary producers of food for the planet. Unfair trade agreements and national policies slanted towards big agribusiness are undermining small-scale farmers’ economic viability. Natural resources, such as land, seeds and water, are currently being privatized and stolen at an alarming rate. The commodification of the food system must stop if we are to sustainably feed a warming planet.

According to the Institute for Food and Development Policy, also known as Food First, small-scale farms around the globe are from 100% to 1000% more productive than industrial farms on a per acre basis. Measuring not just the yield of one or two commodities from a single farm, but the total production, including food, fodder, fiber and medicinal plants, it is clear that smaller farms overwhelmingly outperform larger farms. While large plantations can technically be certified organic, or even fair trade, they are incapable of competing with small-farms in terms of ecological, economic and social impact. Not all small-scale farmers practice regenerative agriculture, but regenerative agriculture is best practiced by small-scale farmers.

Numerous studies have demonstrated how buying from local businesses and farms has a multiplier effect, with money recirculating many times locally, magnifying the positive economic impact. Fair trade farmer organizations in particular have been especially effective at leveraging fair trade sales to create community and economic development programs that foster resiliency and self-determination. Large plantations, even those with ecological or social certification, ultimately do not have the same net positive impact as do small-scale farms, since monies ultimately leave the producer communities.

Though a small, but powerful, subset of the U.S. population denies the existence of climate change, corporate agribusiness is actively scheming to capitalize on the impending climate crisis. Under the banner of “Climate-Smart Agriculture,” agribusiness corporations like Monsanto and Yara, the world’s largest agrochemical and fertilizer companies respectively, are rebranding themselves as “climate smart.” Monsanto is now promoting its GMO crops as “ecological” no-till, in addition to purchasing start-up companies developing biologically-based pesticides and inoculants. Technical “fixes,” like the corporate climate smart agriculture approach, might have some negligible impact on reducing emissions or erosion, but they will not fundamentally enhance farm resiliency, as their objective is market consolidation, not the improvement of farmers’ livelihoods.

Small-scale diverse farms have proven to be more resilient in the face of devastating climatic disasters, like hurricanes and droughts. As noted by Eric Holt-Giménez, small agroecological farms in Nicaragua fared significantly better than large, conventional farms during Hurricane Mitch. This experience is reflected in rural communities, as extreme climate events, such as severe droughts, rains and radical temperature variations, have become the norm. 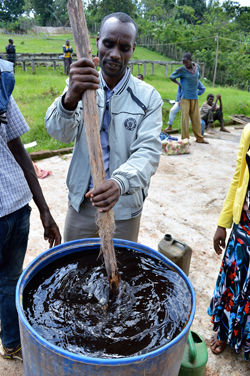 Over the last 100 years, corporate-driven industrial agriculture has been forced on farmers at home and abroad. Characterized by hybrid seeds that function only with external inputs, like chemical pesticides and fertilizers, and the use of specialized equipment and irrigation, industrial agriculture has imposed a model commanding short-term production over long-term sustainability. Farmers have seen increased yields, but also increased costs, often accompanied by lower prices, cutting deeper still into farmers’ margins. Compounding this problem, supply chains across various sectors, from grains and produce to meat and dairy, have been consolidated in the hands of a few large corporations, creating a de facto monopoly and driving prices still further down. According to the National Farmers Union (NFU), “farmers and ranchers receive only 15.8 cents for every dollar that consumers spend on food.” The rest is consumed by processors, traders and retailers. Low prices, coupled with high input costs and unfair competition, leave small-scale family farmers in a precarious position.

Many of the tools that have emerged from industrial agriculture have facilitated farmers’ ability to cultivate and harvest more acres with less labor. However, with falling farm gate prices and rising debts, many farmers have been forced to seek off-farm income. Interestingly, many farmers have actually recorded greater profits by reducing the number of acres cultivated, while increasing the diversity of crops and animals managed. Regenerative agriculture has the potential to support more families and to grow more nutritious food.

Paying for the True Costs of Food

If farmers and ranchers are to employ regenerative agricultural practices, feed their communities and cool the planet by sequestering carbon, they must be adequately compensated for their work. The fair trade movement provides an important framework to organize for the future. Fair trade principles, like long-term direct trading relationships, payment of fair prices and investment in community development projects, offer a road map for holistic and regenerative production. Fair trade certification is one pathway to appropriately compensate farmers for the true costs of production.

While the system of fair trade certification has its flaws, it does offer a model by which we can think about incorporating premiums for organic and social production into the cost of goods. Fair trade criteria establish a minimum price for a given item plus a premium for social development projects.

Fair trade also prioritizes close connections between buyers and farmers. By shortening supply chains, removing intermediaries and facilitating more value-added activities at origin, a larger percentage of a product’s value stays local in the producer community. These phenomena have a multiplier effect, spurring the development of local entrepreneurship and new services for local communities.

In addition to incorporating more farmers into fair trade relationships, it is critically important to create capacity to process fair and regenerative products. Though there are hundreds of millions of farmers and billions of consumers, the processing sector, from coffee roasting to grain milling, is small, consolidated and usually out of reach for many small-scale farmers. More development and investment is needed in local post-harvest processing sectors to make them dynamic enough to accommodate a wide range of products from diverse small-scale farms.

From Regenerative Agriculture to a Just Economy

Regenerative agriculture will incentivize new jobs – from new farmers and researchers to post-harvest processors and compost operators. The momentum toward a regenerative economy presents a truly once-in-a-lifetime opportunity to re-employ millions of people with meaningful, quality work. A critical first step in advancing regenerative agriculture is supporting the transition of current farmers, along with recruiting and training new farmers. A regenerative future will not only safeguard and sustain the 800 million small-scale farmers currently at risk, but it will also support a new generation of young farmers.

How to Grow a Fair Food System

There is a lot of work ahead to transform our food system and fully embrace regenerative agricultural principles. Here are a few steps that we can all take to help get us there:

3 thoughts on “Fair Trade is the Pathway to Regenerative Agriculture”