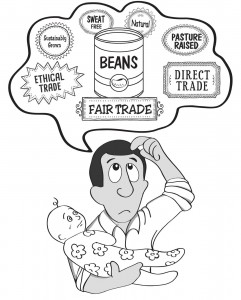 Over the last year, fair trade certifiers, previously focused on the Global South, have begun to turn their attention to food operations in the U.S. and Canada. Thanks to an upswell of local food initiatives — living wage victories, GMO debates and farmworker rights campaigns — people are starting to acknowledge the human and environmental degradations in the food system. As we become more exposed to the injustices that wind up on our tables, consumer demand for domestic fair trade products grows, but so too does consumer confusion. Like the organic movement in its infancy, the domestic fair trade movement is a veritable alphabet soup of overlapping market claims and conflicting definitions. If we want to bring the principles of fair trade to the Global North, we have to start with education.

Enter the Domestic Fair Trade Association (DFTA). The DFTA is a national coalition of farmers, farmworkers, retailers, processors and NGOs dedicated to health, justice and equity in the food and farming system. The diverse stakeholders of the DFTA are united by a common set of principles and their vision for an agricultural system based on trust, fairness and accountability throughout the supply chain. Domestic fair trade principles support small-scale farms, farmer-led initiatives such as farmer cooperatives, just conditions for workers, and organic agriculture. Since its founding in 2008, the DFTA has aimed to be a resource for consumers and to protect the integrity of their own strong principles so that “domestic fair trade” does not become subject to “fair-washing,” the watering down of standards for the purpose of garnering profits.
In early 2014, the DFTA published evaluations of six prominent fair trade and social justice certification programs. The purpose of the evaluations was to identify which domestic fair trade principles are being addressed well by certification programs, which ones are not, and ultimately which programs demonstrate best practices that could serve as a model for other programs. Members of the DFTA’s stakeholder groups worked together to approve the results of the evaluations through consensus: a decision-making process that seeks common ground and dialogue from its participants, who all have equal say in whether a decision moves forward. Given that our food and farming system often pits the needs of farmers and farmworkers against one another, this collaboration was a tremendous accomplishment — modeling the kind of relationship-building that the DFTA seeks to establish throughout the sustainable agriculture movement.

To give readers a snapshot of new fair trade projects in the Global North, we have summarized a few certification programs and used our evaluations to see if and how domestic fair trade principles are being upheld. Our hope is that the evaluations are not only a tool for accountability and continual improvement, but ultimately a consumer resource helping to connect people with products that truly reflect their values.

In early 2014, SunSelect Produce of Aldegrove, BC, Canada began to offer “Fair Trade Certified” peppers. Fair Trade Certified is the certification program of Fair Trade USA, a U.S.-based non-profit third-party certifier of nearly 12,000 products worldwide. The majority of SunSelect’s 120 employees are migrant workers from Guatemala, and the program emphasizes its community development premiums — funds specifically designated for social, economic and environmental development projects in their employees’ home countries. These funds are kept in a separate bank account and are managed by democratically elected representatives via a Fair Trade Committee. The committee, made up entirely of greenhouse workers, examines the most pressing needs of their communities and votes on how to best use the premiums.

While the DFTA found Fair Trade USA’s board to have strong stakeholder participation, an area of great concern is the certification program’s potential inclusion of large-scale operations and plantations. They also found apparent loopholes that could exempt small operations from key labor protections such as freedom of association.

Citadelle Maple Syrup Farmers Cooperative in Quebec, Canada became “Fair for Life Certified” in early 2014. Fair for Life is a certification program implemented by the Institute for Marketecology (IMO). Citadelle is the world’s largest supplier of 100%-pure maple syrup and represents more than one-third of the maple syrup producers in the province of Quebec. The cooperative offers its members various benefits, including free barrels, insurance, payment of a dividend when profits allow, and training. According to its Web site, Citadelle emphasizes its work to preserve the traditional structure of small-scale, family-based maple production. The company is also known for being socially responsible to its employees, the environment and the local economy.

According to the DFTA evaluations, Fair for Life performs well on the family-scale farm principle, exemplified by Citadelle’s certification. Unlike other certification programs, Fair for Life clearly defines “smallholder” in their standards and explicitly lists smallholders as a marginalized group under the program. In addition, Fair for Life does not allow for exemptions to labor protections, such as the right to freedom of association. In other words, all fundamental workers’ rights are protected without exception.

One area where the DFTA would like to see improvement, however, is in regard to the transparency and accountability principle. Information on the governance structure of Fair for Life is not easily available; references to it on the IMO and Fair for Life web sites are sparse, making it difficult to ensure multi-stakeholder participation.

Many of AJP’s standards were written to reflect the principles set forth by the DFTA. One of the DFTA principles where AJP’s certification outshines others is the rights of labor. AJP has solid stakeholder involvement, including workers’ associations and unions, in the monitoring of working conditions. AJP also scores very well on principles of governance, transparency, accountability and implementation — including posting extensive information about its decision-making and complaints/appeals processes on its web site. Some areas where the DFTA would like to see improvement, however, include offering credit to under-resourced farmers, strengthening language around community impact, and establishing a means to measure the program’s outcomes.

While all three certification programs examined here emphasize important and varied aspects of domestic fair trade, certification alone is not the final panacea to the creation of a more healthy and just food system. We do hope, however, that the evaluations serve as a tool for dialogue and clarity — and perhaps even collaboration between evaluated programs. The real work of the DFTA, then, is to ensure that the voices of the most marginalized people in our food system are heard at the table for these discussions, and that their leadership is uplifted by solidarity throughout the supply chain.

To view the DFTA evaluations in detail, please visit www.thedfta.org.