Fairtrade International recently announced that they are increasing the fair trade minimum price for cocoa. That’s a step in the right direction, especially as conditions for cocoa farmers grow ever more dire.  In 2017,  world cocoa prices plunged and have yet to recover.  Headlines continue to tie cocoa production to deforestation and child labor. Cocoa farmers continue to live in poverty, and climate change is only making the problem worse. You might have seen headlines warning of the coming “extinction” of chocolate if we don’t invest more in supporting the small-scale farmers who grow it. All that adds up to say—it is high time farmers get a raise.

The new minimum prices reflect a 20% increase for both conventional and organic cocoa, as shown in the table.

By raising these prices, Fairtrade International has set themselves ahead of other major ethical labels in the cocoa market. Fair Trade USA does not have a mandatory minimum price for cocoa, just a “suggested reference price” from which buyers and sellers should begin negotiations. Rainforest Alliance/UTZ Certified is not a fair trade label and has no minimum price for cocoa (or other products). Furthermore,  premiums paid for their certified cocoa have fallen by 1/3 over the past five years.

Meanwhile, more big chocolate players like Mondelez (Owner of chocolate brands such as Green & Blacks and Cadburys) are choosing to opt out of third-party certification altogether. Their Cocoa Life program includes no minimum prices for farmers, nor are premium investments farmer-led.

Even across ethical labeling, the race to the bottom continues. It’s good to see Fairtrade International buck that trend.

Fair Prices Are Good. Fair Livelihoods Are Even Better

Raising prices is a step in a good direction. What’s even better is that Fairtrade International is bringing the topic of living income into the pricing debate. So many crops (cocoa, as well as coffee and sugar) are, even in their fair trade versions, tied to the commodity markets. Notoriously volatile, these markets have never reflected a farmer’s cost of production.  Once upon a time, they bore some relationship to supply and demand, but now with increasing investment and speculation, even that connection grows more distant.

In addition to the mandatory minimum price increase, Fairtrade International has also issued guidelines for a living income for cocoa producers. Instead of starting from the market price, this calculation starts what it costs to actually live and builds to a farm gate price** from there.

This isn’t an easy topic to dig into: farmers everywhere often earn less than a real living income. In 2018, Fairtrade International released a report showing just how extreme poverty remains among cocoa farmers in Côte d’Ivoire. Even among fair trade farmers there, just 7% earn a living income, while only 23% earn enough to put them over the poverty line. 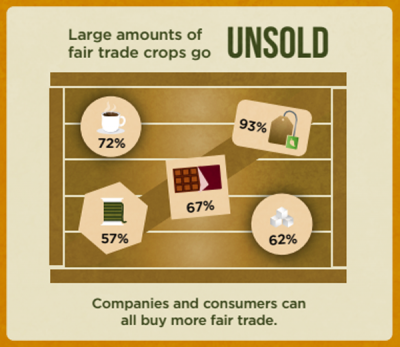 Increasing cocoa prices are key, yet if the commitment to supporting small-scale farmers ends there, it is not enough. Fairtrade International’s living income studies offer a good starting point for continuing the discussion.

The reality of a market-based system is that it pins one person’s livelihood on another’s choice. One further element of a farmer’s income is how much of their harvest the co-op is able to sell on fair trade contracts. Even when a producer co-op goes through all the work to become fair trade certified, 67% of that crop for cocoa farmers does not get sold on fair trade terms. That means any price increase in the fair trade system only impacts a fraction of their crops, diluting the overall impact. Instead of walking away and making up their own low-bar definition of what “ethical” or “sustainable” means, more companies need to embrace a model that keeps fair livelihoods at the center of the conversation.

Fairtrade International is the only one of the major players in ethical cocoa labeling taking the lead in focusing on fair livelihoods for farmers. They are also the only one of these major ethical cocoa labels that is 50% owned and controlled by producers. We think that is not a coincidence. As noted in our report Fairness for Farmers, who sets the standard matters.*** These price increases were voted on by a board of directors that includes producer representatives—the people who would be most impacted if these new higher prices cause still more big corporations to step away from a fair trade label. Meanwhile, the top-down ethical schemes continue to focus getting farmers to “farm better” while a few mega-corporations continue to reap all the profits of cocoa farmers’ hard labor.

Ninety percent of the world’s cocoa is grown by small-scale farmers. Increasing fair trade minimum prices is just one piece of supporting them and their work. Headlines continue to proclaim the end of chocolate. Yet what really needs to end is the idea that we can enjoy a chocolate bar when the farmer who grew it lives in dire poverty.

*FOB stands for Free On Board, a term from international shipping and business. In this context, it means that this price paid is for cocoa that has been loaded onto the ship for export and all expenses to transport and process the cocoa to that point, in addition to prices paid directly to farmers, must be covered by that price.

**A farm gate price is exactly what it sounds like, the price paid to a farmer for their product when they first sell it, not including the processing and transport prices that are included in the FOB price.

***The Small Producers Symbol (SPP) is the only small-producer owned certification. Their minimum price for fair trade cocoa has been $2400 with a $250 premium and $300 organic premium since 2010.